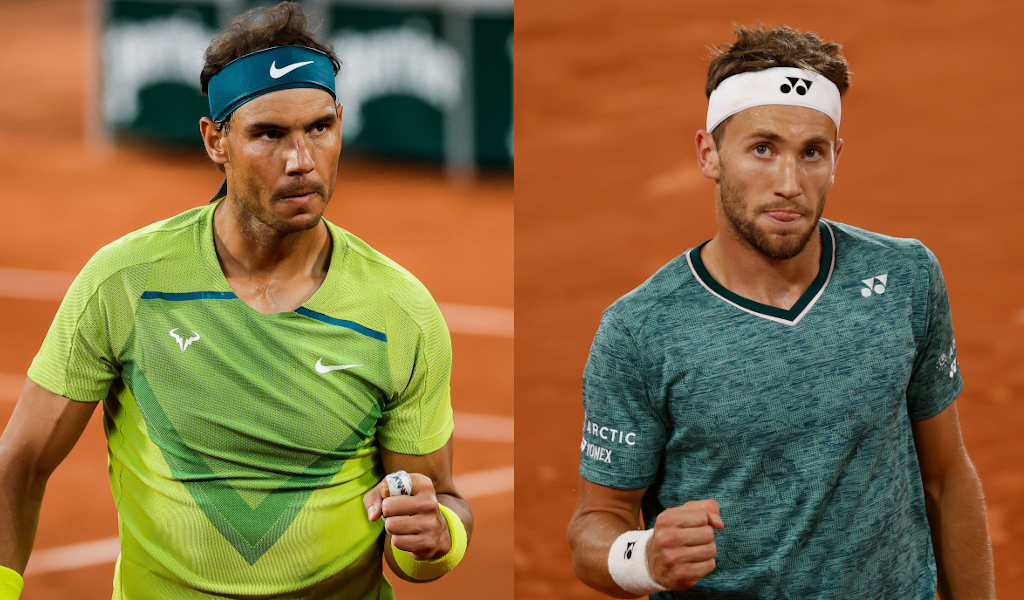 One player will be searching for a record-extending 22nd Grand Slam title and a 14th French Open crown while the other is gunning for his maiden major title. Who will come out on top of the Rafael Nadal vs Casper Ruud final at Roland Garros?

King of Clay Nadal reached his 14th final in Paris in mentally, physically and emotionally difficult circumstances as he was slugging it out with Alexander Zverev when the German picked up a “very serious” injury when he twisted his ankle.

Up until that point it was a war of attrition, but the record books will state that Nadal reached his 14th French Open and a 30th Grand Slam final.

On the other side of the net is a player featuring in his first-ever major final as Ruud booked his place with a four-set victory over veteran Marin Cilic.

Not only is Ruud looking to win his first Grand Slam, but he is also hoping to become the first Norwegian – man or woman – to win a major.

It will also be a battle of the ages as Nadal is 36, having celebrated his birthday on Friday, while Ruud is 13 years his junior.

Rafael Nadal played only five matches on clay en route to reaching the final at Roland Garros due to injury, losing two of those matches against Carlos Alcaraz in Madrid and against Denis Shapovalov in Rome.

You can’t say the Roland Garros darling did not work for his ticket to final as after straight sets wins over Jordan Thompson, Corentin Moutet and Boutic van de Zandschulp, he slugged it out in five sets against Felix Auger-Aliassime, then had a four-hour marathon against Novak Djokovic in the quarter-final before a three-hour slugfest against Alexander Zverev that saw them not even complete two sets.

🤯 @RafaelNadal with the perfect angle! 📐

Casper Ruud has a lot more mileage under his belt on the red dirt this year as he played in six clay-court tournaments before the French Open, winning the Geneva Open a fortnight ago while he also reached the semi-final of the Italian Open.

His route to the final was not as tough as Nadal’s, but he also had a couple of difficult days at the office as he played four sets against Jo-Wilfried Tsonga, five sets against Lorenzo Sonego and four in his last three wins over Hubert Hurkacz, Holger Rune and Marin Cilic.

Their French Open final clash will be their first-ever encounter.

They have shared a court together as a young Ruud attended a training session at the Rafa Nadal Academy back in 2017 and the Norwegian got to meet his idol.

“I fought, I have done all the things possible to give myself another chance to play in the final of Roland Garros. All the sacrifices and all the things that I need to go through to try to keep playing, really makes sense when you enjoy moments like I’m enjoying in this tournament.” – Rafael Nadal

“I’m just going to try to enjoy it. I will be the underdog, and I will try to, tonight and tomorrow night dream about great winners and unbelievable rallies, because that’s what it’s going to take if I want to have any chance, and I will need to play my best tennis ever. But I still have to believe that I can do it.” – Casper Ruud

He keeps on making history 🙌@CasperRuud98 is the first man since Robin Soderling in 2009 to reach his first Roland Garros 4R, QF, SF and final in the same year 🤯 @rolandgarros | #RolandGarros pic.twitter.com/SIYi2ssgDa

“Casper has a very good character to play tennis. He’s very relaxed, humble. He’s always in a positive mood about learning. I think in the academy we were able to help him a little bit during this period of time.” – Nadal on Ruud

On paper Nadal is clear favourite as he is not known as the King of Clay – and the King of Roland Garros – for nothing. He is gunning for an astonishing 14th title in Paris.

The way he dealt with Novak Djokovic in the quarter-final tells you means business, but while he will be the bookies’ favourite, there is hope for Ruud as that foot injury will always be in the back of everyone’s minds.

Twice this season he struggled with injury in matches and twice he lost as in the Indian Wells Open final he picked up a rib injury and was beaten by Taylor Fritz while in Rome his foot problem flared up and he also lost in three sets.

Nadal also looked a bit tired during the opening stages of the Zverev clash and struggled to hold serve so there will be opportunities for the Norwegian.

There will, of course, be nerves from Ruud and it is always hard to predict how a rookie will play in their first final, but when you are playing against the big guns you can’t give them a sniff of weakness and need to take every single opportunity that comes your way.

It is difficult to look past a Nadal victory unless his injury becomes debilitating.