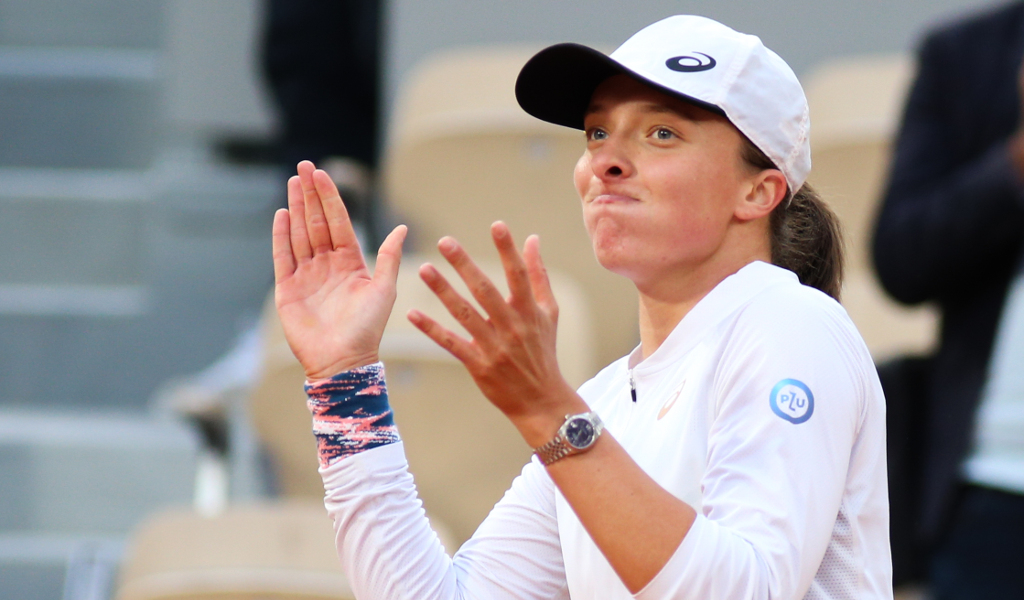 World number one Iga Swiatek had it all to during Monday’s come-from-behind victory over 19-year-old Zheng Qinwen at Roland Garros.

The 21-year-old Pole found herself a set down against her Chinese opponent during their Round of 16 clash, and credited her choice of music for turning around the match in the second set.

After losing a first-set tie-breaker, she won the next two sets 6-0, 6-2 to win her 32nd consecutive match and earn a place in the last eight.

Zheng Qinwen ‘wishes she was a man’ instead

“I was kind of singing songs, and I realised in the first set when I was really focusing on that technical stuff it didn’t really work because I got more and more tense when I couldn’t do that and why I couldn’t really prepare to the shot the best way,” Swiatek, an ardent AC/DC fan, said.

“I was singing in my mind, basically.

“That’s not the first time. I’m always singing something, but I changed the song.

“It was Dua Lipa, so kind of a guilty pleasure.”

📽️ It was a real battle for No.1 @iga_swiatek against Zheng Qinwen in their Round of 16 match:#RolandGarros pic.twitter.com/1FWNGZS5Im

Swiatek was thrusted into the position of the world’s best player following Ashleigh Barty’s surprise retirement earlier this year.

While a lesser player might have crumbled on the additional pleasure, Swiatek responded emphatically to any critics she might have.

“Well, I really enjoy when I have a request about what hour I want to play and they are actually listening. That’s nice… Maybe the gifts sometimes,” Swiatek added.
“Maybe that I can put more pressure on my opponents.

“I feel more pressure, so that is not enjoyable, but I have been doing well with that, I think.”

Former world number one Martina Navratilova admitted her disappointment with not seeing Barty and Swiatek compete against one another at their respective peaks, but has been thoroughly impressed by the top seed in Paris this week.

“It’s too bad because that would have been a great rivalry, but Iga’s got a lot of confidence now and she doesn’t seem to be bothered,” Navratilova told rolandgarros.com.

“The other day she was up a set and 4-1, serving just went away for four games and then she said ‘no problem, I’ll win the next three and win the match’.

“She just gets on with it. She really is great about staying in the moment and not panicking. She has confidence as well. She should because she’s moving well, she’s healthy and she’s hitting the ball great.”

🗣️ “I’m happy that I could play a little bit faster”

— No.1 @iga_swiatek on the keys to battling back today:#RolandGarros pic.twitter.com/SRK1gcW038

Meanwhile, former French Open champion Iva Majoli found it difficult to look past Swiatek for the title at the weekend.

“I’d still go with Iga. I think she’s having an amazing run. For me at the moment she’s the hardest to beat, but it’s sport so anything can happen,” Majoli told the same publication.

“[Jessica] Pegula’s been playing well. She’s an outsider but she’s going to be a dangerous one. Still a little extra to Iga though. I think it’s going to be interesting to see what happens.”