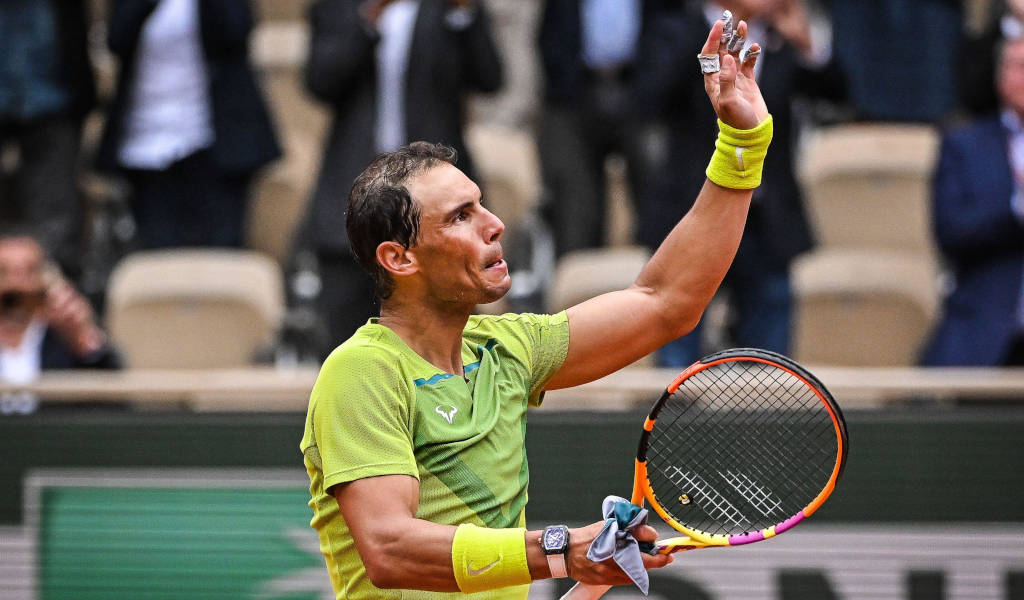 Roger Federer (369) and Novak Djokovic (325) are the only men to have more than the current Grand Slam singles titles record-holder.

Nadal’s French Open record now stands at a staggering 107 wins and just three losses since he made his sensational title-winning debut in 2005.

“I think it was a good match against a very difficult player with lots of talent,” said Nadal, whose build-up to the tournament was hampered by a foot injury.

“The last couple of months haven’t been easy. The victories help a lot.”

Nadal controlled the baseline and hammered Moutet’s second and first serve alike. The Raging Bull was truly on a rampage, claiming just under half (36/75) of his return points and converting seven of the 12 break points he earned in the match.

Moutet did his best to stay positive and found some success when he was able to get forward, and also a little joy from the occasional drop shot.

The young Frenchman enjoyed his best moment in the third set, when he even held an early 2-0 lead. Later he caused a little frustration for the Spaniard when he broke him yet again as he attempted to serve out the match at 5-3.

However, Nadal, who led 3-0 and 4-0 in the opening couple of sets, fired back with a vengeance and secured the milestone victory with his seventh break.

Nadal fittingly finished the match bullying Moutet’s serve and won the last four points of the match from 15/0 down on the Frenchman’s serve.

The 13-time French Open champions brought up match point with a clever drop shot of his own and clinched the match after getting the jet shoes on to haul in a drop shot from Moutet in the rally that followed.

“It was a great feeling in the stadium,” said Nadal. “I think the crowd was very nice with me too

“I really didn’t feel the crowd against me at all. I think it was a 50-50 and it was supporting good tennis.

“I always enjoy good support here in Paris. I think the people here know how special this place is for me and how important and how much respect I always had for Roland Garros.

“I think they appreciate all the things that I did in this event, so I feel a lot of love from the people here.

“I’m happy I am through in three sets, that’s an important fact for me and that gives me the chance to keep working tomorrow and try to be ready for after tomorrow against a tough opponent.

“So let’s see. I am happy about a lot of things that I did tonight, so let’s try to keep going and keep improving tomorrow.”

Nadal, who will face Botic van de Zandschulp on Friday, also suggested he was feeling healthy after his recent injury concerns.

“I can’t try to go very deep in a tournament if I’m worried about my physical issues every single day,” he added

“So if something happens, I am gonna accept it. But for the moment I am focused on the tennis.”