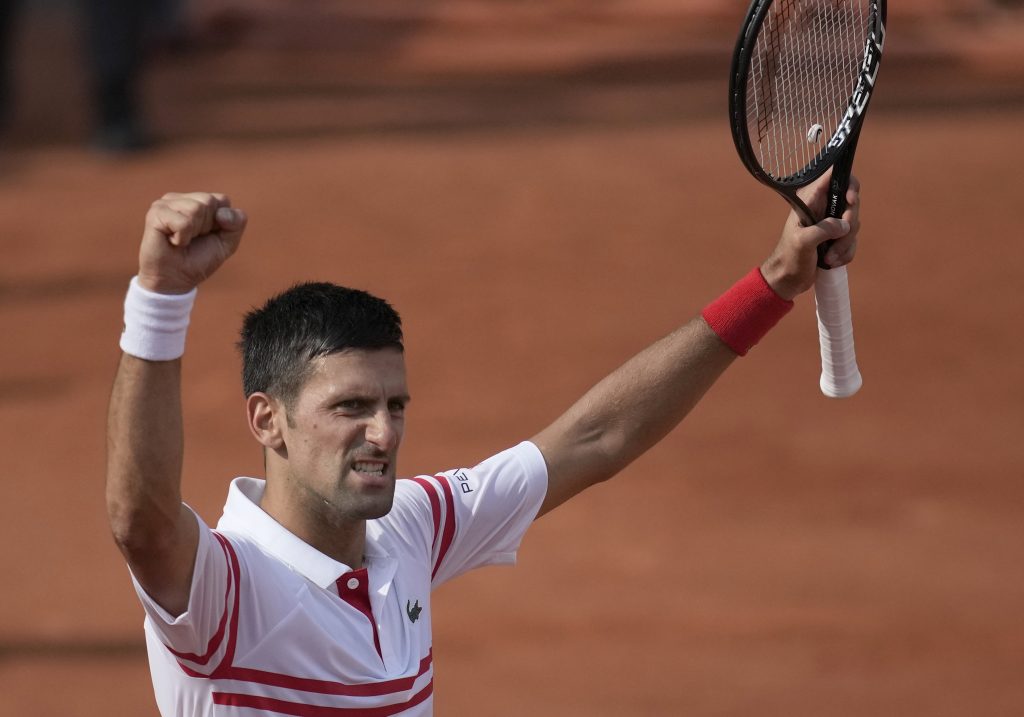 Novak Djokovic set a new record by sweeping into the fourth round of the French Open but a different future was also very much in evidence at Roland Garros on Saturday.

Djokovic needed just an hour and 32 minutes to defeat Ricardas Berankis 6-1 6-4 6-1, becoming the first man in the Open era to reach the last 16 in Paris for 12 consecutive years.

Next up he faces a player in 19-year-old Italian Lorenzo Musetti who has made it through to the fourth round on his grand slam debut.

A stand-out junior, Musetti has made a brilliant transition to senior tennis and claimed victory in his first ever five-set match, defeating fellow Italian Marco Cecchinato 3-6 6-4 6-3 3-6 6-3.

The teenager, whose flair and eye-catching one-handed backhand make him a hugely exciting player to watch, is looking forward to testing himself against one of the greats.

“I won three matches, three good matches with a lot of great opponents,” he said.

“We practised a lot with Djokovic, so we know each other a little bit.

“For sure there is going to be a little bit of tension, but I think it’s what I’m working for since my childhood. All the sacrifice and hard work I did became reality now. So I’m just enjoying the moment and I will try to do my best.”

He will certainly get plenty of respect from Djokovic, who said: “I think Lorenzo is very nice, first of all, very nice kid. I really like how he plays. He’s got a really all-around game.

“I know very much so that he is a big challenge to me. So there is no question I have to go out playing on a high level because he will not have much to lose. I’m sure he’s going to come out and really try to play the tennis of his life playing on one of the two big courts.”

Musetti was joined in the fourth round by fellow 19-year-old Italian Jannik Sinner, who so far has had no problem living up to the phenomenally high expectations placed upon him and is already in the top 20.

A quarter-finalist last year, Sinner had to battle through five sets in his first match but has been more convincing in each round, reaching the last 16 with a 6-1 7-5 6-3 victory over Mikael Ymer.

The pair could not be more different – the flamboyant, pony-tailed Musetti and the pale, metronomic Sinner – but together they are a potent force.

“Me and Jannik, I think we are the future of Italian tennis, and of tennis in general,” said Musetti.

“Of course he’s a bit further forward than me. I’m just living what he was living last year, so we are growing up together. But I have to focus on myself. I have to improve myself. Of course I’m really proud and happy that Jannik is still winning and is still going forward in the slams and is one of the best in the race.

“I think he deserves it, and I think we will have a lot of time together in the future. I’m happy about that.”

Spaniard Carlos Alcaraz, who only turned 18 a month ago, was hoping to make it a teenage triumvirate through to the last 16 but he was beaten 6-4 7-6 (3) 6-2 by German Jan-Lennard Struff.

Tenth seed Diego Schwartzman made the semi-finals last year and is having another good run, beating Philip Kohlschreiber 6-4 6-2 6-1 on Saturday.