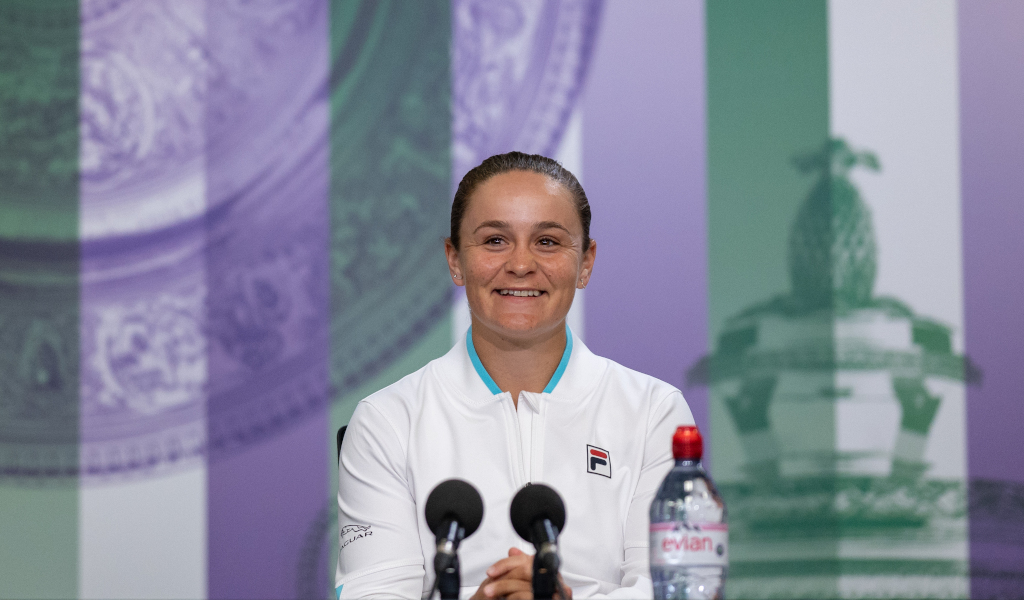 That role is traditionally reserved for the defending women’s champion but Halep was forced to withdraw with an ongoing calf problem on Friday, meaning the honour was passed to world number one Barty.

She said: “It’s incredibly special. It’s an opportunity very few people get to experience. Of course, I wish Sim was here to be able to experience that. She’s earned the right to open Centre Court on Tuesday as the defending women’s champion.

Ahead of the Order of Play being announced, we are pleased to confirm that world No.1 and top seed Ash Barty will open play on Centre Court…#Wimbledon pic.twitter.com/vd2sJjh2xi

“I’m extremely excited and humbled to have the privilege and to have the honour. I hope I can go out there on a really special occasion for Australian tennis with Evonne’s 50th anniversary.”

Evonne is Barty’s mentor Evonne Goolagong, who won the first of her two Wimbledon titles in 1971 at the age of 19.

“For me to be able to wear an outfit inspired by Evonne’s iconic scallop dress is really amazing. I wanted to make sure she was OK with it. I called her and asked her. She was really excited.

Barty will play her first match for almost four weeks since she was forced to retire during her second-round clash at the French Open because of a hip injury.

The Australian is positive about her fitness, saying: “Straight after Paris, obviously there was some time where we needed to digest what was going on. We needed to get a full diagnosis.

“We were able to do that, which is a really crucial part of my rehab. We’ve been able to go through the rehab, do what we’ve needed to do, give ourselves the best chance to play here at Wimbledon. Now I feel like I’m fit. I’m ready to play. I’m excited to play.”

Despite winning her first grand slam title on clay at Roland Garros two years ago, Barty has always been one of the few natural players on grass and someone marked out early on as a potential future Wimbledon champion.

The 25-year-old does not shy away from setting that as her goal, saying: “Over the last couple of years, I’ve learnt a lot about myself.

“And in particular last year, being away and not having the opportunity to play here at Wimbledon, it almost reminded me of how much I do love coming here and how much this tournament means to me.

“One day I would love to be the champion here. It’s a dream. It’s a goal. Dreams don’t always come true, but you can fight and do everything you can to give yourself that opportunity.

“That’s been a lot of my learnings over the last two years – not just as a professional tennis player, but as a person – is putting my hopes and dreams out into the universe and chasing them.”

Success for Barty on Tuesday would mean a Wimbledon farewell for her opponent, veteran Spaniard Carla Suarez Navarro, who will retire later this year.

Suarez Navarro, who is one of the most popular players on tour, returned to grand slam action at the French Open after recovering from Hodgkin’s lymphoma.

“It’s incredible to have Carla back,” said Barty. “She’s got this tremendous character of resilience and strength, longevity. I think for me to be able to experience opening Centre Court on Tuesday with her is going to be really cool.

“I hope that we have a great match. To see her doing what she loves again is really, really awesome.”