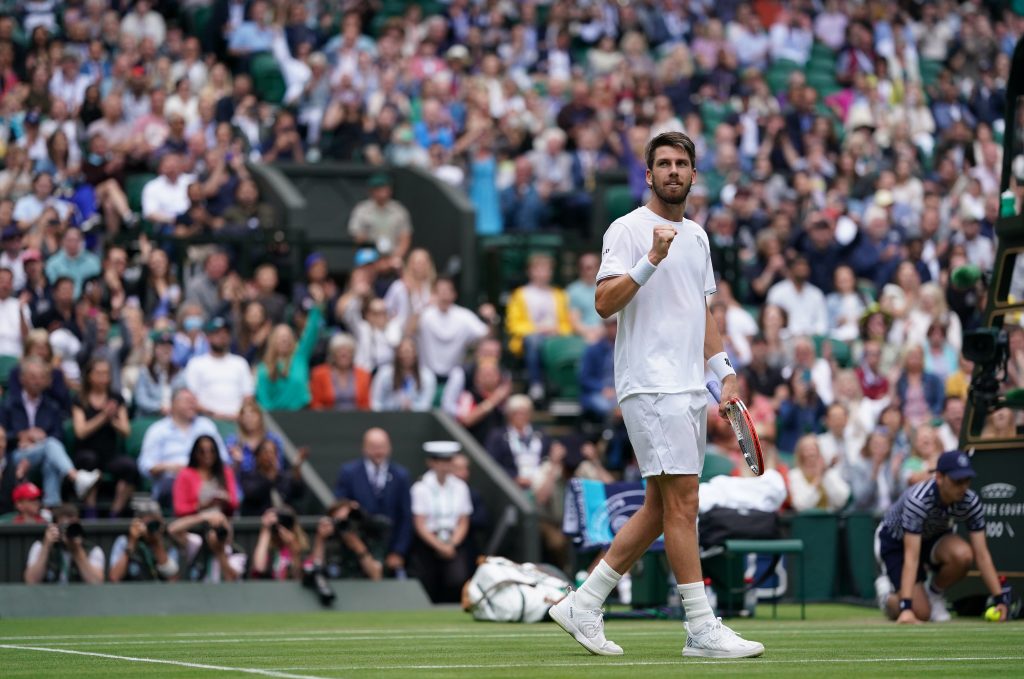 Cameron Norrie soaked in the biggest moment of his career after reaching the Wimbledon semi-finals in dramatic fashion then backed himself to defeat Novak Djokovic.

The ninth seed twice recovered from a set down to claim a 3-6 7-5 2-6 6-3 7-5 victory over Belgian David Goffin on a raucous Court One and become only the fourth British man in the Open era to reach the last four at the All England Club.

Norrie is not prone to great shows of emotion but he struggled to get the words out during his post-match interview.

“Just all the hard work and the sacrifices and everything kind of all hit me at once,” he said. “Especially the situation, here at Wimbledon in front of my family, my friends, and obviously a lot of people following that match.

“(I) got emotional there and (it was) just a crazy day and crazy match to get through, especially with the way that it started. That’s the reason why you play the sport.”

Norrie’s parents David and Helen have travelled over from their home in New Zealand to watch their son this summer, and the 26-year-old said: “I think every match that I’ve won this week my mum has cried.

Welcome to the semi-finals, @cam_norrie! 🇬🇧

“The matches are getting bigger and the moments are getting more special. I think they’re just super happy for me that I’m doing something that I love, and it’s just a bonus that I’m winning. I think it was probably pretty stressful for them today.

“They came over after the match when I was on the bike and both gave me a big hug, and my sister too. Very cool to have them here watching. Obviously very rare for them to be here, especially over the last couple of years.

“To see me playing at the level that I have been and to get some wins and to experience moments like that is exactly why they came.”

Norrie took over as British number one last October after winning the ATP tournament in Indian Wells in what was previously the biggest moment of his career, but he had been comprehensively overshadowed by Andy Murray and Emma Raducanu prior to this fortnight.

His profile has now sky-rocketed, with some fans rechristening the famous Wimbledon hill Norrie Knoll.

“I heard that as well,” he said. “I don’t even know what a knoll is. I would say it doesn’t roll off the tongue as well as Henman Hill.”

Norrie had played two of his best grand slam matches in beating American duo Steve Johnson and Tommy Paul in the previous rounds but he was unable to find the same form initially here against Goffin, a former top-10 player who has slipped down the rankings following injury.

The Belgian is one of the sweetest strikers of a ball on tour at his best and he deservedly took the opening set. Goffin looked to be on his way to the second as well when he broke to lead 4-3 only to unexpectedly throw in a poor game.

Norrie took full advantage by levelling the match but was 4-0 down in the third set in double-quick time.

He finally began to find his rhythm during the fourth set, urging the crowd to support him, who responded with frequent chants of “Norrie, Norrie, Norrie, Oi, Oi, Oi”.

He broke through after a long eighth game and appeared to have both the momentum and the stamina heading into the decider but Goffin withstood the pressure until the 11th game, when Norrie seized his moment.

The Duke and Duchess of Cambridge left their seats in the Royal Box to come and cheer him on, and Norrie said: “I didn’t notice that during the match but I saw them at the end there.

“So that’s obviously very special to be playing in front of them, and obviously they had more interest in my match, which is pretty cool.

“I think David did a good job of kind of hushing the crowd, he was playing at such a high level and was really giving me nothing.

“I think at the end of the fourth, that 4-3 game I really got the crowd involved, and from then on they were behind me every point. I think it frustrated him a little bit. Maybe that was the difference today.”

Norrie knows he will need to play better from the start if he is to have a chance of defeating Djokovic, who has only lost one completed match at Wimbledon since he was beaten by Andy Murray in the 2013 final.

Asked if he can win, Norrie said: “For sure. I think it’s obviously one of the toughest tasks in tennis. I’d say grass is his favourite surface and his record is unbelievable here at Wimbledon. It’s going to be tough.

“I’m going to have to improve a lot of things from today. I don’t think I’m going to have the chance to lose focus like I did today. I think I was a little bit fortunate. I’m looking forward to taking it to him and seeing the level he brings.”