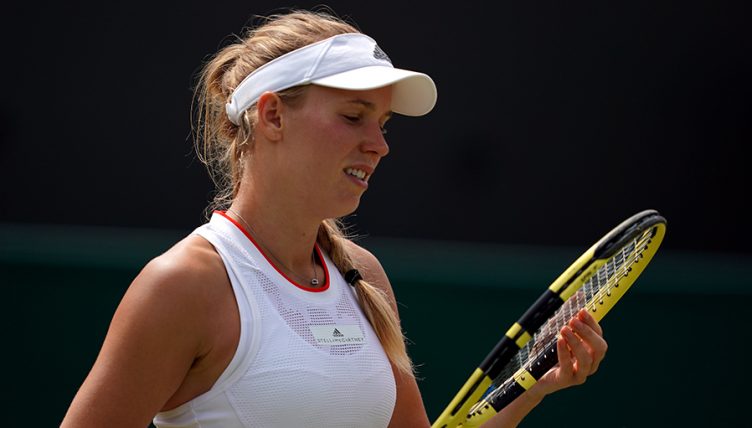 Caroline Wozniacki was left fuming as she exited Wimbledon on Friday, believing herself to have been the victim of two inaccurate Hawkeye calls.

The former world number one crashed out of the competition against China’s Zhang Shuai in straights sets, but it was technology that attracted her ire.

Twice, Zhang successfully challenged line-calls that were originally given as out, and Wozniacki was adamant the system had failed.

“How are we playing with Hawkeye that is this bad?” she asked the umpire after the second. “It’s not fair.”

“How am I supposed to play when every time the call is overruled? It’s crazy!”

Zhang took the match 6-4, 6-2, and Wozniacki’s rage hadn’t appeared to have eased by the time she spoke to the press afterwards.

“I thought there was a few ones that I saw way differently,” she said.

“But it is what it is. You can’t really change a Hawkeye call.

“Maybe it was right. I just saw it differently.”

China’s Shuai Zhang progresses to the fourth round for the first time at #Wimbledon as she beats No.14 seed Caroline Wozniacki pic.twitter.com/X356oNJ9sl

When asked whether the umpire was agreeing with her opinion, Wozniacki added: “Yeah, he was.

“But then again, there’s nothing you can do about it. It is what it is.”

“He said [they would look at the Hawkeye system] for the next match. Well, I don’t have a next match, so…”

“I mean, at this point it doesn’t matter. It is what it is. Maybe the Hawkeye was right. Maybe I just saw it wrong. I don’t know.

“But you trust Hawkeye normally. You trust that it tells you the right thing.

“Sometimes you do see the balls a little differently than what the Hawkeye is. At least you know, okay, you can get it out of your mind.

“I do believe that it was not in the ideal place today.”