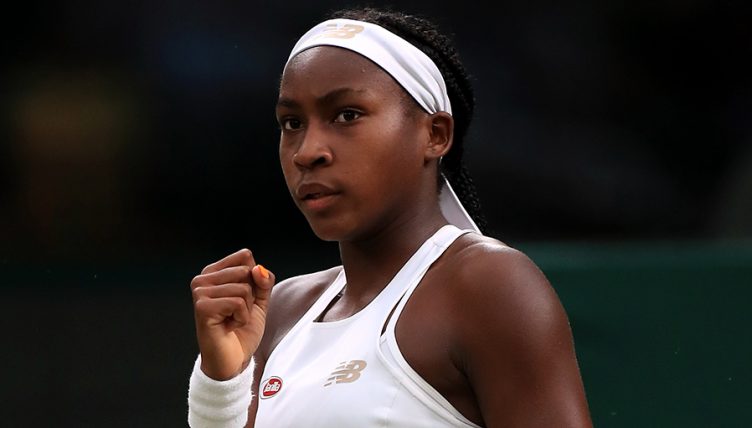 The players who make an exit on the second Monday at Wimbledon rarely leave a lasting mark on the tournament, but Coco Gauff is most certainly an exception to that rule.

As the 15-year-old who has created front and back page headlines during her remarkable run at the All England Club made her exit after a tight 6-3, 6-3 defeat against former world No.1 Simona Halep, she continued to show unnatural maturity and class as she sat before the media for a final time in this tournament.

There is every reason to believe Gauff will be back in the Wimbledon interview room as a Ladies’ Singles champion on more than one occasion over the upcoming two decades that will provide her with a chance to realise her sumptuous potential, but for now it was Coco the kid proving she is more than capable of holding her own in a grown up world.

“It’s crazy how big this story has gotten,” she declared, as she faced up to a packed interview room full of journalists hanging on her every word.

“The support I have received has been amazing and I hope everyone now knows that I’m a fighter. I’ll never give up. I hope the fans learned from me that, I mean, anything is possible if you work hard, just continue to dream big.

“If somebody told me this would happen maybe three weeks ago, I probably wouldn’t believe it. But I think just putting in the work definitely raised my confidence because I knew how hard I worked and I knew what shots I could make and what was possible.

“I’m only 15. Like, I’ve not nearly gotten or developed my game. I started tennis at six. I’m so excited to see, if I continue to work hard, what other success I can do in the future.

“Now I’m excited to go home now and see my family. I saw a video, they were saying they were so proud of me. That kind of makes me happy.”

“I’m going to do it online. I still want to go to college,” she stated. “Kind of like a requirement, I guess, from my parents. Obviously I’m still going to be playing professional. I’m definitely going to take some online courses. I mean, I’m still fairly new to high school, so I haven’t figured all that out yet.”

Gauff went on to list her idols as pop queens Beyonce and Rihanna and former US First Lady Michelle Obama, with the latter sending her a message of support on Twitter to salute her Wimbledon heroics.

“It meant a lot to me because I’ve looked up to her for a long time,” she said of Obama. “She’s such a role model. I mean, I was really shocked. I wasn’t expecting that. That was probably one of the least expected.

“I don’t even know who I was expecting from. Some of the celebrities that tweeted me I didn’t even know followed tennis. They probably don’t follow tennis, but it has been great.

As composed off the court as she is precocious on it, the Coco Gauff story is going to be the talk of tennis for years to come.