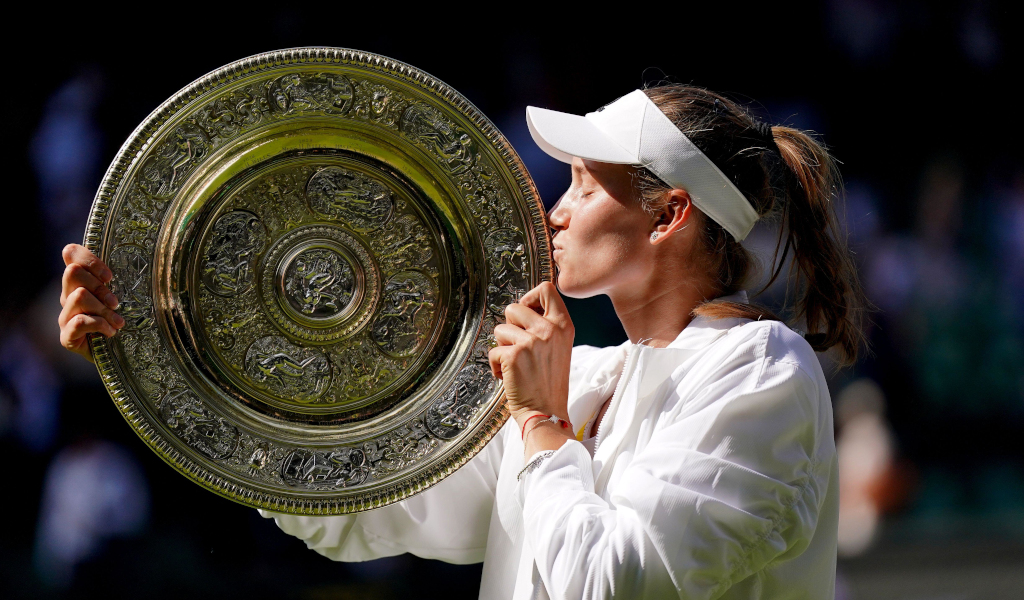 Elena Rybakina didn’t expect to make the second week of Wimbledon, let alone the final, yet she found herself to be the last woman standing and lifting the trophy after an excellent comeback win over Ons Jabeur on Saturday.

Both players were chasing history as Rybakina was looking to become the first player from Kazakhstan to win a major and Jabeur the first Arab and African woman to lift a Grand Slam trophy.

“I didn’t expect that I was going to be here in the second week, especially in the final,” Rybakina said after her semi-final win over Simona Halep. “I believed that I had the game to go far in the Grand Slams. Of course, I believed that maybe one day I could win it.”

And the “one day” arrived quicker than she had anticipated as the 23-year-old held her nerve on the biggest occasion, winning 3-6, 6-2, 6-2 in just under two hours on Centre Court.

Jabeur produced a magical first set with slices, a few drop shots and some brilliant angled shots as she broke twice to take the opening set in just over 30 minutes.

Rybakina started with some booming serves and held her opening game confident while Jabeur also replied with a solid service game, but the tide turned in game three as the Tunisian started to figure out the serves and the pace of her rival.

A couple of excellent returns put the pressure on the Kazakh and she crumbled as Jabeur broke before holding to go 3-1 up. The world No 2 then had two more break points in game five for an insurance policy, but Rybakina managed to hold this time.

After winning game eight to love, Jabeur turned the screws and Rybakina’s game disintegrate as the Tunisian took the set 6-3.

But if Jabeur thought she would run away with things then she was in for a big surprise as the 15th seed stepped up to the plate in the second set, breaking in the opening game with some brilliant winners, which was coupled with errors from her opponent.

With the nerves settling, Rybakina then produced a big a hold as she saved a break point to go 2-0 up, but both players started to produce some impressive winners as.

After Jabeur responded with a hold, having also saved a break point, Rybakina then had to pull out all the stops to keep the advantage, saving three break points in what was the longest game of the match.

And then it was Jabeur’s turn to crumble as an error-riddled game saw Rybakina go 4-1 up and she eventually served it out to take the final to a decider.

WE’RE GOING THE DISTANCE IN THE LADIES’ FINAL! 🔥🔥

Jabeur just never recovered her composure as she continued to make errors with Rybakina again capitalising in the opening game before holding to go 2-0 up.

The world No 2 had chances to draw level in game six as she found herself 0-40 up, but the Kazakh player came up with the goods to hold.

And that break took the wind out of Jabeur’s sails as she was broken again to give the 23-year-old the chance to serve for the title.

There was no mistake from Rybakina as she held her nerve, her serve and the Venus Rosewater Dish.