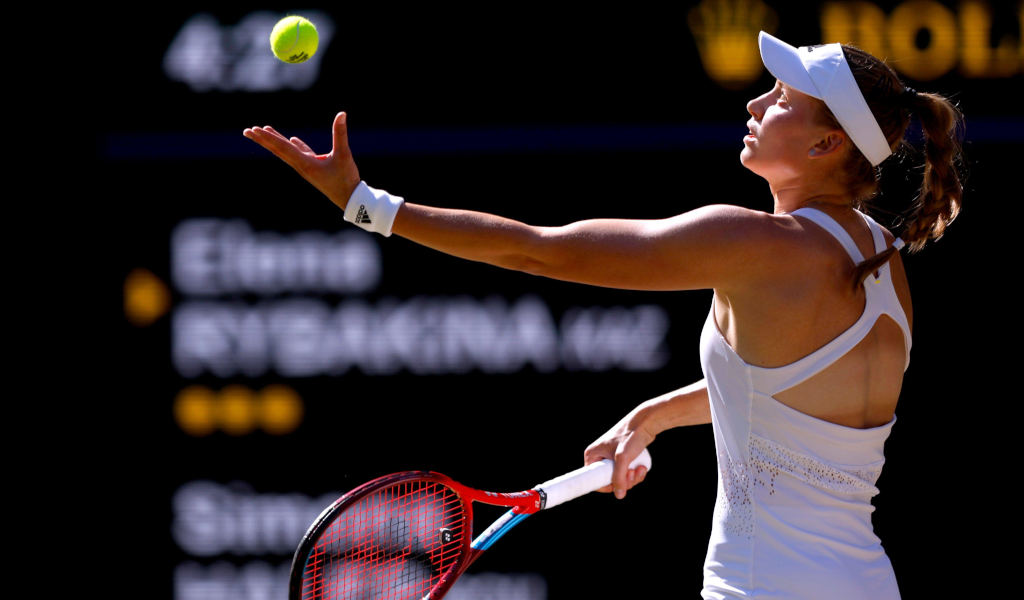 The 23-year-old’s relentless display of powerful hitting proved too much for 2019 winner Halep as a 6-3 6-3 victory booked a Saturday showdown with third seed Ons Jabeur.

Rybakina’s serve has been a great weapon, and she leads the WTA Tour aces chart.

Rybakina roars onto the biggest stage

Halep had blitzed her way past seeded opponents Paula Badosa and Amanda Anisimova as she looked for a third major title.

But the Romanian could not buy a first serve, with nine double faults to Rybakina’s five aces telling its own story.

It was a double fault, followed by a fizzing forehand winner, that gave Rybakina an early break.

But the pressure from Rybakina was telling and another double fault brought up a set point which Halep also had to negotiate to hold for 5-3.

It was just putting off the inevitable, though, with a 118mph ace giving Rybakina three set points.

Halep saved two but when a forehand floated wide Rybakina had impressively clinched the first set in 37 minutes.

Things went from bad to worse for Halep at the start of the second with two more double faults, the second on break point, putting Rybakina seemingly in control.

This time Halep was able to break back, but her good work was immediately undone by another serving blip.

At 5-3 on the Halep serve Rybakina struck the killer blow, a booming backhand down the line to secure her place in the final.

"It's time to enjoy and really have fun on court"

“Simona is a great champion but I was really focused today and really happy with my performance,” she said.

“I was nervous, of course, but the matches I had before on Court One helped. It was my first time on Centre Court but the atmosphere I had before helped me a lot.

“I think today I was mentally prepared and did everything I could. It was an amazing match.

“Ons is a very good, very tricky player and it’s not going to be easy to play her drop shots. But I think it’s going to be a great match.”