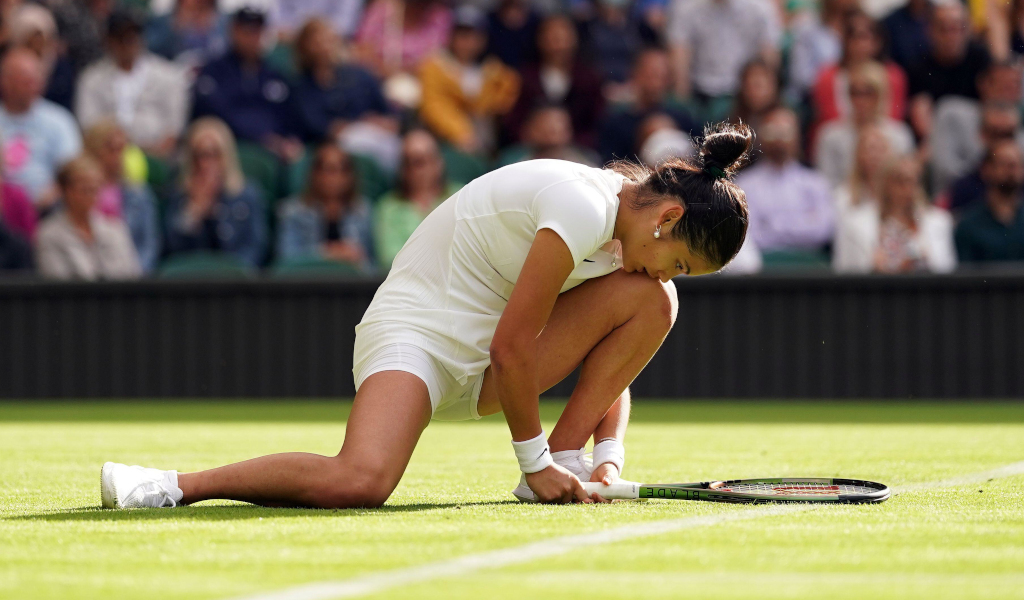 As Emma Raducanu’s Wimbledon dream died for another year, one attendee in the Media Room summed up the mood of disappointment: “What can we report on now? See you next year guys.”

A flippant comment from a member of the British media said all you needed to know about the deflation inspired by Raducanu’s second round defeat against Caroline Garcia.

While the teenager’s early demise did not come as a surprise for regular tennis observers, the evaporation of hope that the golden girl of UK tennis could carry the Wimbledon euphoria into the second week of The Championships was hard for occasional viewers to take.

Tennis writers won’t view Raducanu’s 6-3, 6-3 defeat against Frenchwoman Garcia as the end of Wimbledon, as there is so much to look forward to in the rest of this already compelling Wimbledon story.

Yet for the showbiz and news reporters who rock up to the All England Club for their only tennis job of the year, Emma was their big attraction.

This is a teenager who drives website clicks, sells newspapers and puts tennis at the forefront of the news in the UK, but there will be no fairytale run to the final of her home Grand Slam and by the time she returns next year, it is likely to be as a very different tennis player.

Raducanu was seeded 10th for this year’s Wimbledon, with the bulk of her ranking points collected in that remarkable ten-match-winning run that saw her win the US Open in historic fashion last year.

So with those ranking points likely to be diluted, there is a very good chance that Raducanu may return to Wimbledon as an unseeded player and it may be that her moment in the spotlight will be gone.

Yet it is far too early to write off a player who boasts a range of skills that are still developing, while the physical problems she has also been wrestling with should be resolved as maturity and strength is added to her fragile frame.

Uneducated cynics have been saying for several months that Raducanu somehow fluked the US Open and that it was a freak result that cannot be used as a gauge for her future prospects.

Yet the notion that luck was the overriding factor that drove a player to come through three rounds of qualifying and main draw matches of a Grand Slam event and win the tournament without dropping a set is as ridiculous on so many levels.

Raducanu would have been found out at some stage of her fairytale in New York if she lacked the sporting talent and all we have been waiting for since that moment has been her wait to recapture the form that pushed her to that moment of glory.

If she truly was superhuman, as it seemed at the US Open, Raducanu would have carried on winning as she made her debut in a host of WTA Tour events over the last year, but that was never a realistic goal.

And while anyone worthy of respect in tennis was warning that this will not be the year for Raducanu to shine at Wimbledon and patience is required as we join her on her journey, this Wimbledon exit will still be hard for her followers to accept.

The post-mortems may be brutal for Racucanu to consume as she failed to live up to the unrealistic hype around her on the biggest stage of them all.

Yet champions of Raducanu’s talent are rarely one-hit wonders and those who will write her off now may be forced to eat humble pie when she takes her US Open form back onto the match court over the course of a career that could still have more than a decade to run.