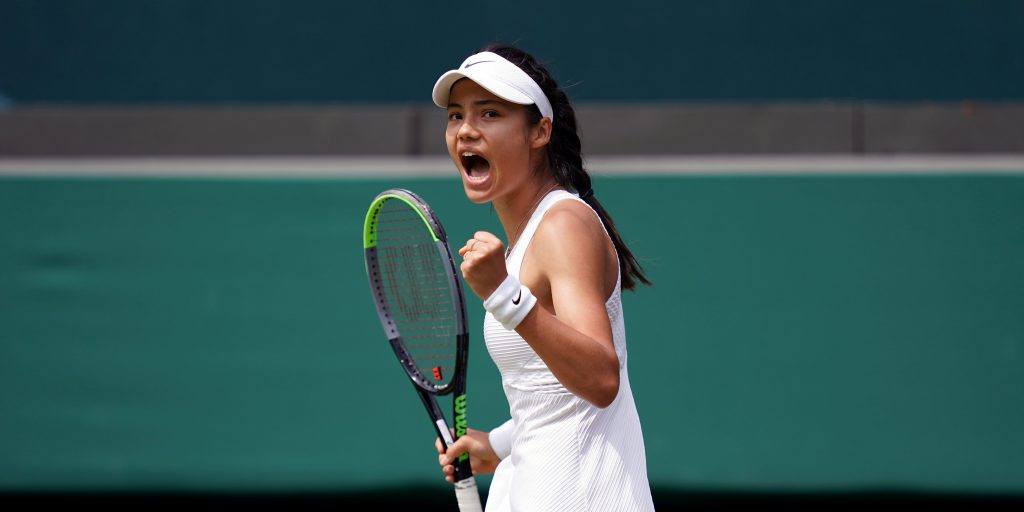 One look at Emma Raducanu was enough to convince tennis coach Matt James that he had a special talent on his hands.

A chance meeting with Nigel Sears, then working with the 15-year-old on a consultancy basis, at Wimbledon three years ago led to Welshman James being offered the chance to coach her day to day.

“You could tell straight away that she’s pretty special,” James told the PA news agency. “The mindset and the maturity on the match court you don’t see very often, I hadn’t seen at all really. So that was quite exciting.

“You knew she could handle the big occasions and it’s just a case of making those big improvements on the court to back it up.

“Obviously she’s a really bright girl and you can tell she’s so determined to excel in everything she does. It’s no surprise that she’s really good academically.

“When we were at Bromley (Tennis Centre), we were playing tennis in between her school sessions, whereas a lot of players her level would have stopped the education after GCSEs. But she’s really gritty and determined to do both very well, so credit to her.”

James worked with Raducanu full-time for just over two years, honing her game for senior tennis and helping her take her first steps on the professional tour before taking up a role as the Lawn Tennis Association’s National Tennis Centre Coach last October.

The teenager had success straight away in the lower tiers but she decided not to travel during the pandemic, focusing on her A levels and playing only domestically.

Was lucky enough to be given the opportunity 2 years ago to be involved with team @EmmaRaducanu. It has been one heck of a journey and can’t begin to describe how much I’ve learnt along the way off so many: Nigel Sears, Philippe Dehaes, @_markpetchey @annekeothavong… pic.twitter.com/Ii1ul6ts3H

She did not play a professional match between February 2020 and June 2021, so the fact she finds herself in the fourth round of Wimbledon four weeks later is an astounding achievement.

James is temporarily back as part of team Raducanu and sat courtside for her thrilling victory over Sorana Cirstea on Court One on Saturday.

He said: “The level that she played, I’ve seen that before, I’ve seen it on practice courts, so the tennis isn’t hugely a big surprise but some of the shots under sheer pressure really did surprise me.

“We know that she likes the big stage but she was still going into the unknown.

“This is the first time she’s fully committed to a tennis career so it’s great she’s had success so quickly. But it was just a case of when. It was going to be inevitable with her that she was going to burst onto the scene.

“It’s probably a little bit sooner than I thought because she hasn’t played many matches in the last year but she’s really taken her opportunity.

“She’s three matches in and physically she looks strong. She’ll be worrying all the opponents now.”

Raducanu is now working full-time with Sears, whose services are paid for by the LTA as part of the teenager’s Pro Scholarship Programme support for the best 16 to 24-year-olds.

That she has a hugely-experienced guiding hand will no doubt help given she has gone from virtual anonymity to the front pages of national newspapers in a week.

James, though, is not concerned about the huge interest in her, saying: “She’s a smart girl. She’ll take what she wants from it and she’ll be able to block out the rest.

…lots of blood, sweat and tears but incredibly proud of what was has been achieved, WTA 830 to 330 with 4 titles along way and a Fed Cup call up… she is going to be one serious player on the WTA tour one day and hopefully inspire lots of girls to pick up a racket… pic.twitter.com/OBip9fP30o

“She knows that there’ll be hype but she’s also been training for the big stage. Even years ago, we were talking about the best players in the world and saying, ‘This is how you’re going to be competing with them’.

“It was almost a motivation back then. It shouldn’t be a shock to her that she is now playing those people.

“And that usually spurred her on. I remember a few sessions where that really motivated her, wanting to be up there because she knew she’d have to work harder than the rest if she was studying.”

Next up for the 18-year-old is unseeded Australian Ajla Tomljanovic, who is 10 years Raducanu’s senior but also looking to reach a grand slam quarter-final for the first time.

“I don’t think Emma really fears anyone,” said James. “She’s beaten a few of the girls who are top 30 in the world in practice sets so it’s not a surprise the tennis is holding up. And it’s great she’s getting some experiences to elevate her even more.”