The sight of Court 17 at Wimbledon packed to the bursting point watching Gordon Reid MBE and Alfie Hewitt defending their Wheelchair doubles title at Wimbledon on the second Friday of The Championships was remarkable for a number of reasons.

Many of those crowded around a court that rarely gets too much attention on Men’s semi-finals day opted to watch Reid and Hewitt in action rather than taking up their seats for the epic Kevin Anderson v John Isner match.

Such is the captivating appeal of wheelchair tennis and the skills, speed and strength displayed by the athletes at the top of the sport that it has become one of the most popular events to watch on the outside courts at Wimbledon and now Reid wants to see his sport expanding once again in the coming years.

This Paralympic gold medallist and 10-time Grand Slam champion is an inspiration to thousands around the world and he sat down with Tennis365 for an exclusive chat just a few days after his third successive Wimbledon doubles victory.

Tennis365: How do you reflect on your latest Wimbledon triumph?
Gordon Reid: “It was a bit different this time. Our last two Wimbledon finals (2016 and 2017) have gone down to a third set tie-break so it has been stressful and emotional. This year’s final was bit different as we dominated the majority of the match and could maybe enjoy the victory a little bit more. We managed to produce our best tennis at the right moments in this tournament and to win it for a third successive year was a fantastic achievement.”

Tennis365: You had great crowds cheering you on at Wimbledon, so do you feel wheelchair tennis is growing in popularity?
Gordon Reid: “The matches we had out on Court 17 were packed and the noise the fans were making was fantastic. It’s great to get that kind of support. Then we moved on to a bigger court for the final and filled that out as well.

“I think people who have not seen wheelchair tennis before are surprised when they see it for the first time. The pace of the shots and the movement around the court seems to impress people and it was a big compliment to us that people left Centre Court and the men’s semi-final between Kevin Anderson and John Isner to come and watch us.”

Tennis365: Many British fans only get to see you at Wimbledon, so tell us about the rest of the year?
Gordon Reid: “I am a full-time professional tennis player. Travelling the world all-year round and in many ways, it is similar lifestyle to the guys on the ATP Tour every week. I played around 20 tournaments a year all over the world and we have a full-time training programme at home and all the top players in our sport are full-time athletes. This is what we dedicate our lives to doing.” 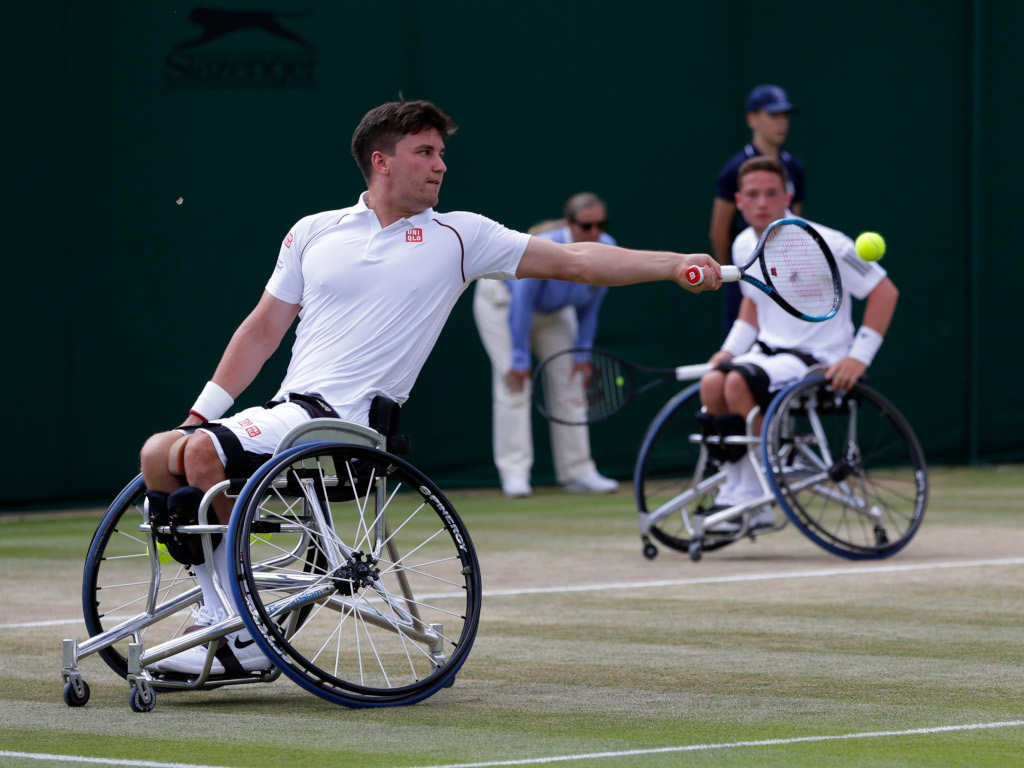 Tennis365: Did you ever imagine you could enjoy a career like this in tennis?
Gordon Reid: “As a kid, I used to watch Wimbledon and dream that one day I would be there. Now it is a dream come true to make it happen. When I first started out in wheelchair tennis, I was very young and just wanted to stay involved in the sport. I played as a kid before I had my issue and I never imagined I would have a career in the sport like this. Sponsorship and prize money have helped to take us to the level we are at in our sport now. There is a lot of travelling involved and that is where you need some backing to make it possible.”

Tennis365: Where can the sport go from here?
Gordon Reid: “It can always get better. I’ve seen the way the sport has improved over the last three or four years and the excitement levels and interest levels are growing rapidly. It’s a really exciting time to be involved in wheelchair tennis.

“The Australian Open are getting behind us and Wimbledon always gives us great coverage with the BBC and the media give us coverage as well, so there is real movement in the sport and organisers of the big events appreciate we can contribute to the event.
“The next ambition is to integrate a little more with ATP events and WTA events and that is where we can move things forward.”

Tennis365: You could be hailed as Scotland’s second greatest tennis champion behind Andy Murray, so how has he been with you?
Gordon Reid: “He has been great every time I’ve seen him. He’s a really friendly guy and always shows an interest in what I’m doing, so his support has been great. For a Scot to achieve what he has in tennis is fantastic and I would never try to compare myself to him.”

Gordon Reid spoke to Tennis365 in association with UNIQLO and Aberdeen Standard.