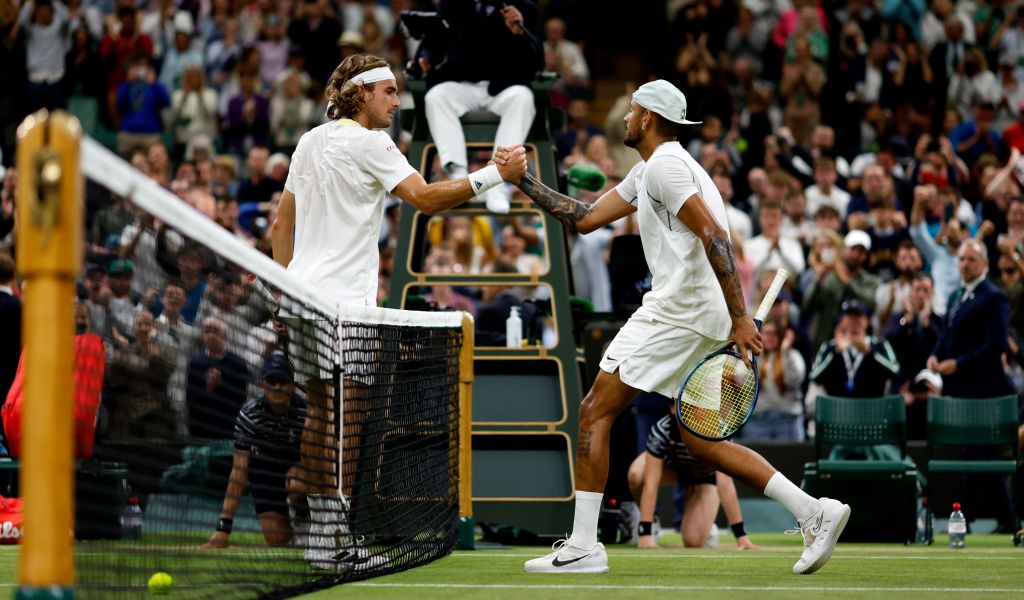 Stefanos Tsitsipas has been given the biggest fine of Wimbledon so far for unsportsmanlike conduct after his volcanic third-round clash with Nick Kyrgios on Saturday.

Tsitsipas received two warnings for hitting the ball recklessly, once into the crowd and once very hard into the backboard off a Kyrgios underarm serve, and has been hit in the pocket to the tune of 10,000 US dollars (£8,260).

That matches the fine given to Kyrgios for his antics during his first-round victory over Britain’s Paul Jubb, where he admitted spitting in the direction of a spectator who had been heckling him.

Kyrgios, who was himself fined another 4,000 dollars (£3,300) for swearing during Saturday’s match, appealed incessantly to umpire Damien Dumusois and other tournament officials for Tsitsipas to be defaulted for his first offence.

Tsitsipas flicked the ball angrily towards spectators sat courtside but Dumusois ruled the offence only worthy of a warning.

Players can be fined up to 20,000 dollars for an offence of unsportsmanlike conduct, while flagrant abuses can be deemed major offences and lead to further sanctions.

Tsitsipas apologised for his behaviour and admitted afterwards that he lost his cool at Kyrgios’ continued complaints to Dumusois.

The Greek, who also called Kyrgios a bully, said: “I have to say it was really bad from my side. I have never done that before, throwing the ball outside the court in that way.

“I did apologise to the people. I don’t know what went through my head at that time. I think also he’s part (of it), with all the circus show going on on the other side of the net.

“It started to become very tiring, in a way. I didn’t hit any people. It did hit the wall, thank God. For sure I’m never doing that again. It’s my responsibility, for sure. But there was also something that created that behaviour that I’m not used to seeing from myself.”

“I didn’t do anything. Apart from me just going back and forth to the umpire for a bit, I did nothing towards Stefanos today that was disrespectful.”

The Australian will take on American Brandon Nakashima on Monday for a place in the quarter-finals.