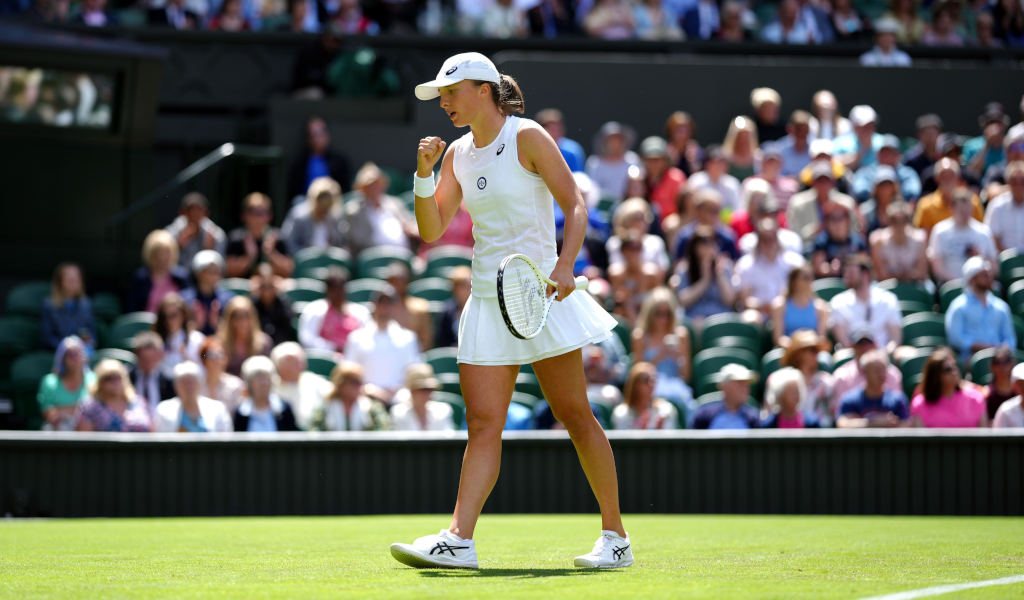 World number one Iga Swiatek went into the record books in style as she won her 36th match in a row with victory over Jana Fett on Centre Court.

Swiatek’s amazing streak, which goes back to February and has seen her win six tournaments, means it is the longest winning streak of the 21st century, overtaking Venus Willams’ record set in 2000.

The two-time French Open champion, a hot favourite for the SW19 crown, enjoyed the prestigious opening slot on Centre Court usually reserved for the defending champion and beat Croatian Fett 6-0 6-3.

Swiatek overwhelmed Fett in the first set but came to be heavily tested in the second stanza before extending her incredible streak.

Defending champion Ashleigh Barty’s retirement meant that Swiatek was given the honour of opening play on the main show court and she looked entirely at home, handing her opponent a 33-minute bagel.

This was the Pole’s first match since winning at Roland Garros and Fett, who has had an active warm-up on the grass, threatened a comeback as she led 3-1 in the second set.

She had three break points to make it 4-1, but Swiatek escaped and that was the end of it, as the Pole quickly rattled off five games in a row to continue her invincible streak.

Swiatek has now matched the 36-match winning streak Monica Seles rattled off in 1990.

Meanwhile, a second-round win for the World No 1 would see her tie Martina Hingis’ season-opening 37-match winning run back in 1997.

Swiatek will next face Dutch lucky loser Lesley Pattinama Kerkhove, who beat British wildcard Sonay Kartal 6-4, 3-6, 6-1 to reach the second round of Wimbledon for the second time.

Number five seed Maria Sakkari made light work of Australian Zoe Hives, wining 6-1 6-4, but 14th seed Belinda Bencic is out, losing 6-4 5-7 6-2 to Wang Qiang in a match carried over from Monday.