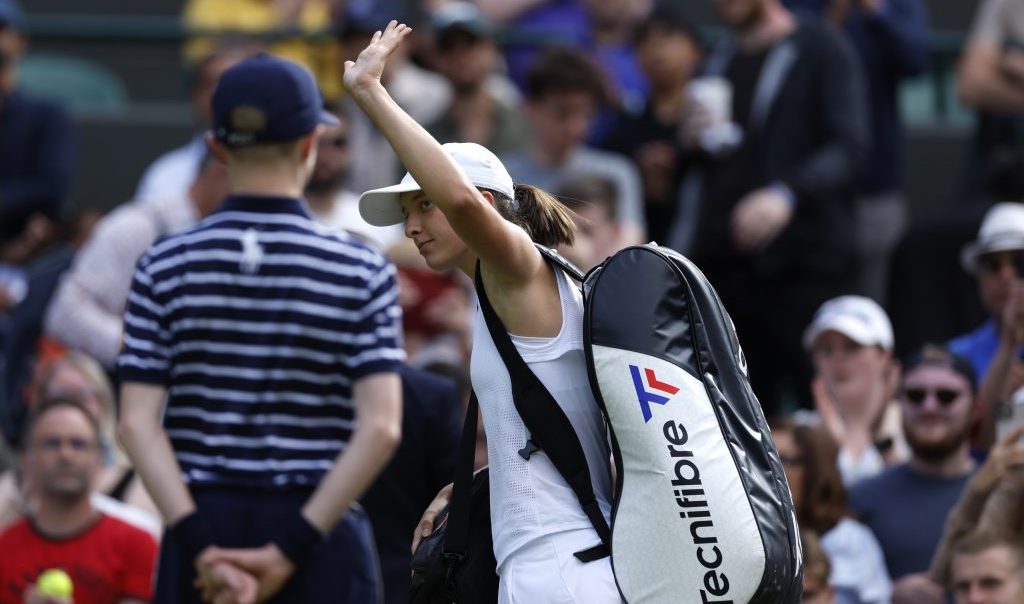 World No 1 Iga Swiatek insisted she would not be hard on herself after her remarkable 37-match winning streak came to an end at Wimbledon.

French Open winner Swiatek had not tasted defeat since February when she went down to Jelena Ostapenko in Dubai but had no answer to Alize Cornet who claimed a 6-4, 6-2 win on Court One.

Polish star Swiatek struggled throughout the third-round tie and served up 32 unforced errors to bow out of the All England Club on day six.

“I hope this is going to be the thing that I’m going to be proud of. I mean, right now even I am satisfied with this streak, so I’m happy that I was able to do that,” she reflected.

“Honestly, yeah usually I am hard on myself. Here, I know how I felt before matches, I know how I felt when I was practising. Let’s just say that I didn’t feel like I’m in a best shape, so I’m kind of aware that this could happen.

“Maybe it’s not the right attitude to have, but it is like it is.

“I tried many things to feel better on court, on grass court, but it didn’t really work out. That’s why I’m not even hard on myself because, like, it’s kind of logic that if I couldn’t find it even on practices, I’m not going to find it on a match.”

Cornet reflected on a second memorable result on Court One after she stunned Serena Williams in 2014.

The veteran equalled her best run in SW19 with success in one hour and 32 minutes.

“I have no words. It reminds me of the time I beat Serena on this court eight years ago so you guys are lucky for me,” world number 37 Cornet said.

“I am like the good wine in France. Good wine always ages well.”

It put the Romanian through to the fourth round where she will take on Paula Badosa, who fought hard to beat two-time Wimbledon winner Petra Kvitova.

Badosa blasts her way into the fourth round, beating Petra Kvitova 7-5, 7-6(4)

“I have a very tough draw. It’s like I’m playing grand slam champions every match. But still, I like these kind of matches.”

Eighth seed Jessica Pegula was another player upset on Saturday after world No 80 Petra Martic won 6-2, 7-6 (7-5) in an error-strewn last-32 match.

Tomljanovic’s reward is a meeting with Cornet while Rybakina will do battle with Martic for a place in the quarter-finals.