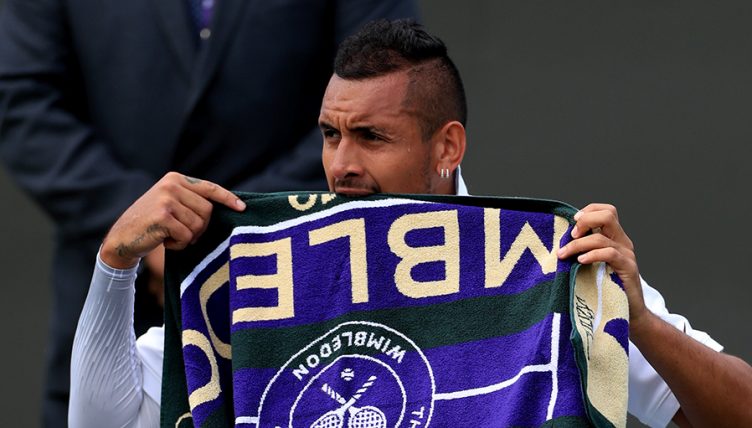 It was just another regular day in the confused and clustered office that Nick Kyrgios chooses to operate in.

His unfathomable five-set win against compatriot Jordan Thompson on Court 3 at Wimbledon offered the now familiar mix of underarm serves, emotional highs and lows and a bizarre fourth set that Kyrgios lost 6-0 as he appeared to be trying to get to 0-40 in each game before trying to come back from the brink.

Somehow, he managed to recover his composure in time to win a deciding set 6-1 and line himself up for a potentially explosive Centre Court clash with Rafael Nadal on Thursday, with Kyrgios suggesting his apparent eagerness to concede a set against Thompson was all part of his master plan.

“If a boxer puts his hands down in a fight, does that mean he’s not trying? Yes, no? What’s that? It means he’s trying or not trying? That my question,” said Kyrgios, as he snapped back at his inquisitor in packed main press conference room at Wimbledon.

“Could be a tactic, couldn’t it? How did the tactic pay off today? Good question,” he sniped before adding: “Oh, this is fun.”

Kyrgios went on to suggest his on-court antics were good for the game, as he hinted some of his rivals should follow his lead and entertain the crowds.

“I think everyone just goes about their business the way they are,” he continued. “I think that the sport has a serious problem with that. I mean, just because I’m different, I go about it a different way, it causes a stir.

“I understand that people are different and people are going to play different. If everyone was the same, it would be very boring, no? I mean, I don’t think there’s a shortage of entertainers. I just think people go about it differently. Different perspectives. I don’t understand why it’s so hard for people to understand that.”

There were nervous sniggers from many in the room as Kyrgios then turned his thoughts to his next opponent Nadal, just a few weeks after he suggested the Spaniard was ‘super salty’ in another feisty press conference.

Kyrgios famously beat Nadal at Wimbledon in 2014 and he is eyeing up a repeat after insisting he relishes the chance to play against the giants of the game.

“Not sure that me and Rafa could go down to the Dog & Fox and have a beer together,” he added, before suggesting his feud with the Spaniard was started after a fiery exchange with Nadal’s uncle Toni.

With that Kyrgios left the room grumbling about the questions that had come his way.

Love him or hate him, this maverick of the game cannot be ignored and there is no doubt his re-match with Nadal will be the headline act at Wimbledon on Thursday.