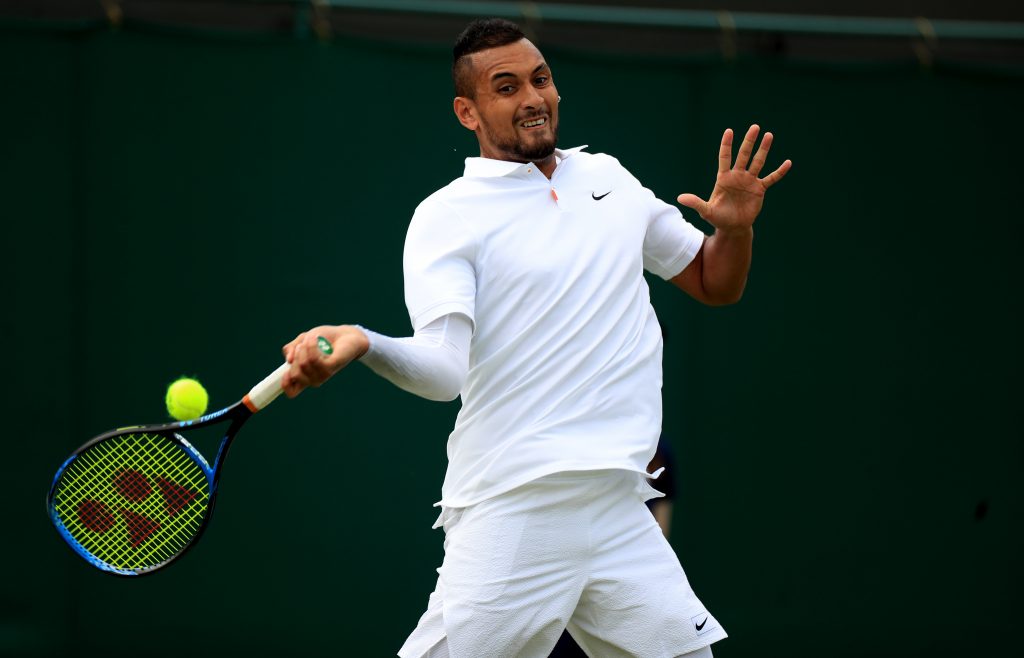 Nick Kyrgios is planning to ‘get strawberries and chill’ on his Wimbledon vacation – but he hopes winning can be on the agenda.

The 26-year-old has left Australia for the first time since before the coronavirus pandemic began and will take on French 21st seed Ugo Humbert in the first round on Tuesday.

It is a repeat of a second-round match at the Australian Open in February where Kyrgios, playing in just his second tournament in nearly a year, showed once again that he commands an occasion like no one else with a raucous five-set win that brought life back to tennis.This is his first tournament since his home grand slam, with his plans to play in the grass-court warm-up events curtailed by a neck problem.

“I feel decent for not playing a match in however long,” said Kyrgios at the All England Club on Saturday.

“That time at home was amazing. Wimbledon is an event I never take for granted if I can play it so I made the trip over. I know it’s not going to be easy to just turn the switch on.

“I can’t expect myself to be playing the best type of tennis like I was a couple of years ago at Wimbledon. So I’m not putting too much expectation or pressure on myself but generally I feel pretty good.

“I feel physically not bad, I’ve been hitting a fair bit on the grass and trying to get two hits a day and just trying to find my feet.

“I definitely feel that I could beat 50 per cent of the draw on grass without much preparation. I know for a fact that no one here wanted to play me in the first round and I feel completely confident going into this match.

“I just want to go out there and have some fun. I haven’t been on a tennis court for a while. It’s Wimbledon, it’s the pinnacle of tennis. I’m going to get myself some strawberries and chill.

“I’m using this as a vacation. I’ve been in Australia now for a year and a half. I’ve reached a really nice level of freedom. Nothing fazes me at all any more.”

Kyrgios is planning to play the US hard-court swing including the US Open but how long he stays on tour, especially given the difficulties in travelling back to Australia, remains to be seen.

“I didn’t feel at all that I had to play,” he said. “When I was at home I wasn’t looking at any results. I was happy without tennis. I just feel like I’ve got a little bit left to give to the game, I feel like a lot of people are wanting me to play.”

Kyrgios, who revealed he will be teaming up with Venus Williams in the mixed doubles, has been both a crowd favourite and pantomime villain since making his big breakthrough at Wimbledon in 2014 with a run to the quarter-finals.

“That’s probably the one thing I’ve missed about tennis is I feel like I have this platform, this power that tennis has given me that I can kind of do what I want,” he said.

“I feel like it’s just ironic that at the start of my career it was like I was a disgrace to the game, all this b******t, now it’s every time I literally touch a court it’s fully packed and I’m always on the tennis social media.

“I played two tournaments in a year and a half and as soon as I draw Ugo it’s like the match of the tournament. It’s pretty funny.”