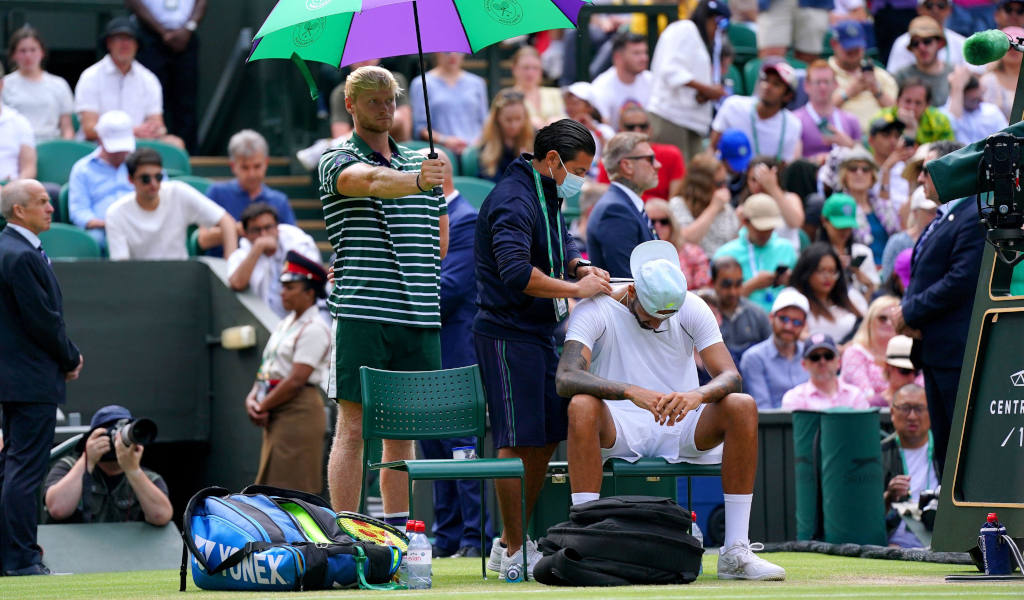 Nick Kyrgios battled past Brandon Nakashima and into the quarter-finals of a grand slam for the first time in seven years but struggled with a shoulder problem that could jeopardise his chances of going further.

After the drama and recriminations of his clash with Stefanos Tsitsipas, this was a much less tempestuous affair, with Kyrgios largely keeping his behaviour in check on Centre Court.

It became obvious during the first set that all was not well physically but Kyrgios recovered from a set down and then clinched the decider against 20-year-old American Nakashima, winning 4-6 6-4 7-6 (2) 3-6 6-2 to set up a quarter-final against Chile’s Cristian Garin.

He has reached the last eight at slams twice before, on his Wimbledon debut in 2014 and then at the Australian Open the following year, losing at that stage both times.

Putting aside all the antics of Saturday night, Kyrgios had played a supremely good tennis match, raising hopes – or fears – that he could challenge for the title.

This was a very different assignment, though. Nakashima, who has climbed the ranks swiftly since leaving college in the US, is a consistent, level-headed young player who was never likely to become riled by Kyrgios’ behaviour in the way Tsitsipas did.

There was still some showboating – an underarm serve in only his second service game and a wholly unnecessary between-the-legs shot in the fifth game of the second set – but it soon became clear Kyrgios had other things on his mind.

The 27-year-old began holding his shoulder and grimacing, and a half-hearted service game saw him broken to lose the opening set.

He called the trainer and took a couple of pills after three games of the second set, by which time he was unexpectedly a break ahead thanks to a couple of double faults from his opponent.

Even a poor line call did not prompt anything more than a raised eyebrow from Kyrgios, who began to look more comfortable and raise his service speeds as he levelled the match.

The trainer returned to the court after five games of the third set and this time Kyrgios did take a medical time-out to have his shoulder worked on.

One fan has got no time for Nick Kyrgios' complaints! 😅#Wimbledon #BBCTennis pic.twitter.com/Nx8FykY4m4

The trainer continued to massage the Australian’s shoulder at changes of ends but he was still serving strongly and moved two sets to one ahead after playing an excellent tie-break.

Nakashima, whose expression had barely changed throughout, stayed right in the match, though, and got his reward in the seventh game of the fourth set with a break of serve.

Kyrgios allowed some emotion to show, ranting at his support camp, and his focus had gone completely as he dropped serve again two games later, rolling in serves, including one underarm effort, and slapping groundstrokes away.

He was switched on again at the start of the decider, though, and, after briefly engaging in words with umpire Nico Helwerth over a line call and being told to “stop moaning” by one spectator, broke the Nakashima serve to lead 2-1.

The crowd were fully behind the Australian when he broke again two games later, and he did not look back as he maintained his record of never having lost a five-set match at Wimbledon.