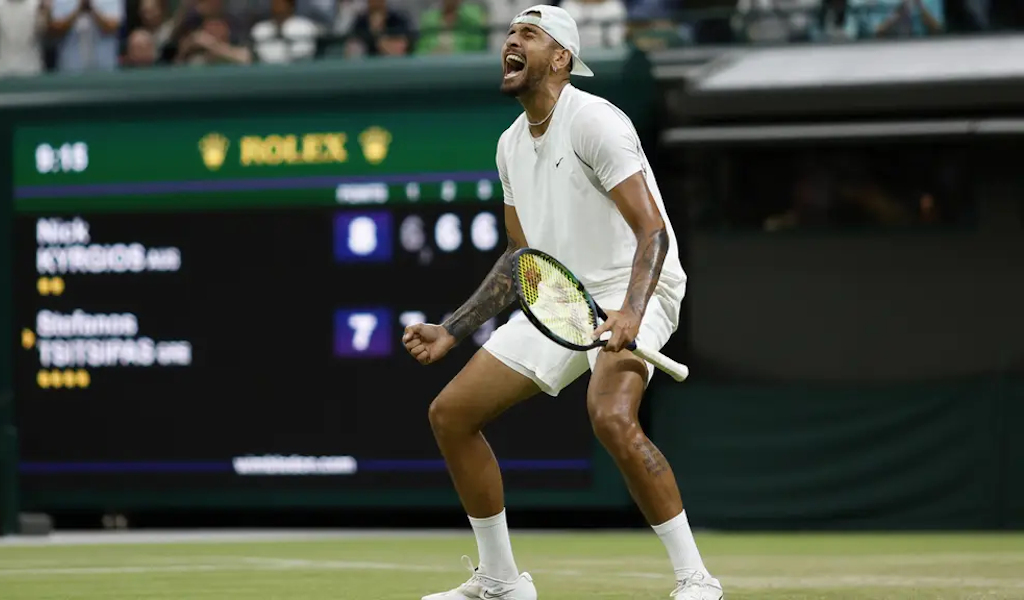 Nick Kyrgios is just one match away from a place in the Wimbledon final after steaming past Cristian Garin in straight sets.

The controversial Australian, whose antics this fortnight have thrilled and appalled in equal measure, reached the last four of a grand slam for the first time with a commanding 6-4 6-3 7-6 (5) victory.

Kyrgios, now 27, has long been regarded as having all the talent to win major tournaments, but almost none of the application.

But after cruising past Garin – and armed with a 2-0 winning record over most likely final opponent Novak Djokovic – the self-styled bad boy of tennis might finally be about to come good.

“I never thought I’d be in the semi-final of a grand slam,” he said. “I didn’t go about things great early in my career and I thought my ship had sailed. I’m really proud of how went about things out here.”

His run to the semis may have been marred by run-ins with umpires, line judges, opponents, the media, the crowd and the fashion police.

But Kyrgios was on his best behaviour – relatively speaking – on Wednesday, even striding on to Court One in white trainers rather than his preferred red ones which breach the strict SW19 dress code.

Garin, the world number 43 from Chile, had never won a match at Wimbledon before but got a lucky break when his first-round opponent Matteo Berrettini, the eighth seed and among the favourites for title, withdrew due to Covid.

The draw opened up invitingly for the 26-year-old, who comes from a country which does not even have any grass courts, but his luck ran out against Kyrgios.

Yet in a bizarre start to the match Garin won the first eight points to lead 2-0.

But Kyrgios, amid the constant chuntering and gesticulating towards his box, broke back for 3-3.

Kyrgios, again taking far longer between serves than he had in his fiery third-round win over Stefanos Tsitsipas, was then gifted the opening set by four unforced errors from his increasingly nervous-looking opponent.

An early break in the second, to love, courtesy of more loose shots from Garin, put Kyrgios in complete control.

Garin, to his credit, proved a tough nut to crack in the third and took it the distance, and it would not be a Kyrgios match without the inevitable disputed line call – this time on match point – before a Garin forehand floated wide to rubber-stamp his opponent as a Wimbledon semi-finalist.