Three-time Wimbledon champion Novak Djokovic has conceded he will have to wait until Friday morning before he fully appreciates the extent of a knee injury he picked up in a 6-1 6-2 6-1 win against Pablo Zeballos on Thursday.

Djokovic is due to take on Britain’s Kyle Edmund in the pick of the third round matches on Saturday, but the Serbian confessed he will need to assess his fitness before deciding whether he is fit to play.

“It was a bad move during the point. It affected my knee a little bit,” he told the media at Wimbledon. “I felt it all the way to the end of the match basically, last couple games.

“I’ve been doing checkups now. It seems like it’s nothing major. Hopefully, you know, tomorrow I’ll see on the practice session how it feels. Hopefully it’s going to be fine.

“It’s not a tendon. When I say ‘not major,’ if it was major I’d be pulling out from the tournament. What I’m saying is that it’s most likely a twitch, you know, in the muscle or something like this that has affected the knee a little bit. 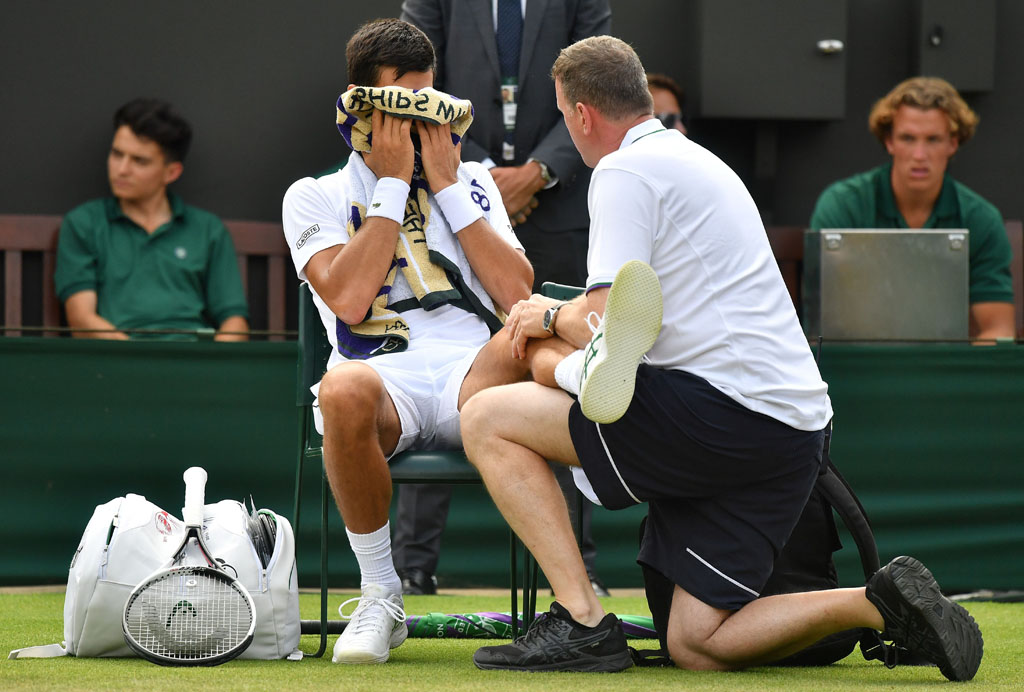 “Hopefully it’s nothing that will concern me, so to say, that I’ll be able to perform.”

If Djokovic is fit to play in a game that is certain to be played on Centre Court, he expects a tough battle against an opponent who has already beaten him this year, as he heaped praise on Edmund’s coach Freddie Rosengren.

“Ever since he started working with a new coach that I’ve known for years, because he worked with Mario Ancic and Soderling, he’s known as a very good coach, has that professionalism, discipline,” he stated.

“I think Kyle and him are a great fit. Kyle is very devoted. He has very good ethics, a hard worker, puts in the hours necessary on the court and in the gym to get himself to best possible shape.

“You can see the results are showing that their work is very beneficial for Kyle. He’s top-20 player of the world. He’s going towards the top 10. He won against me this year in Madrid. He won against Dimitrov. Reached semis of Australian Open. I mean, he certainly has the capacity and the quality to compete at the highest level.

“Probably that match is going to be one of the two big courts. He’s a hometown favourite now that Murray is not here. There’s a lot of expectations and pressure on his back. But he’s handling it pretty well so far.”