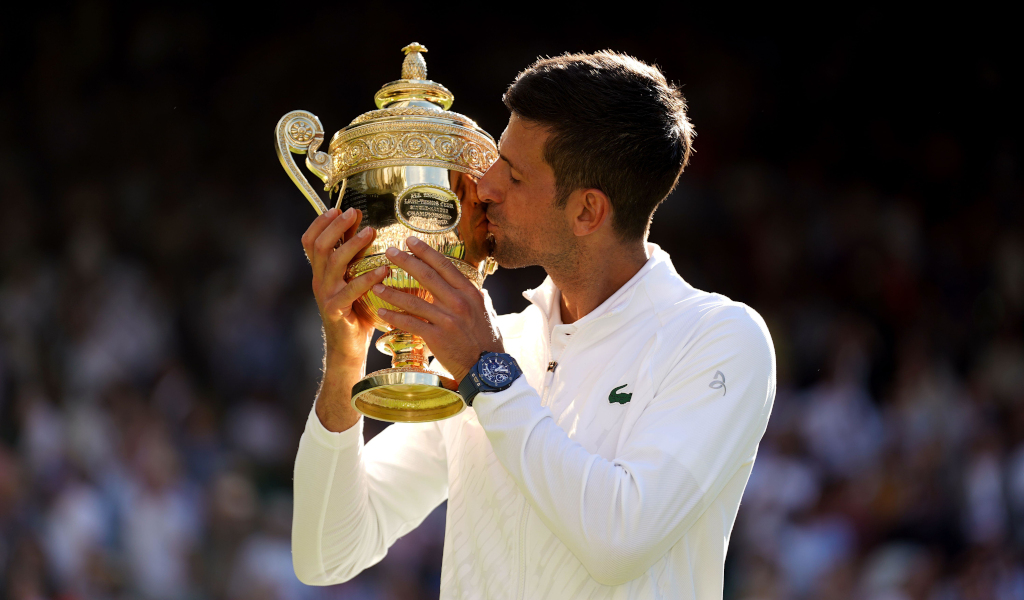 Novak Djokovic kept his composure amongst the Nick Kyrgios chaos as he beat the Australian to win a seventh Wimbledon crown and a 21st Grand Slam title.

The talk before the showpiece match on Centre Court was mostly about whether or not both players would keep their cool on Sunday and whether or not we would have some heated verbal exchanges between the finalists.

Stepping onto Centre Court for his maiden Grand Slam final was always going to be a special moment for Kyrgios while for Djokovic it was his 32nd time playing in the showpiece match of a major.

The time is NOW @DjokerNole & @NickKyrgios step out onto Centre Court for the 2022 #Wimbledon final!@Wimbledon pic.twitter.com/vDMPsasL02

It was high-quality match during the early stages with several exquisite shots and there was no sign of nerves from Kyrgios as he produced some confident games – even sending down an underarm serve in his opening service game.

The first four games went according to serve before the Australian produced a brilliant return game to get to 15-40. Djokovic saved the first break point, but a double fault on the second gave Kyrgios the break and he held his next three service games to take the first set in 30 minutes.

But Djokovic has been through so many ups and downs in Grand Slam finals that he was never going to get hot under the collar and within a blink of an eye he found himself 3-1 up as he broke to love with Kyrgios getting frustrated with his box and muttering to himself.

Djokovic had to work to hold serve and take the set as Kyrgios threw the kitchen sink at him, opening a 0-40 lead with some incredible touches before the masterful Djokovic wore him down yet again.

The Kyrgios antics came out in the third set as he was upset with a spectator disturbing him during a service game. He had a long chat with the chair umpire after edging 3-2 ahead, asking for officials to remove the “drunk” woman who has had about “700 drinks”.

Kyrgios complaining about a specific spectator.

“She’s drunk out of her mind in the first row, talking to me in the middle of the game… The one with the dress, the one who looks like she’s had about 700 drinks, bro!”

That’s no way to talk about the Duchess of Cambridge, Nick.

And that really set Kyrgios off as he became edgier and edgier and his emotions boiled over in the ninth game as he went from 40-0 to dropping serve. Most of his anger was directed at his box and he even gave them a thumbs up after being broken.

Djokovic was unperturbed by what went on across the net as he kept plugging away and served it out to go two sets to one up.

Kyrgios managed to regain his composure slightly, although he kept chirping away to anyone who would listen, and it became more and more difficult to hold serve with Djokovic now winning several points off his big weapon.

Yet, it went according to serve and Djokovic was under pressure to stay in the set at 5-6, but delivered another composed game to take it to the tie-breaker.

Kyrgios produced an error-filled tie-breaker and Djokovic capitised to win after just over three hours, slumping to the ground to do a swallow dive in celebration.

His fourth Wimbledon title in a row saw him move to 21st Grand Slams and he is now just one behind leader Rafael Nadal and one clear of Roger Federer.