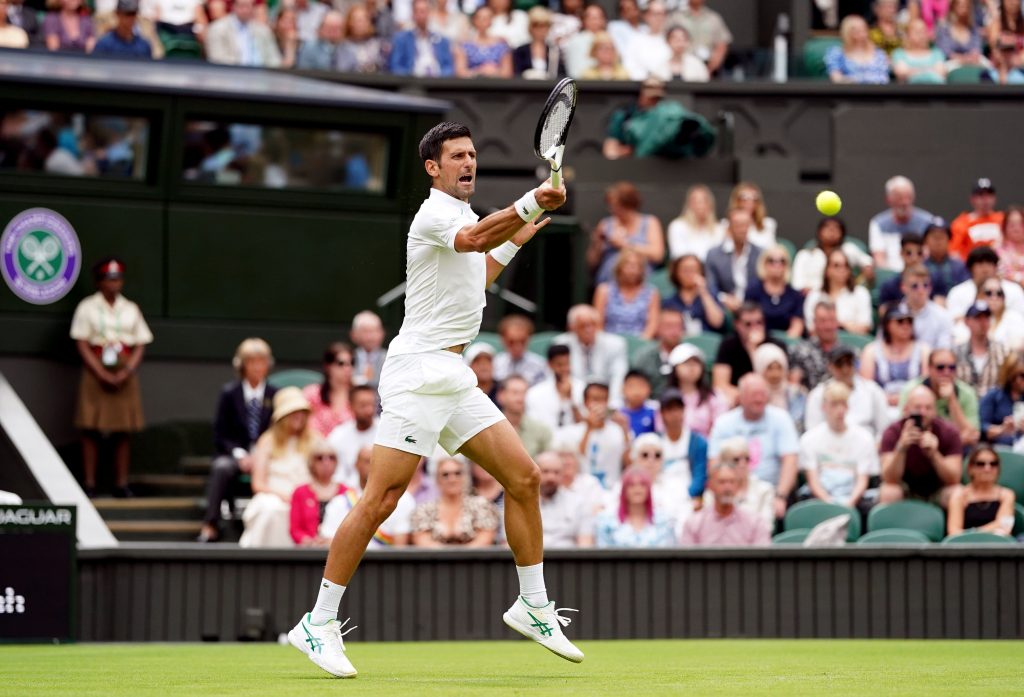 Novak Djokovic had to battle back from two sets down to reach the Wimbledon semi-final and preserve his remarkable Centre Court record.

The defending champion, bidding for a fourth consecutive title, looked on the brink of a sensational defeat when Italian youngster Jannik Sinner led 2-0.

Amazingly, it means Djokovic has still not lost a match on Centre Court in nine years – since Andy Murray beat him in the 2013 final.

His only two defeats since, to Sam Querrey in 2016 and a retirement against Tomas Berdych a year later, came on Court One.

But he needed the patience of a saint to beat world number 13 Sinner, a talented 20-year-old with a huge future in the game.

There was no hint of the drama to come when Djokovic raced into a 3-0 lead but a sloppy service game with two double faults, including one on break point, allowed Sinner – who had never won a tour-level match on grass before these Championships – to draw level.

The Serbian saved a break point in his next service game but Sinner struck again for 6-5 with a whipped forehand winner and served out the opening set.

As Djokovic floated a backhand long Sinner took the second set having won 100 per cent of the points behind his fizzing first serve.

But just as he looked on the cusp of unravelling, the top seed rediscovered his range and hit back in the third.

Sinner did not require a medical time-out but he needed to shorten the points – however when an ambitious drop shot floated into the net Djokovic had the break in the decider and the 10th seed’s race was run.

A relieved Djokovic said: “Huge congratulations for a big fight for Jannik, there’s going to be a lot of opportunities for him on the big stage.

“He was the better player for the first two sets, but I had a toilet break and a pep talk in the mirror – it’s true – sometimes these things are necessary. The toilet break was the turning point

“I go through the same doubtful moments as anyone else. The inner fight is the biggest fight you go through. I always believed I could turn the match around, I’ve done it a few times in grand slams. I’m just glad I’m through.

“This court has inspired me, every time I step on it the love affair keeps going and hopefully I can maintain that run.”