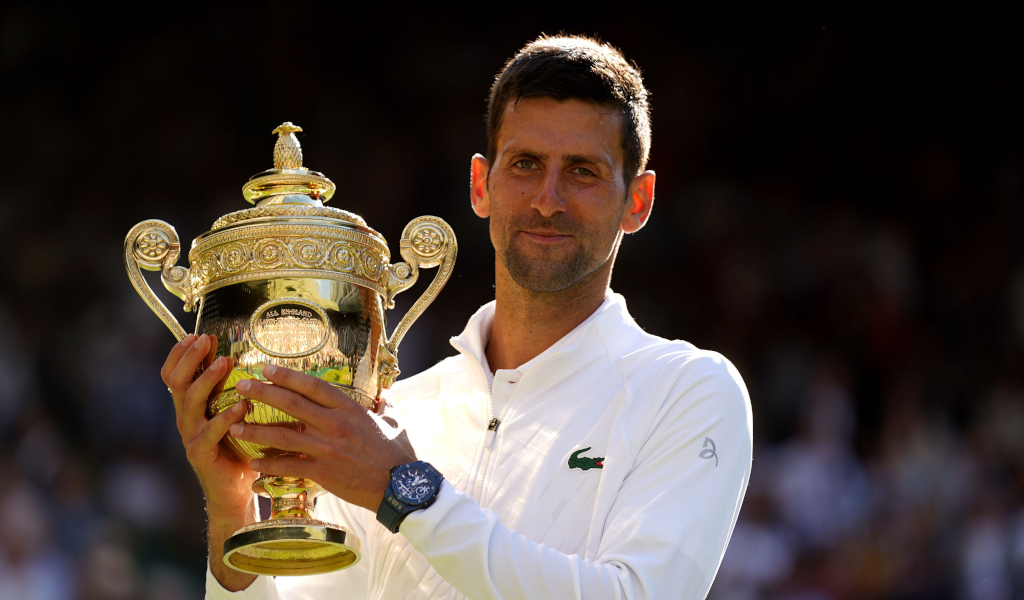 Novak Djokovic considered himself “blessed” to win another Wimbledon trophy as his seventh title at the All England Club Tennis Club saw him move to 21 Grand Slams trophies.

The cool, calm and collected Djokovic defeated first-time finalist Nick Kyrgios 4-6, 6-3, 6-4, 7-6 (7-3) on Sunday to win a fourth consecutive title at SW19 and he is now just one behind the men’s record of eight, which is held by Roger Federer.

He also moved to 21 Grand Slam titles – one adrift of Rafael Nadal – but the Wimbledon trophy will always be the special one for Djokovic.

“I am lost words for what this tournament and this trophy means to me,” he said during the post-match presentation. “It always has been and will be the most special one in my heart. It motivated me to play in my small mountain resort and I saw Pete Sampras win and I asked my mum and dad to buy me a racket.

“It was my first image of tennis – every single time it gets more meaningful and I’m blessed to be standing here with the trophy.

“It is the most special tennis court in the world and when you walk on the untouched grass and everything is so directed on the tennis, the players’ ball and racket and it has the most recognition in the world.”

Kyrgios had declared in the build-up to the final that his relationship with Djokovic is now a “bromance” as they have been sending each other DMs on social media.

It is in stark contrast to the frosty relationship they have had in the past with Kyrgios at one point saying “I can’t stand him”.

But they have declared a truce with Djokovic confirming their “bromance”.

“It is tough to find consolation words at a moment like this but you showed why you are one of the best players in the world,” he said.

“I wish you all the best. I respect you a lot and you are a phenomenal talent.

“I never thought I would say so many nice things about you, considering the relationship! Okay, it’s official: it is a bromance.”

He added: “Nick, you’ll be back. Not just in Wimbledon but in many finals.”

The finalists also joked on social media that they would go out for dinner after Sunday’s final with the loser having to foot the bill and Djokovic joked “that’s why Kyrgios lost the final”.