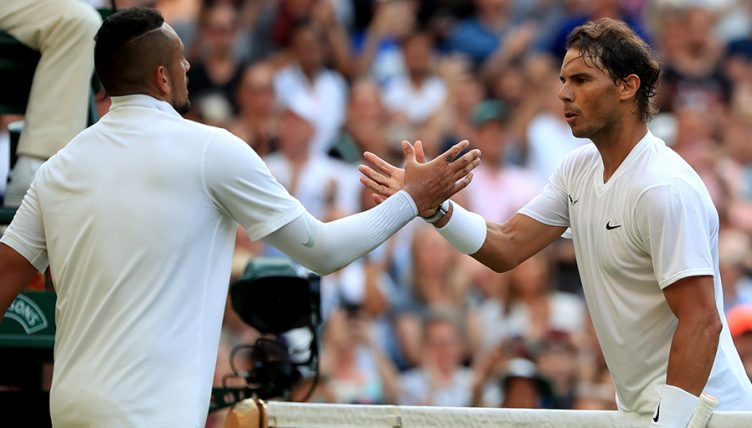 Rafael Nadal has taken a fresh swipe at Nick Kyrgios after the Australian deliberately hit a ball at his body during their match at Wimbledon.

The pair played out a brilliant three-hour classic on Centre Court on Thursday which Nadal won to progress into the third round.

However, as brilliant as the tennis was throughout, it was the clear animosity between the two men that added the drama.

That included one point that Kyrgios won by smashing the ball directly at Nadal’s body at the net.

Kyrgios later admitted it was done on purpose, saying he was trying to ‘hit him square in the chest.’ and that has understandably not gone down very well with Nadal.

“Honestly, is not about what I feel or what I don’t feel,” the Spaniard told reporters.

“Honestly it is about we are in a game that the history of this sport is about respect and is about playing fair during the whole time.

“I don’t say Nick does this stuff to bother the opponent, but is true that sometimes he’s dangerous. When he hit the ball like this, is dangerous.

“I know he’s a big talented player, but I am a professional player, too. I know when you hit this kind of ball, the ball can go anywhere.

“This time the ball went in, almost hit me, no problem. I am professional, so I know how to avoid this.

“But another one, the ball goes straight to the back. So have been dangerous moment for the line umpire. That ball hits an eye or something like this, is a problem.

“That’s it. ‘Is not about I am angry about him at all. It’s about I want to play a match of tennis. Sometimes is difficult.”