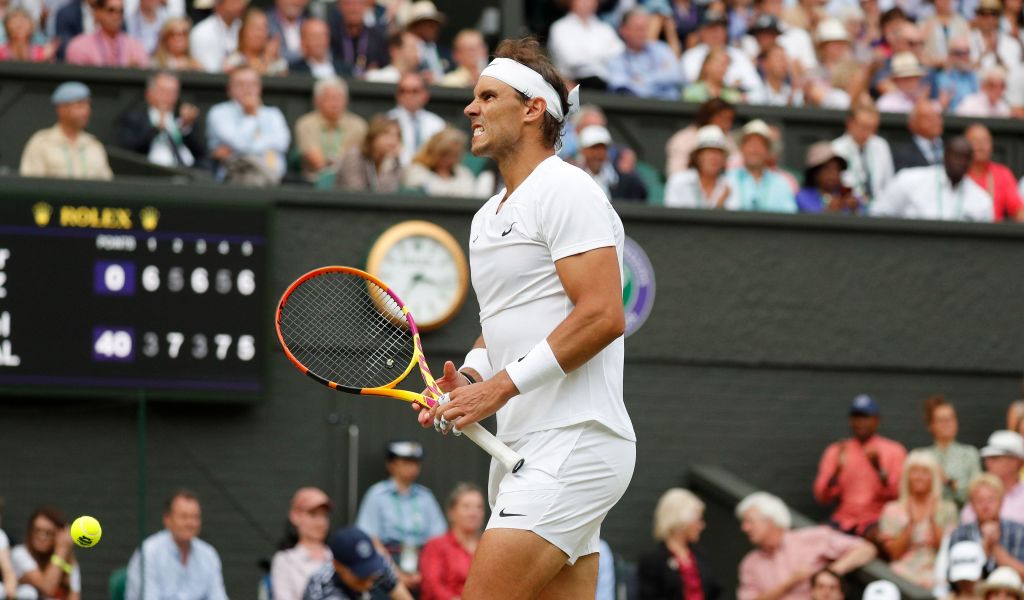 Rafael Nadal has revealed his family were calling for him to quit in his Wimbledon quarter-final against Taylor Fritz, but he ignored their advice to continue in the match and pull off a remarkable five-set win.

The 22-time major champion revealed his injury is in his abdomen area, as he gave his views in a very honest and open press conference.

When asked what his family were telling him to do as he appeared close to walking away from the match, Nadal offered uo this honest confession.

“They told me I need to retire the match,” said Nadal. “Well, I tried. For me was tough to retire in the middle of the match. Not easy even if I had that idea for such a long time.

“But in the other hand, I did it a couple of times in my tennis career. Is something that I hate to do it. So I just keep trying, and that’s it.

“I’m playing great.  I am enjoying a lot. The level of tennis, if we put away the problems, something that’s difficult, the level of tennis, the feeling that I am having with the ball in my hand is honestly great. I am feeling myself playing very well.

“Now I’m worried honestly. That’s part of the business, too. Even if I did a lot of efforts to play this event in all ways, abdominal is not a thing that comes to play on grass. Can happen in any surface.”

Nadal is now due to play Kyrgios in the semi-finals on Friday, but he admitted he has big doubts over whether he will be fit to play in that match.

“Tomorrow I going to have some more tests, but difficult to know (whether he will play on Friday,” added Nadal.

“It’s obvious that I am not the kind of player that I didn’t have a lot of things in my tennis career, so I am used to have things and I am used to hold pain and to play with problems. Knowing that, when I feel something like I felt, that is because something is not going the proper way in abdominal, no?

“Let’s see. It’s obvious that today is nothing new. I had these feelings for a couple of days. Without a doubt, today was the worst day. Have been an important increase of pain and limitation. And that’s it, yeah.

“I managed to win that match. Let’s see what’s going on tomorrow.

“The decision if I play at the end – all the decisions – are the player decision, but at the same time I need to know different opinions and I need to check everything the proper way.

“That is even something more important than win Wimbledon, that is the health. Let’s see how this is going tomorrow.”

Nadal is set to have further scans on his abdominal problem and looking at his body language in the press conference, there has to be a strong chance he will not play again at Wimbledon this year.