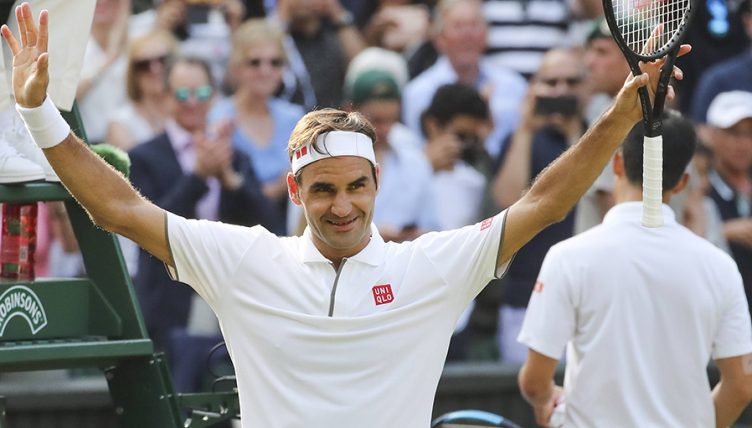 There will be a dream semi-final between Roger Federer and Rafael Nadal this year at Wimbledon after both came through their quarters on Wednesday.

The duo, who have had some iconic contests over the years and none more so than at the All-England Club, and we will get another installment of their timeless rivalry on Friday.

Federer had the tougher test in the last eight, and dropped the first set to Kei Nishikori before coming roaring back strongly to win 4-6, 6-1, 6-4, 6-4.

“It was very difficult,” Federer admitted.

“It was a brutal beginning, Kei came out smashing winners, I just tried to stay with him and tried to turn it around in the first set. But Kei was the better player.

“I was able to start a normal match at one set all and then I protected my serve really well until the end. I played a good service game against a good return player.”

It’s Federer vs Nadal. At #Wimbledon

Rafael Nadal later ensured we’d have the Wimbledon semi-final we all wanted from the moment the draw was made, by beating Sam Querrey 7-5, 6-2, 6-2.

“Quick or not quick, I am happy to be in semi-final after a match against a very good opponent,” Nadal said after the match.

“I am very happy with way I played it. It was dangerous on serve in the first set but then I played great, the serve started to work better and better and, yeah, very pleased.”

And what about facing Roger Federer in the semi-final? “It’s great, difficult to imagine to be again in that situation but here we are, Nadl added.

“I am excited about the victory for today, but excited to play Roger again at Wimbledon after such a long time.”

That excitement was certainly shared by Federer, who added: “We have a lot of information on Rafa, as does he on us.

“So you can dive in to the tactics like mad for two days or you say it’s grass court tennis so I’m going to come out and play my tennis.

“People always hype it up. It was a joy to play against Rafa on his court at the French Open.”