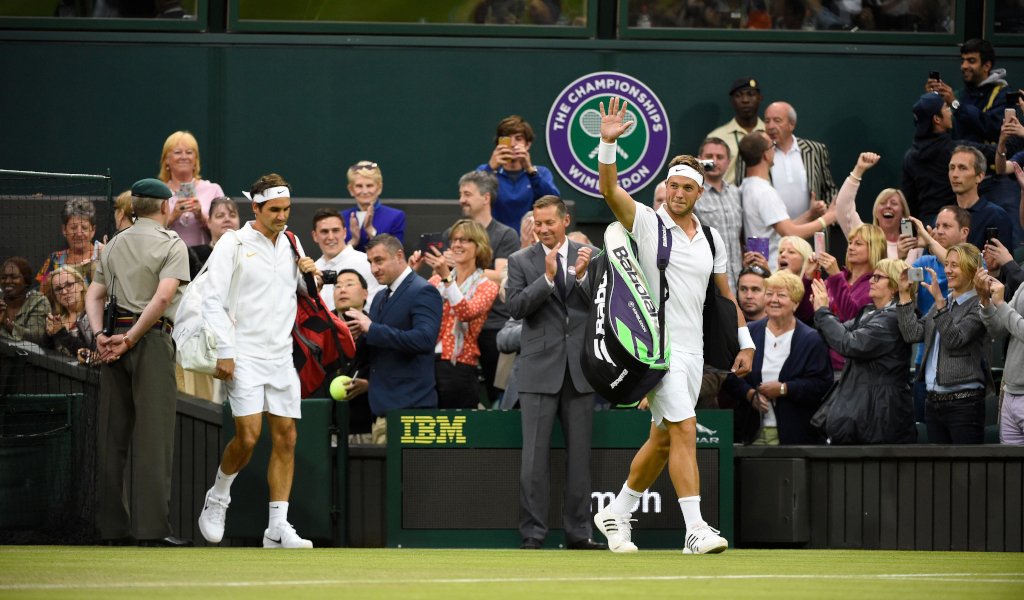 It was almost a given that Tim Henman and Andy Murray would reach the business end of the second week at Wimbledon in their prime. Sometimes, less fancied Brits have risen to the occasion in front of the home crowd too…

In 2016, the Slough-born Englishman was No 772 as Wimbledon approached. He was considering retirement until girlfriend Jennifer Bate insisted he give things one more go in time for SW19. Willis battled through six matches of the qualifiers including wins against Daniil Medvedev and Andrey Rublev to make it to the first round of the main draw where he took down Ricardas Berankis.

Willis’s second-round match was on Centre against the seven-time Wimbledon champion Roger Federer. It went to form without any hiccups for the Swiss. He lost in straight sets but did have his moments. Which he milked. Good on him.

When he was two sets down, the 11,000 crowd were probably looking to shuffle to the underground. However, Britain’s No 6 came to life, flashing winners past the champion in an inspired third and fourth set before Sampras cleared his head enough to come through 6-3 in the fifth. “I had him on the ropes,” boasted Barry. You did. Got to knock him out though, eh?

Has there ever been anyone as frustratingly talented as Heather Watson? Twelve months ago, she was on the brink of beating Iga Swiatek at Eastbourne before letting a big lead slip. It has always been those clutch moments that have tripped up the 30-year-old. It could have been so different.

In 2015, Watson was a woman possessed in the third round and her defeat against Serena Williams on Centre Court was entirely blameless. The Guardian reported that Watson “reduced Williams to a shaking wreck, near tears and screaming in exasperation”. That’s how good she was that day. The Guernsey-born player even managed to storm into a 3-0 lead in the third set before full metal jacket Serena powered to the finish line to nick it 7-5. She did win the mixed-doubles in 2016 with Henri Kontinen.

Well, she’s done the old Ash Barty trick of retiring early although her hand was forced by a persistent knee injury. Konta’s best nearly moment was at Wimbledon 2017 when she reached the semi-finals.

By defeating Simona Halep in the quarters, the former world No 4 became the first British woman to reach the last four since Virginia Wade in 1978. A win against a 37-year-old Venus was not out of the question but Konta was never a great worker of the crowd and her tournament fizzled out in a deeply disappointing 6-4, 6-2 defeat.

Before he started commentating like a lightweight entertainer on the BBC, Castle used to be a British tennis hope back in the 80s at a time there was essentially no hope at all. John Lloyd had just retired and the 22-year-old was ranked 285 when he took on Sweden’s second seed Mats Wilander.

Castle landed 12 aces past Wilander and “punched volley winners with the aplomb of John McEnroe” according to the New York Times. It wasn’t enough and Castle tired in the fifth just as a young Andy Murray had to against David Nalbandian when the Scot was probably still on a diet of pizzas.

2018 was the year of the Ed. Great Britain thought they had the man to take over the reins from the metal hip world-weariness of Andy Murray who had pulled out on the eve of the tournament.

The big-serving Londoner had reached the world’s top 20 when he took on Novak Djokovic in the third round on Centre Court. The crowd were ready to put their weight behind him, especially most were in full nationalistic mode with England playing Sweden in the World Cup.

Edmund took the first set 6-4 and started the second aggressively as Djokovic became visibly irritated. It didn’t last but the signs were that Edmund would be around for a while. He’s now slipped to a ranking just below 300 with chronic knee problems.

Another great hope that was hit by persistent injury forcing early retirement earlier this year at the grand old age of 28, Robson reached a career-high ranking of 27 in 2013. This included an excellent SW19 campaign where she beat the No 10 seed Maria Kirilenko and had a winnable match in the fourth round against Kaia Kanepi. She had a 5-2 lead in the first tiebreak but lost the set and then another closely fought second 7-5.

“I’m really, really disappointed. I had my chances and I didn’t take them,” said Robson. She looked gutted as she sloped off the court without looking up at the crowd. A quarter-final date was there for her.

Norrie is a proper player, seeded ninth at this year’s, ahem “exhibition”, but he’s only had one memorable moment at Wimbledon in a career that has essentially never really caught the public’s imagination. In 2021, the Englishman made it to the third round against a rusty 39-year-old Federer. Norrie took the third set but never threatened the win and was disappointed not to find his A-game to test the loyalties of a primetime Saturday home crowd.

Dan the Man has been around the Wimbledon circuit for a good while now without ever really disturbing the scorers. Last year was the chance to stamp his authority on the tournament as a rusty Andy Murray failed to reach the second week.

Evans started brilliantly, defeating Feliciano Lopez and Dusan Lajovic in straight sets to secure a Friday date with America’s next big hope, Sebastian Korda. He lost in four and rather dribbled away after drawing level. Evans admitted: “It was a good chance to have a decent run. I think I didn’t turn up really. It’s difficult.”

The 20-year-old has just been denied his first ATP Tour final at Eastbourne. There’s potentially plenty more to come from the British number four who recently cracked a top 100 ranking earlier in the month.

Last year, he was first on court at the Championships, taking on defending champion Djokovic. To the delight of the crowd, Draper seemed to lap it up and even had the cheek to take the first set before normal service was resumed.