Who is most likely to take a 2019 men’s Grand Slam from Djokovic, Nadal, and Federer? 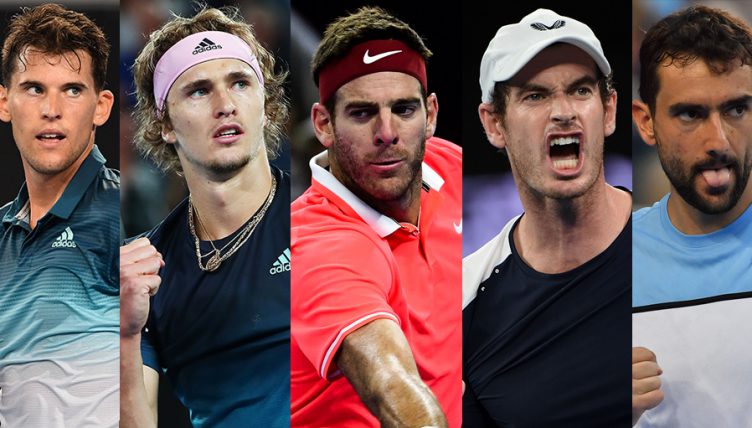 We all know who are most likely to win one of the three remaining men’s Grand Slam titles in 2019, but if it’s not Novak Djokovic, Rafael Nadal, or Roger Federer, then who do the bookies think it is most likely to be?

Thiem has struggled of late, finishing 2018 in patchy form and struggling with illness in 2019, but there is a very good reason he is on this list – his clay game.

The Austrian is widely regarded as one of the premier players in the world on the red dirt, and reached his only Grand Slam final at last year’s French Open.

Roland Garros is notoriously tough to win, with the highly specialist nature of the clay surface besting some of the greatest names tennis has ever seen. Pete Sampras, for example, never conquered the French Open, and Roger Federer has only managed it once.

Rafael Nadal will obviously be the player to beat again this year, even with Novak Djokovic’s imperious form.

However, if the stars align, Thiem is certainly a player who could win it.

Zverev is a tough player to judge every time a Grand Slam rolls around.

He is a player who should always be challenging. He is number three in the world and the reigning ATP Tour champion. He has every tool a top tennis player would dream of possessing.

And yet, he has notoriously failed to progress pass the quarter-finals of any Grand Slam before, and he has only reached that last eight stage once.

With some bookies he is as little as 3/1 to win any one Grand Slam title in 2019, which illustrates his quality, and is 11/1 across the board in the individual tournament markets.

Is he going to fly though before he has learned to run at Grand Slam level? It feels unlikely for 2019.

Delpo’s body is quite clearly broken, but somehow he just keeps on coming back!

In 2018 he managed a Grand Slam quarter-final, a semi-final, and a final, so he is clearly still a man who relishes the big occasion.

Perhaps there is an element that the five-set format allows more time for his broken body to warm and loosen, but it’s hard to put your finger on it.

However, he is on this list mainly for two reasons: He loves the US Open and the US Open loves him.

The giant Argentine always seems to raise his game at Flushing Meadows and that is reflected in the markets. He is 12/1 to win the US but 16/1 to win Wimbledon and a massive 28/1 to take the French Ope title.

Does Delpo have one last colossal Grand Slam story left in him? I think most would love to think he does.

At the time of writing, Andy Murray is recovering from major hip surgery and only really planning on playing one more tournament – ever.

The results of the surgery may change his plans, but it’s far from certain he’ll ever play tennis professionally again at this point never mind play it to a level required to cope with an arduous two-week slog of best-of-five matches.

He is, however, 11/1 to win Wimbledon, but that just looks like the markets trying to capture to romantic punt.

He is also as little as 12/1 to win the US Open, which seems even more fanciful at the moment, although you could argue at least he’d have more time to recover his fitness by then if indeed he’s even going to come back at all.

Either way, it would take an optimist of extreme power to realistically expect Murray to challenge for any major titles for a while.

Cilic is not in the greatest form and hasn’t really felt like a force in tennis since reaching the 2018 Australian Open final.

However, the bookies seem to think his game is very well-suited to grass, which makes him a relative realistic contender for Wimbledon.

He’s priced at 11/1 to win at SW19, and it is somewhere where he has reached the final before.

He is 28/1 to win the French, though, and 20/1 to win the US Open so, like Thiem, it’s a specialist game that the bookies appear to have faith in rather than the player himself.