‘Where is Peng Shuai?’ t-shirts see activists ‘harassed’ by security 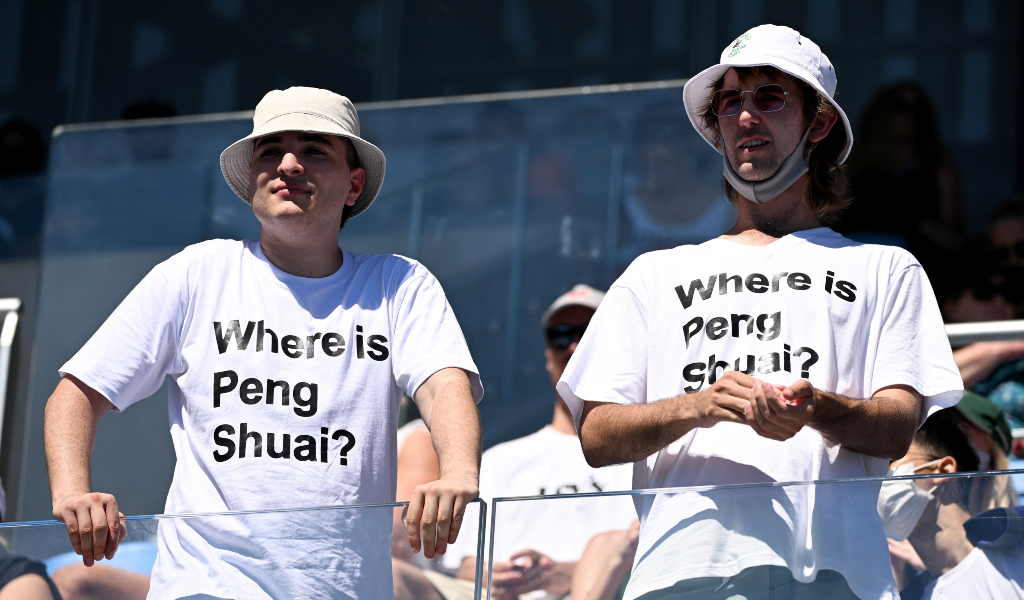 Campaigners wearing “Where is Peng Shuai?” t-shirts at Wimbledon said they have been confronted by “suspicious” Wimbledon security staff.

The group of men said they arrived at the championships on Monday morning via the Queue but did not change into their t-shirts until they were inside the grounds.

They said they had come to Wimbledon to “raise a bit of awareness” after the conversation around the Chinese tennis player had “died down”.

She later appeared on state media but observers said the appearances seemed to be staged in response to foreign pressure.

Will Hoyles, 39, one of the campaigners who works for the Free Tibet campaign, said they were quickly confronted by “suspicious” security staff as they walked around the Wimbledon grounds on Monday.

Speaking to the PA news agency, he said: “We came trying to raise a bit of awareness but Wimbledon have managed to make it worse for themselves by harassing us.”

Mr Hoyles added: “They were asking loads of questions about what we were going to do, why we were here, you know, what we’d already done etc.

“And we told them we’d just been wandering around and we’d spoken to a few people and that’s when they seemed to get quite suspicious.”

He added that the staff told them they “should not approach anyone to talk to them”.

“They said repeatedly the club doesn’t like to be political,” he said.

“We said to them we don’t believe the message is political because we are simply asking where a tennis player is, where a Wimbledon champion is.

“We think that’s a fairly easy thing to ask and I think given the support we’ve had from people around the grounds I think lots of people are asking the same question so I don’t think it’s a political message.”

Mr Hoyles said the security staff disagreed and asked if they were planning anything else before searching their bags for any flags or banners.

Jason Leith, 34, also from the Free Tibet campaign, said they took issue with the club saying they were “not political”.

He said: “We are banning Russian players and Belarusian players who have spoken out against the war but then there’s all these human rights abuses that the Chinese Communist Party have carried out but that’s absolutely fine – so it’s a double standard. It just doesn’t seem to make sense.”

The 34-year-old said they had come to Wimbledon because the noise around Peng Shuai has “kind of died down”.

“It’s Wimbledon and she’s an ex-Wimbledon champion and if there’s anywhere to go and talk about this and to get that discussion brought back up again it’s going to be here,” he added.

“We’re not protesting Wimbledon, maybe we think they should be a bit more vocal in support of the situation but we’re not here to stop anyone playing or stop anyone enjoying their time here.”

“We’re expressing our support and showing solidarity,” said Caleb Compton, 27, who is also from the Free Tibet campaign.

Mr Hoyles said they also wanted to raise awareness for the “wider issue of the engagement of sports with China”.

“The Chinese government is treated widely as just another normal government around the [world] but it’s genocide and dictatorship and for major sporting events and major sporting organisations to treat it like it’s just like any other country because of the money there is appalling and that’s something we wanted to draw attention to,” he said.

Mr Hoyles added that they were “really disappointed” but not surprised security staff approached them.

He said: “I mean you would hope that an institution like Wimbledon would give us power to speak out in support of one of its champions but not surprised.”

The group said they had come with a fourth member, a man called Alvin, who did not want to share his second name, from the group Power To HongKongers, but he had already left the grounds.

Responding to footage of the group talking to security staff on Twitter, Conservative MP Iain Duncan Smith tweeted: “Dear @Wimbledon, unlike in Xi’s China, we value free speech in this country.

“People wishing to raise their voices in support of #whereisPengShuai should be allowed to do so.”

An All England Club spokesperson said: “We can confirm that four guests were approached today by security whilst walking outside No.1 Court.

“These individuals are now enjoying their day with us and continue to be able to wear their t-shirts.

“Like much of the tennis community and people around the world more broadly, we remain very concerned for Peng Shuai and we continue to support the WTA’s efforts.”