Which Wimbledon court produces most upsets? Which court has most one-sided games? 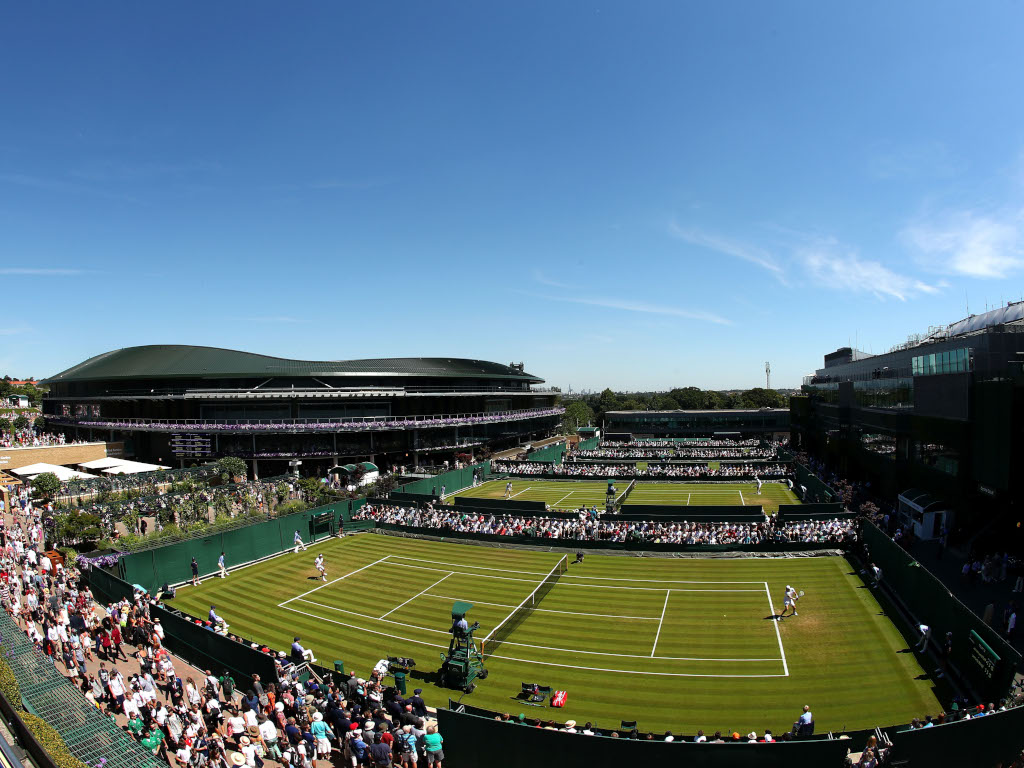 Have you ever wondered which Wimbledon court produces the most entertaining matches? Or which court involves countless nail-biting tie-breaks?

Well, bookmaker bwin analysed every match played at Wimbledon in 2017 and they found some interesting stats.

Outside Courts:
Get the most for your money at Court 6
Court 6 has the highest-average sets per match (3.3), which also results in the highest average games per match (32.2)

Watch the elite off Centre Court
With 87% of games played on Court 12 including a seeded player, no other outside court can boast the same high calibre

Wimbledon’s big upsets
Court 3 sees the most upsets, with one in for four (8/32) games having a seeded player knocked out by a non-seeded player

Two-on-Two
Three quarters (74%) of games played on Court 7 are doubles matches, which is higher than any other court 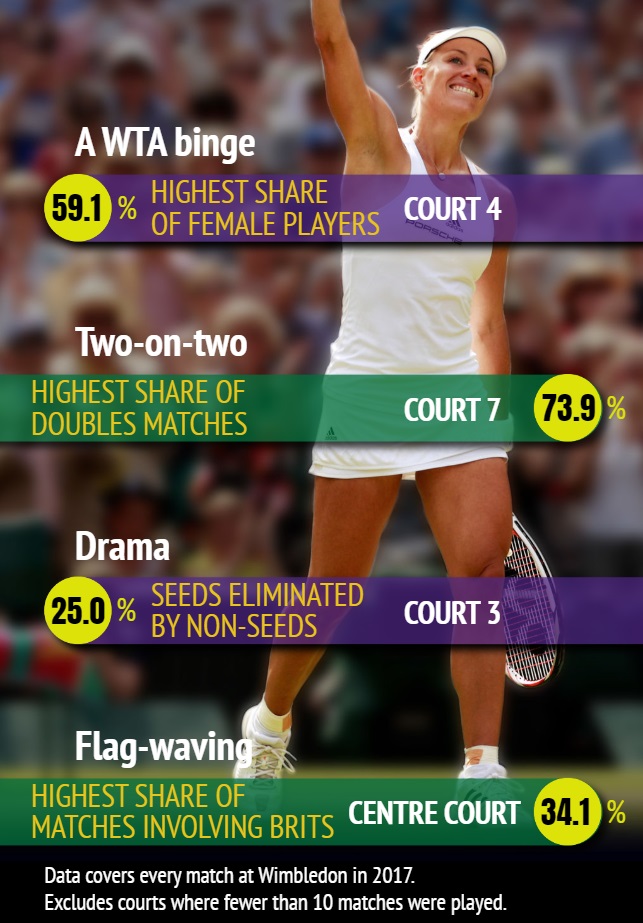 Player Dominance and Competition
Player demolisions on Court 9
With 61% (277/453) of games won by the match-winner, Court 9 players show the most dominance on winning games

One-sided games
Court 9 also sees the most straight set wins, with 69% (11/16) of games ending with the defeated player not even winning a consolation set.

Nervous endings
Court 6 sees 23% (13/56) of sets won by the defeated match player, which is the highest on any court 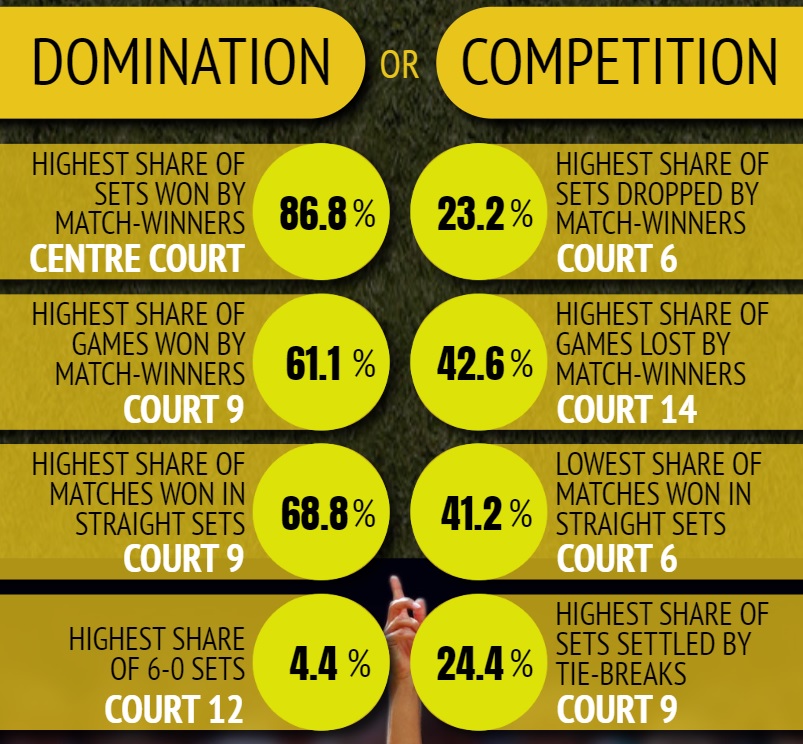 Too tough to call
41% (7/17) of games played on Court 6 are not won in straight sets, showing the most evenly matched opponents

Show Courts:
Centre Court not always for the stars
Whilst Centre Court is seemingly reserved for the elite players, 2.4% of games still consist of non-seeded players

Centre Court patriotism
Flag Waving Brits should head to Centre Court, as 31% of Brits matches are played on the main stage

Centre Court dominance
87% (99 of 114) of sets won on Centre Court are from the match winner, with no other court showing a higher Set dominance

Centre Court hosts most matches
Centre Court offers the most action, with 41 matches played on the court 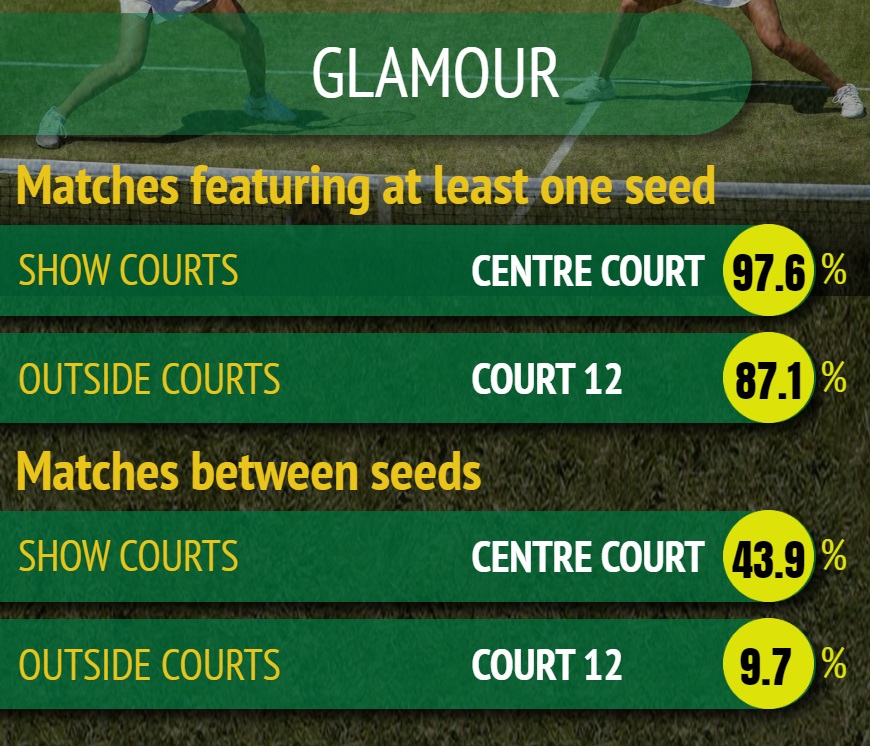