How to watch the final day of Wimbledon qualifying 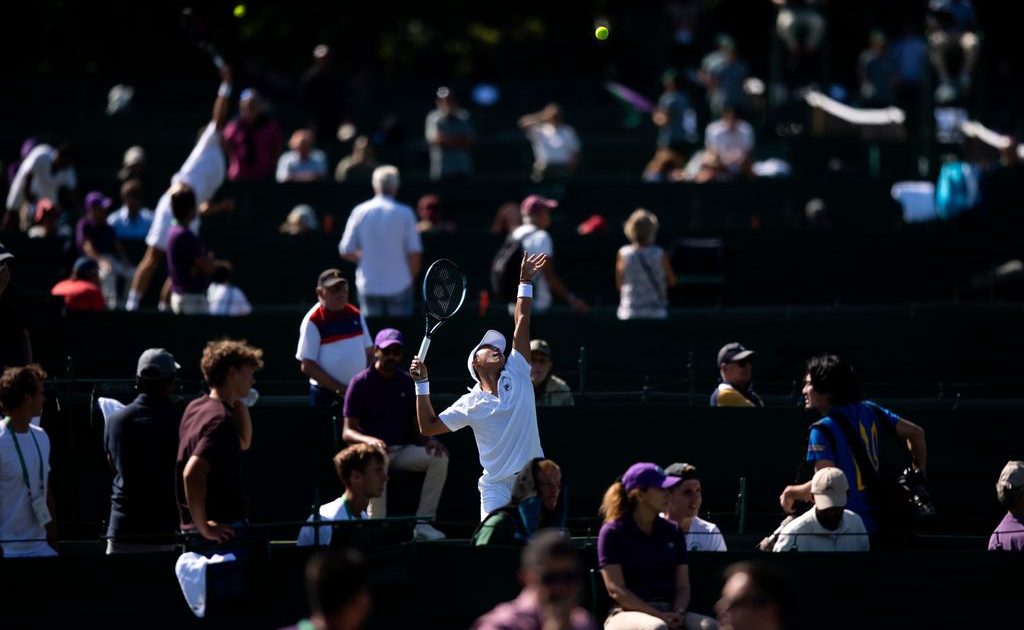 While the All England Club remains quiet for a few more days, down the road at the Wimbledon Qualifying and Community Sports Centre there is plenty of noise.

By close of play on Thursday, 16 men and 16 women will have won three qualifying matches to seal their place in the main draw at Wimbledon, overcoming the physical and mental challenge of battling for a place in the sport’s oldest tournament.

Stepping into the site in Roehampton, you don’t feel as if you are stepping into a qualifying event. This is a tournament in its own right and a mammoth event at that.

It is also a golden opportunity for British players, with five British men and an equal number of female players given the opportunity to challenge for a chance to play on the biggest stage in tennis, courtesy of wildcards awarded by the LTA.

Fans are flocking to temporary stands and grass embankments in one of the hottest weeks of the year, watching a total of 256 players vying for those precious qualifying spots.

The event is bigger than ever with larger stands around the courts and even new food stalls; fans can treat themselves to Lebanese wraps, calamari and toasties, alongside traditional Wimbledon staples such as Pimms and strawberries and cream.

Amid the energy off court, on court there’s a melting pot of generations, youth and experience all playing with the same goal.

At one end of the spectrum, you have 17-year-old Luca Pow, a Brit playing in Grand Slam qualifying for the first time, making his tentative first steps in the senior game.

Pow is one of many promising players emerging from the LTA’s National Academy set-up at Loughborough, led by lead coach Nick Cavaday and his team of who provide a professional training environment for players aged between 13 and 18, giving them the best chance to move onto the LTA’s Pro Scholarship Programme and push into the top 100 of the world rankings.

That ambition is still some way in the distance for Pow, who lost 6-1 6-4 to 27th seed Mitchell Krueger in the opening round, but his wildcard presented him with the first opportunity to play in front of a significant crowd.

He said: “It was my first slam, even qualies. It was weird having a crowd. From juniors you don’t usually have a crowd. It just had a different vibe, it just felt different.

“Usually you play a tournament and you don’t have loads of people supporting you, it’s just your family and your coach, so it is nice. When you win points you get more cheers than your opponent. It definitely feels really good.

“It was just amazing, it was a good experience and I hope to be back here next year.”

"It's been a great and wonderful career"

Following his Qualifying victory, Philipp Kohlschreiber reveals The Championships 2022 will be his final tournament#Wimbledon pic.twitter.com/xdZTUyYVlg

On the flip side, you have the likes of Philipp Kohlschreiber.

The 39-year-old German, having hoped to qualify for a 69th Grand Slam main draw, retired following a second round loss to Mikhail Kukushkin which put an end to his 21-year-career.

In the women’s draw there was 35-year-old Sara Errani, the former world No. 5 still grinding her way on the circuit a decade after reaching the Roland Garros final; the Italian fell in a deciding set tie-break to Mirjam Bjorklund in the opening round.

Elsewhere, CoCo Vandeweghe, a Wimbledon quarter-finalist in 2015 and 2017 and a former Australian and US Open semi-finalist, is the second seed in the women’s draw as she looks to return to the upper echelons of the game.

In contrast, Vandeweghe’s opening round opponent was 16-year-old Brit Ella McDonald, while 14-year-old compatriot Mimi Xu – who could still play Junior Wimbledon in 2026 – also made her qualifying debut.

Vandeweghe and McDonald’s contest was one of the matches of the opening round, the experienced American edging her way over the line 5-7 6-1 7-6 [10-8] in a thrilling contest.

While Vandeweghe continues her Wimbledon journey, for McDonald there was simply encouragement about her competitiveness at this level.

She commented: “I just went into the match wanting to have no regrets, just playing my tennis and playing a great game really. I didn’t expect myself to do that well to be honest.

“She [Vandeweghe] played really well. I just wanted to match her and I thought I did that pretty well considering. I’m really pleased with how the performance went today.”

No matter who is playing, the experience of qualifying provides the perfect start to what is perhaps the pinnacle of the tennis calendar.

There’s a level of drama and high intensity arguably no different from what we’ll see on Centre Court come next Monday.

And with Emma Raducanu winning the US Open and Aslan Karatsev reaching the Australian Open semi-final from qualifying last year, the opportunity to make a mark is there.

Who could potentially find themselves on that stage, against the likes of Novak Djokovic or Iga Swiatek, in less than a week’s time remains to be seen.

You can watch final day of qualifying on the official Wimbledon YouTube channel.