Johnny Nic: Save the infantile booing for pantomime season, not great tennis spectacles 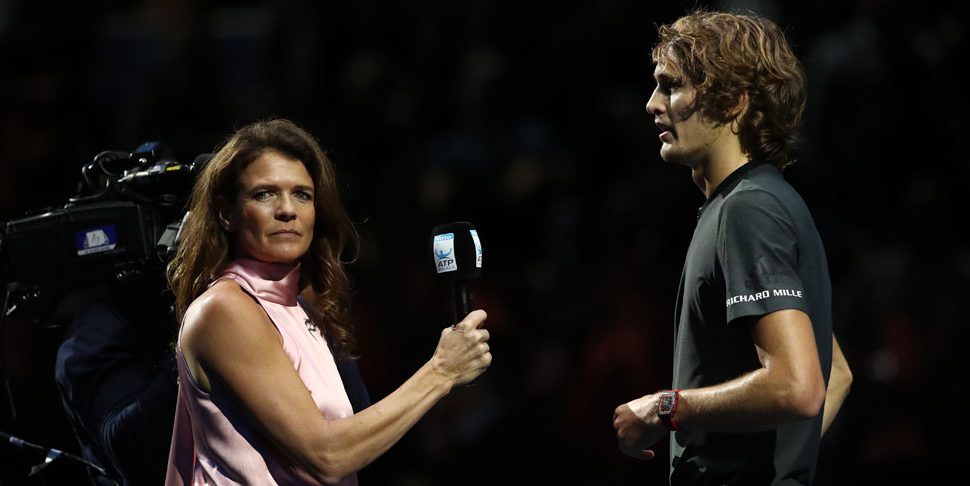 Fans at The O2 booed Alexander Zverev for following the rules this weekend, and that has annoyed John Nicholson.

One of the best sporting spectacles this weekend was seeing Annabel Croft telling off the crowd for booing Alexander Zverev after his victory over Roger Federer at the Nitto ATP Tour Finals. Booing because earlier in the match he had the temerity to stop play mid-rally when a ball boy dropped a ball onto the court.

Her indignation and subsequent admonishment of their behaviour was done in that firm sort of way a disapproving headmistress has when you’ve been caught abusing the school goat again; a tone of disappointment as much as disapproval.

The fact the crowd needed putting in their place at all is indicative of a growing trend in the game to be disruptive and overly critical of one player over another.

I hope the booers felt suitably ashamed of themselves as the 21-year-old German launched into an extended and totally unnecessary apology, even against Croft’s wishes. Federer, as one would expect, was very accepting and gracious, it’s just a pity some of his fans can’t match his gentlemanly attitude.

Incidentally, is there anything worse than hearing a sports man or woman apologising to a crowd?

It’s just sport and even if it was massive injustice, suck it up and stop your moaning. It’s like when footballers go on Twitter and apologise for losing a match.

I see this as all part of the infantilization of society, where it is as though adults need placating like a child in the midst of a tantrum because they lost their toy rabbit.

But this was far from the first time that a tennis crowd has misbehaved in recent years. It seems rooted in two things.

Firstly, a kind of one-eyed tribal loyalty to a particular player that echoes the ‘my club, right or wrong’ mentality of some football fans. Secondly, a more endemic and widespread inability to behave with good manners in public.

Abusing a player in a tennis match seems an especially rude and cowardly thing to do. It often seems to me that the abuser thinks they’re watching TV and are not actually in public and that they’ve forgotten or not learned how to behave outside of their living room.

Such behaviour is bullying, plain and simple because the player can hardly retaliate, climb over the seat and berate the punter for being such a lousy audience member, can they? Though sometimes I’d like to see that happen.

So the abuser knows that they can dish it out with impunity. Zverev wasn’t going to get in their face and give them a hard time. And that’s what is so despicable about the whole thing. It verges on the moronic.

We saw it at Wimbledon in the summer when the crowd sided against Novak Djokovic when playing first Kyle Edmund and then Kevin Anderson. At one point he instructed the umpire to “Tell them to shut the f**k up.” Pity the umpire didn’t express it in such forceful terms really.

It’s one thing to barrack an opposing team player in football, it is quite another to deliberately try to undermine a player on a tennis court. And that’s what is going on. It’s an attempt to put the hated player off their game.

We all tend to favour one player or another and by all means cheer a winning shot, but anything more than that simply isn’t appropriate. And yet we’ve seen this sort of abusive behaviour ever more regularly.

I often wonder if this isn’t because most of the culture and sport we consume we do so passively via the TV sitting on a sofa, inviolate in our own homes where no-one can hear us giving stick to someone. So when actually in public, these people behave in largely the same unselfconscious way.

I think this also explains those people who seem to spend most of a gig filming it on their phone or even more egregious, on their iPad, seemingly oblivious as to how annoying this is for everyone else – or everyone else who isn’t doing the exact same thing.

I look at these people and wonder where the drummed up the entitlement to behave this way from? Same goes for the people who just talk all the way through a gig, as though band isn’t even on stage. What are you doing that for?

When in public you can’t just do what you want, the way you can in your front room. There are these things called manners which have been mutually agreed upon in order for us all to get along with the minimum conflict and annoyance.

It’s time these disruptive people in tennis crowds learned some.