Comment: Novak Djokovic fans should step back from futile popularity battle with Federer and Nadal

If you have been following messages posted on Twitter since his disappointment at the Olympics Games, you could have been forgiven for believing Novak Djokovic suffered a career-ending injury or even worse.

Djokovic’s failure to collect a medal of any colour in Tokyo was a headline-grabbing moment, yet the fall-out from his explosive exit from the tournament and withdrawal from his bronze medal mixed doubles match with Nina Stojanovic sparked comments way beyond the tennis community.

Inevitably, outspoken broadcaster and writer Piers Morgan planted himself firmly in the debate when he suggested Djokovic’s on-court reaction to his defeat against Pablo Carreno Busta – as he threw his racket into the stands and smashed another while targeting his anger at the Olympic Rings attached to the net – was a mark of his petulance.

“Pathetic spoiled brat behaviour by Novak Djokovic at the Olympics today – smashing racquets, ranting & raving, & pulling out of the doubles thus costing his partner a medal,” tweeted Morgan to his 7.9 million followers. “He let his teammates down, his fans down, & his country down. Shameful antics from a supposed champion.”

Morgan was also scathing of Djokovic’s refusal to play his bronze medal match with Stojanovic after citing an injury, with the player who was denied her chance to win an Olympic medal taking time to speak on the issue before giving her views.

“Then and now only I can know the feelings I dealt with once I had found out I will not have the chance to play the most important match of my career for the Olympic medal,” Stojanovic wrote on Instagram.

“I want to say that I am grateful first of all for being there among all the best athletes in the world of sports. And it was an honour and privilege playing with the best in the history of our sport (Djokovic), for your own country.”

They were magnanimous words from a player who has been denied her medal moment, with the manner of Djokovic’s Olympic exit and some of the comments he offered up in Tokyo have left lingering talking points.

Djokovic’s comments that he views pressure in his sport to be a “privilege” saw some media suggest he had made that comment in response to the decision of US gymnast Simone Biles to pull out of Olympic events due to what she cited as mental health reasons.

In fact, Biles withdrew due to her suffering from the ‘twisties’, a mental block that can affect gymnasts and leave them open to serious injury if they continue to compete. 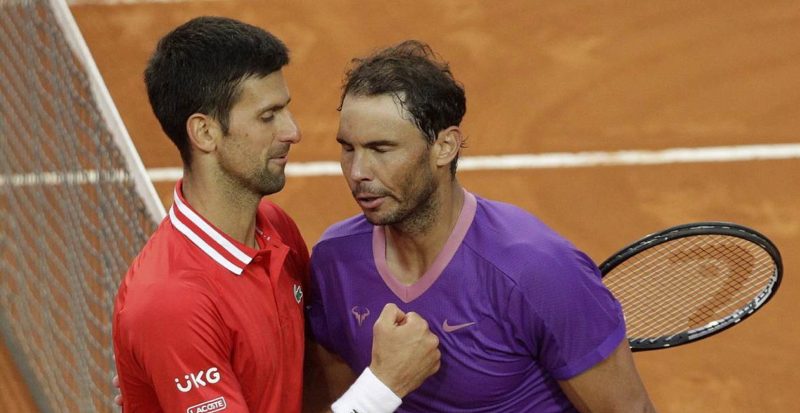 That issue was overlooked by those promoting their own agendas and Djokovic found himself unjustifiably caught up in the debate over Biles, with Novak fans on social media viewed this as evidence that their man was being disrespected by the media and outside sources, as the long-running battle in a pretty pointless popularity contest with his old rivals Roger Federer and Rafael Nadal was reignited.

Nadal’s comments suggesting Djokovic let himself down with his behaviour in Tokyo added spice to the discussion, with these comments quickly attacked by Novak fans.

“It is important to avoid this, especially as a role model for many children,” said Nadal. “He is the number one in the world and one of best in history.

“It’s strange that someone so successful reacts this way from time to time, but he’s very competitive and reacts like that.”

Amid all the tweeted tributes and reminders of the great work Djokovic does for charity, maybe the moment has come for his fans to accept that he may never claim the global affection Federer and Nadal have had throughout their careers.

The reality is, Djokovic came to the party after Federer and Nadal had established dominance at the top of the game and was instantly viewed as the outsider in a rivalry the sporting world was already loving.

Novak is only player to consistently beat the two fans’ favourites over the last decade and at the end of his career, he will have the titles and records that confirm he is the greatest player of all-time.

Who cares if he occasionally smashes a racket or loses his temper? The great winners are all terrible losers and when Djokovic suffers a rare setback, he deals with it badly. Maybe losers in life don’t understand what it takes to be a winner.

Losing a couple of games at the Olympics in a season when he could complete a calendar Grand Slam is not a cue to promote eulogies more apt at the end of a career, so Djokovic fans need to take a step back, appreciate how great their champion is and ignore the negativity that always floats around him.

Djokovic and his fans may be frustrated by their collective failure to be hailed as the most popular tennis player of them all, but the bigger picture has to be that holding the title of the game’s all-time GOAT is a far more important – and that is coming Novak’s way.