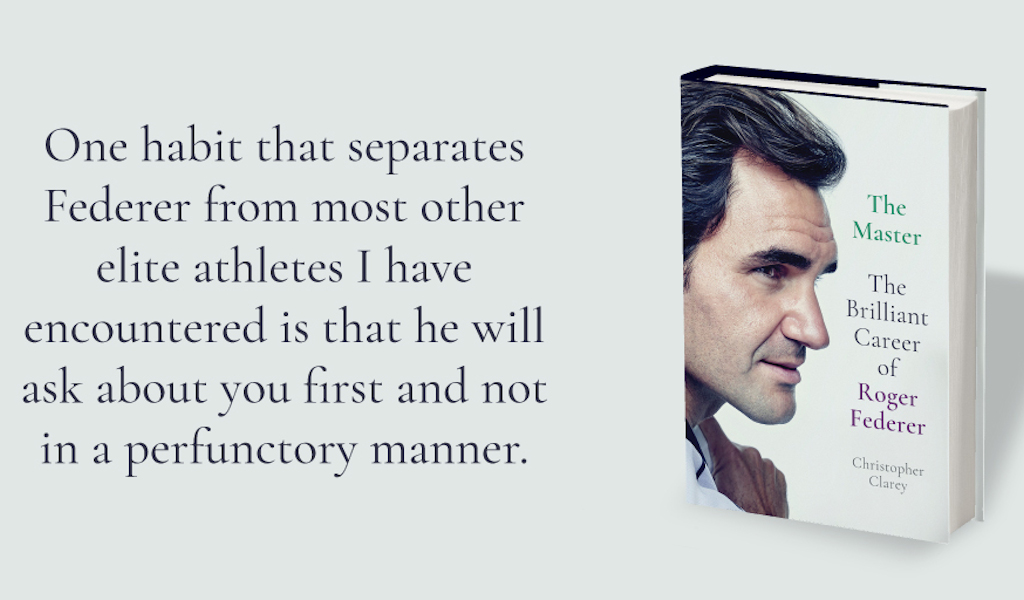 He has reported on the life and career of Roger Federer for two decades and now respected writer Christopher Clarey has released a book that shines a light on the most popular player in tennis history.

The Master is available to buy now and we asked the respected New York Times writer to give us an insight into his time covering Federer on tour and how he pieces together his fascinating insight into one of the greatest tennis players of all time.

Christopher Clarey, tennis writer for the @nytimes, chats with @tennisfiles about his book that was released today: "The Master: The Long Run & Beautiful Game of Roger Federer."

What was the idea behind The Master?

The access I have had over the years has been pretty exceptional thanks to the New York Times and the Herald Tribune and I wanted to get it all down there while it was still fresh in my mind.

I really wanted to do a book that looked at Federer’s career while also keeping that journalistic distance and hopefully what I have come up with works well. I have structured it in a way that allows all the global connections he has with the world to come through and while it is structured in a chronological way, I wanted to get into his process of how he handles his day to day and how he has grown as a person.

Why did you feel this was the moment to release the book?

I really sensed that after the loss to Djokovic in the Wimbledon final in 2019 that his main body of work was done then. He was already beating the odds to be as good as he was at that age and with Novak rising again and the young players being as good as they were that it was a good time to take a summation of him.

Ever wondered about the secrets to Federer's success?

You have covered Federer for 20 years, so gives us an insight into how he has handled the media?

He really grasped early on that he needed to have a good connection with those who reported on him. You can see that he has that with the Swiss press who have followed him throughout his career and they have a good human connection with him. For me, he has always been very good to deal with and when he sits down with the media, he does the job properly.

Where do you stand on the great tennis debate over who is the greatest player of all time?

The word greatest is a subjective word and you can interpret it in so many different ways. I have resisted using it in tennis because of the Open Era aspect of it and for so long, the best players didn’t play all the Grand Slam tournaments. You have to remember that back then, taking part in each event wasn’t expected. I have interviewed Rod Laver and Ken Rosewall and they will confirm their Grand Slam count wasn’t discussed. Pete Sampras changed the tone around this as he set out to chase Roy Emerson’s Grand Slam record and wanted it to define him. That set the bar for the players that followed him.

So is there an argument to suggest Roger Federer’s impact on the sport should be considered when the debate over ‘the greatest’ is raised?

While it’s hard to compare players from different eras to the current group of players, we can compare players competing now and it is an interesting debate. Does it come down to their performance and achievement on the court or is also about what they have brought to the sport? In that situation and with a wider lens, Roger’s argument is gets stronger as he has had. A huge impact with fans and people outside of the sport of tennis. I won’t make a call on who the greatest of all time, but Novak will win that debate on pure results.

We will have more from our chat with Christopher Clarey on Tennis365 in the coming days and his fascinating book The Master is available here.