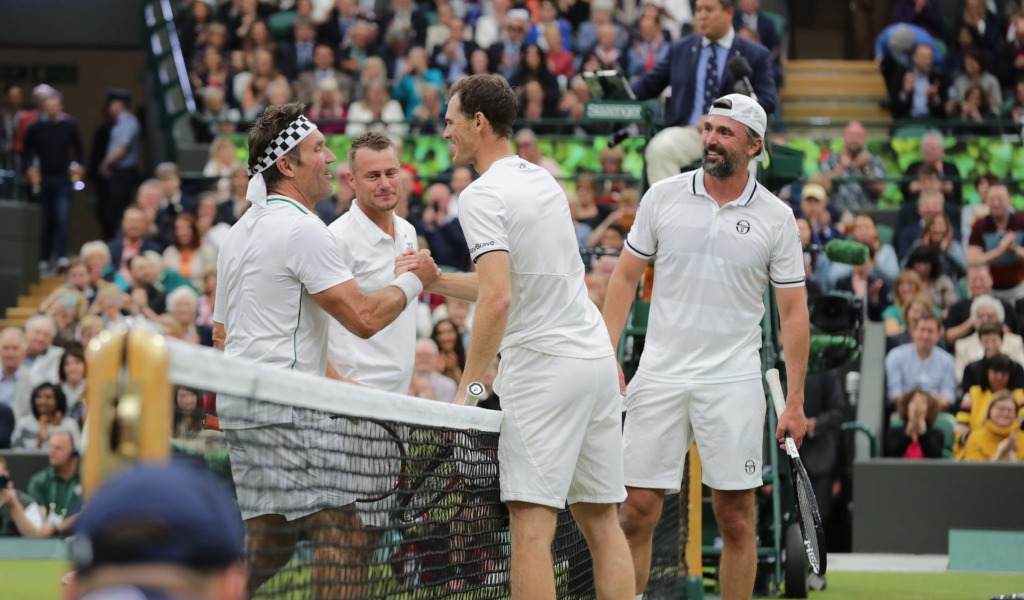 Former Wimbledon champion Lleyton Hewitt took centre stage as Wimbledon’s revamped No.1 Court opened for business on Sunday, with the roof that has been in construction for the last three years given a first run out on a showery afternoon in London.

Hewitt offered up these comments after his Wimbledon return, as he gave his insight into playing in warm conditions under the roof on No.1 Court.

How was that?
LH: “Yes, pretty special, to be out there. Obviously, the opening of Court 1 with the new roof on it, an unbelievable atmosphere as well and to think the middle of May and the grass was just playing so true out there.”

How does it feel to be back?
LH: “Yeah, it’s fantastic, you know I always love walking into the All England Club and it holds obviously such special memories for me back in 2002 and I actually played an epic quarter-final match on Court 1 as well so it brings back a lot of those emotions and memories every time I come back on to that court.”

Did the atmosphere feel different with the roof closed today?
LH: “Yeah, it always does, it’s so similar to Centre Court now as well with that atmosphere of when the crowd erupts as well, it’s so hard to actually hear yourself out there it’s so loud. You get goose bumps walking out and obviously with all the music out there today under the roof it’s pretty special.”

You’ve probably had your fair share of rain delays over the years, how much of a difference will having a second roof make here?
LH: “Oh, it’s going to make a huge difference. I think so also obviously for TV and spectators to be able to play two matches and I’ve witnessed that in the Australian Open where we have three roofs now as well on match courts and to have two now out there, it’s so important for the crowd to be able to enjoy the tennis, especially later on in the tournament, where you can start getting backed up on matches, it’s going to be a lot fairer for a lot of those players.”

Does the court feel different than before, in terms of atmosphere and how it feels to walk out?
LH: “Oh, especially with the roof. It’s just a lot louder, obviously there’s nowhere for that noise to go so it really builds up and I was fortunate to play a couple of times on Centre Court with the roof, so it’s such a similar feel to that now but I’m sure all the players are going to have a great time when they get the opportunity to play with the roof closed.”

Can you tell us about the charity and the support for them today?
LH: “It’s fantastic. Obviously playing for the Wimbledon Foundation as well and it’s pretty special to give back obviously to the sport and the Wimbledon Foundation has done so much to try and get kids involved in tennis and I think that some of us guys that have had 20 plus years careers have been very fortunate to be around the world and play this fantastic sport, so this is just a small way for us to give back.”