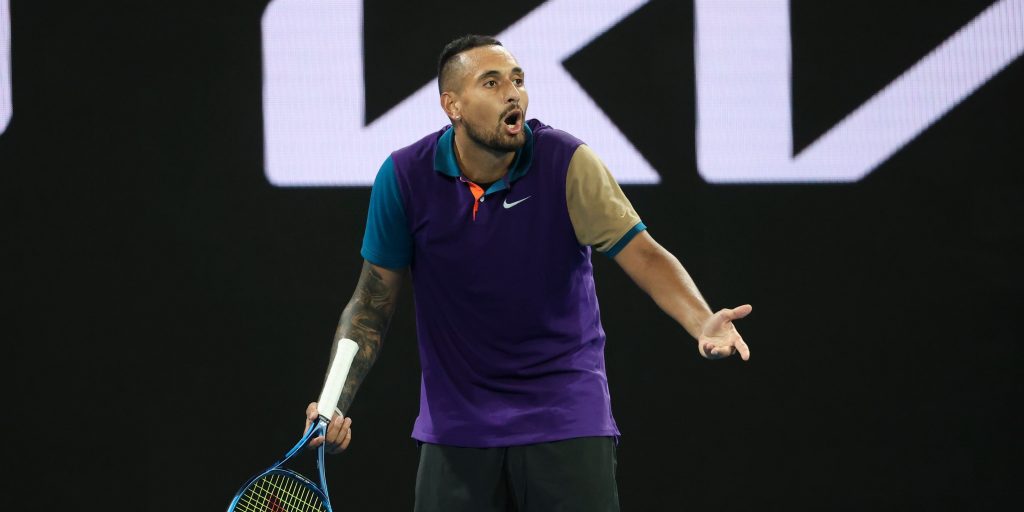 So Nick Kyrgios is bad for tennis? This debate needs to be put to bed.

While there will be purists who will always cherish the more traditional, finer delicacies of a five-set feast that can only be served up in a Grand Slam contest, the sport’s greatest showman is the contrast tennis so badly needed.

As ever in a Kyrgios match, there were aspects of his 5-7, 6-4, 3-6, 7-6 (7-2), 6-4 win over Ugo Humbert that were hard to explain, yet anyone who witnessed this latest epic will confirm it was one of the most captivating sporting occasions in some time.

The presence of spectators is very much a novelty at this year’s Australian Open and there is little doubt that without them cheating on their local hero on John Cain Arena, Kyrgios would never have found a way to win.

Yet on a night when he saved two match points in the fourth set and served up an array of brilliance and madness that was as captivating as it was unfathomable, the great maverick of tennis found a way to book a third round meeting with US Open champion Dominic Thiem.

That's one way of dealing with the net sensor 😂

It's #LetGate deja vu for Nick Kyrgios and the umpire 😬#AusOpen pic.twitter.com/C5PAF1xLJG

The backhand passing shot that saved one of Humbert’s match point at 5-4 in the fourth set was the work of a genius and that is most certainly what Kyrgios is, even if he is not a maestro moulded from a more formal tennis mould.

"One of the craziest matches I've ever played!"

It's not often you find Nick Kyrgios speechless… #AusOpen pic.twitter.com/EbzoJp1C8W

Now Kyrgios can beat world No 3 Thiem in what is certain to be the night match on Rod Laver Arena on Friday, with former world No 1 Mats Wilander telling Eurosport that the Aussie needs to go deep in a major event to back up the hype he generates.

“It’s a typical situation for Nick Kyrgios – does he have enough hours in repetition on the practice court to be able to threaten someone like Dominic Thiem after the match like he had today against Humbert?” ssked Wilander.

“We’ve seen it in the past that it’s tough for him to come back but it’s a scenario that’s being repeated at the Australian Open nearly every year. Nick plays a great match on that court, maybe two matches, and then he comes and plays a better guy and he’s running out of steam a little bit because it’s so emotional for him to play.

“On paper, it’s great – it’s a fast court, Nick can serve out of his mind. It’s a tough match and Nick will have to hit a lot of aces to have a chance in that match you would think.

“I think he needs to win this type of match if he is to go to that next level. He needs to prove to himself that he can win a match like that and take out one of the best players in the world in the following round. That’s what he hasn’t done.

“We know he can win five-setters, but can he back it up, and actually win the next round against a world-class player? That’s the question.”