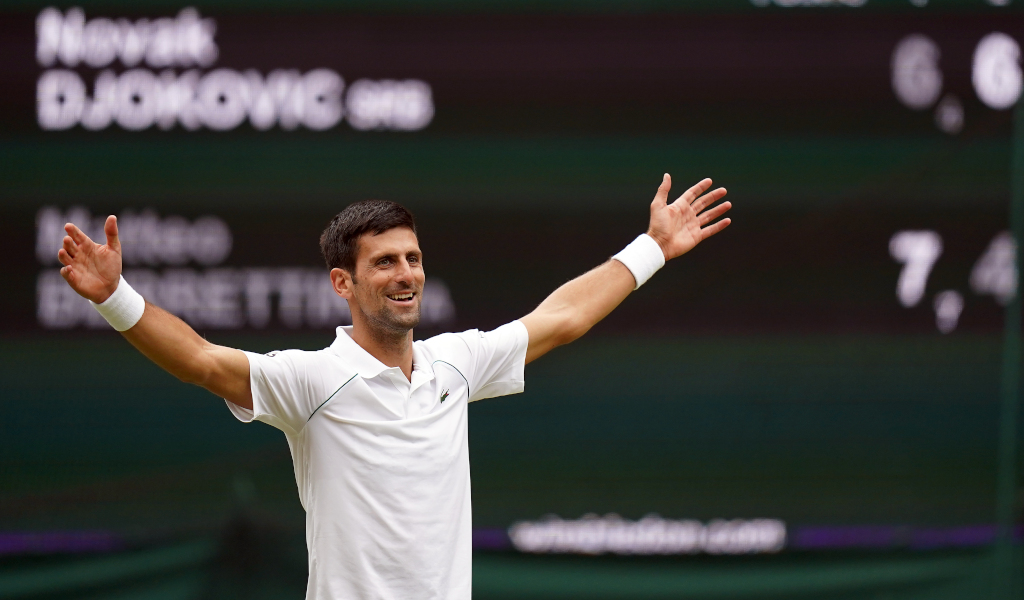 Even on a day when he cemented his legend once and for all, Novak Djokovic found himself almost apologising for daring to interfere with the legacy of the game’s enduring greats.

As the world No 1 secured his sixth Wimbledon title with a 6-7 (4-7), 6-4, 6-4, 6-3 victory against misfiring Italian opponent Matteo Berrettini in a curious final on Centre Court, Djokovic drew level with Roger Federer and Rafael Nadal by joining his long-time rivals with 20 Grand Slam titles.

It was a win that allowed him to claim the third leg of what looks increasingly likely to be a career-defining Calendar Grand Slam after his wins at the Australian Open and the French Open, with his dream to be recognised as the greatest of all-time now certain to be backed by statistics.

Yet this was an afternoon that confirmed, once again, that he still faces a huge battle to claim the prize that means just as much to him – the adulation of the tennis family.

As has become customary down the years, the Wimbledon crowd very much sided with whoever was playing Djokovic in the final, with the cheers when he missed a shot and the gaps when Berrettini failed to take the chances that came his way clearly annoying the champion.

Congrats Novak on your 20th major. I'm proud to have the opportunity to play in a special era of tennis champions. Wonderful performance, well done!

He complained to the chair umpire about the spectators shouting out at the wrong moments and gesticulated to his detractors in the stands mid-way through a crucial third set, but Djokovic has got used to the lot he has drawn.

Whatever he does and for however long he does it, Federer and Nadal still have a edge on him in the popularity stakes and he event found himself competing on the ‘other two’ as he stood on Centre Court with the famous golden Wimbledon trophy in his grasp.

“I have to pay a great tribute to Rafa and Roger,” said Djokovic in his on-court interview. “They are legends of our sport. The two most important players I ever faced.

The final words of that quote said much about the steely determination he has to win the battle he believes he can win and the one that, ultimately, means more than any other.

On a day when Djokovic became the first player to move through the $150million prize money barrier, money has not been a motivation for this defiant sporting giant, who finds a way to win on days when he is not at his best.

This was one of those occasions, as he looked nervous from the off and struggled to find his best form throughout, but he was fortunate to be up against an opponent in Berrettini who missed his chance to step through the door Djokovic opened for him.

By the time we got to the fourth set, there was an sense of inevitability around Djokovic’s victory and when it arrived, the relief flowed as much as the joy.

Next up is the chance to win Olympic gold and then try to add US Open glory to a collection that will make this the perfect tennis year for Djokvoic.

So maybe the time has come for Djokovic to focus on the prize he can control.

Even if he can’t overhaul Federer and Nadal as the most popular tennis players of all time, at least he can now see a path to a plinth that will allow him to be hailed as the greatest tennis player that ever lived.

It is a crown he is almost certain to claim.