Roger Federer has confirmed that he will not play in the Tokyo Olympics, in a move that will fuel rumours he may be considering retirement.

The former world No.1 citing a recurrence of the knee injury that has kept him off the court for an extended period of time over the last two years, even though he claimed he had not suffered a reaction to his long-time injury problem after his Wimbledon exit.

The manner of Federer’s 6-3, 7-6, 6-0 against Hubert Hurkacz led to questions over whether Federer would continue his career, with his 40th birthday looming next month.

Now he has confirmed his Olympic dream has come to an end as he released a statement on his social media accounts.

“During the grass-court season, I, unfortunately, experienced a setback with my knee, and have accepted that I must withdraw from the Tokyo Olympic Games,” said the 20-time Grand Slam champion.

“I am greatly disappointed, as it has been an honour and highlight of my career each time I have represented Switzerland. I have already begun rehabilitation in the hopes of returning to the tour later this summer. I wish the entire Swiss team the best of luck and I will be rooting hard from afar. As always, Hopp Schwiz!” 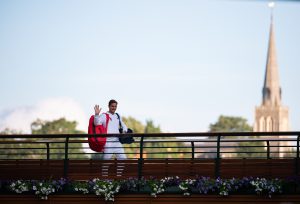 Federer has often spoken about his desire to challenge for a singles gold medal in the Olympics, which is one of the few titles that has eluded him down the years.

Yet that now looks certain to remain a hold on his remarkable record, as he will sit out the Tokyo Games, while considering whether to continue looking forward to the US Open next month.

“For me, now that that’s over, you just got to reassess everything,” he said after losing at Wimbledon.

“As you can see, it was a struggle for me and putting in extra effort all the time, especially when things get difficult against Felix in Halle or today against Hurkacz.

“I knew it was going to be really hard, to be honest. Now I just got to talk to the team, take my time, not feel rushed by you guys or anybody else, for that matter. I got to take my time, take the right decision, the one decision I want to take and where I feel most comfortable.”

A further announcement on Federer’s future can now be expected before the US Open build-up gets underway at the start of August.