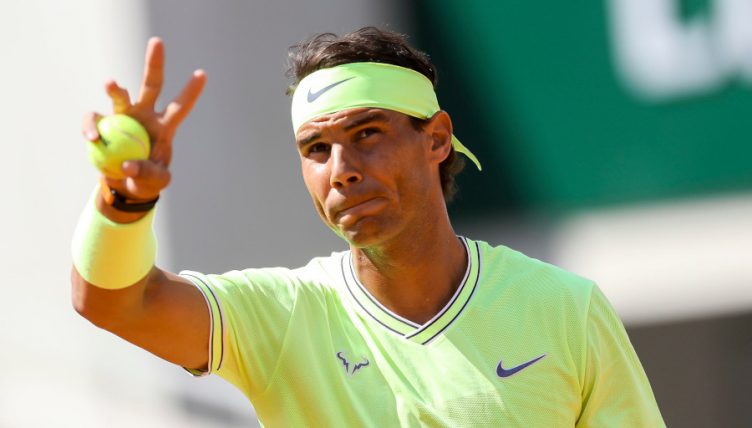 A very different French Open gets under way at Roland Garros on Sunday with the Parisian Grand Slam being played in the autumn rather than the spring and with only a handful of fans, there are many questions about how things will play out.

Here are five talking points for the clay-court fortnight.

To make a British person feel at home, everyone has been talking about the weather at Roland Garros. Pictures have abounded of players taking to the court in coats and woolly hats, and the cold, damp weather could have a big impact on results.

The ball will not bounce as high or spin as much, potentially favouring players who prefer hard courts. The new Wilson balls, meanwhile, were strongly criticised by Rafael Nadal and will make conditions even slower, while the new Philippe Chatrier roof is another unknown factor.

If Nadal wins a 13th French Open title, he will equal Roger Federer’s men’s record of 20 Grand Slam trophies. The Spaniard has only ever lost two matches on the Parisian clay and must always start as the favourite but that status has been questioned this time.

As well as the conditions, which are widely considered to favour Novak Djokovic, Nadal is a player who gains confidence from matches in his legs. He has had just three of those since February and a loss to Diego Schwartzman in Rome last week was potentially a bad omen.

Another Grand Slam, another chance for Serena Williams to equal Margaret Court’s record of 24 Slam singles titles. With each passing slam, the certainty that Williams will one day get over the line lessens, and Roland Garros is probably the least likely venue for it to happen.

Williams performed well at the US Open in reaching the semi-finals but an Achilles problem caused her to pull out of Rome and she has not played a clay-court match since last summer. The American has also just turned 39. No one in tennis would write her off, but time is running out.

Been a long journey to get back on Court Philipe Chatrier. 3 and half years since I played @stanwawrinka85 in a brutal 5 set semi final which turned out to be the end of my hip. It was a pleasure to be back @rolandgarros and a huge thank you to the @fftennis for giving me the opportunity to play here again 🙏 The new stadium with the roof looks amazing and all the changes and improvements they have made for the players is much appreciated👍 @castore_sportswear @headtennis_official #tennis #paris

What a joy it is to see Andy Murray back on a clay court for the first time since his hip problems flared up in 2017. The final straw was a semi-final at Roland Garros against Stan Wawrinka, so a first-round draw against the Swiss on Thursday fell firmly into the category of you could not make it up.

Murray will be firmly second favourite against the 2015 champion but he would not be in Paris if he did not feel he could at least be competitive. It is just a shame there will not be a full house to see it.

It would be a major surprise if the men’s champion was someone other than Nadal, Djokovic or US Open winner Dominic Thiem. In the women’s tournament, though, there are once again a whole host of potential challengers.

Simona Halep, the winner in 2018, is the favourite but the heavy conditions may not favour her. The likes of Williams, Garbine Muguruza and Elina Svitolina are prominent in the odds but it would be no surprise if another young talent followed in the recent footsteps of Jelena Ostapenko, Naomi Osaka, Ashleigh Barty, Bianca Andreescu and Sofia Kenin by lifting a slam trophy.