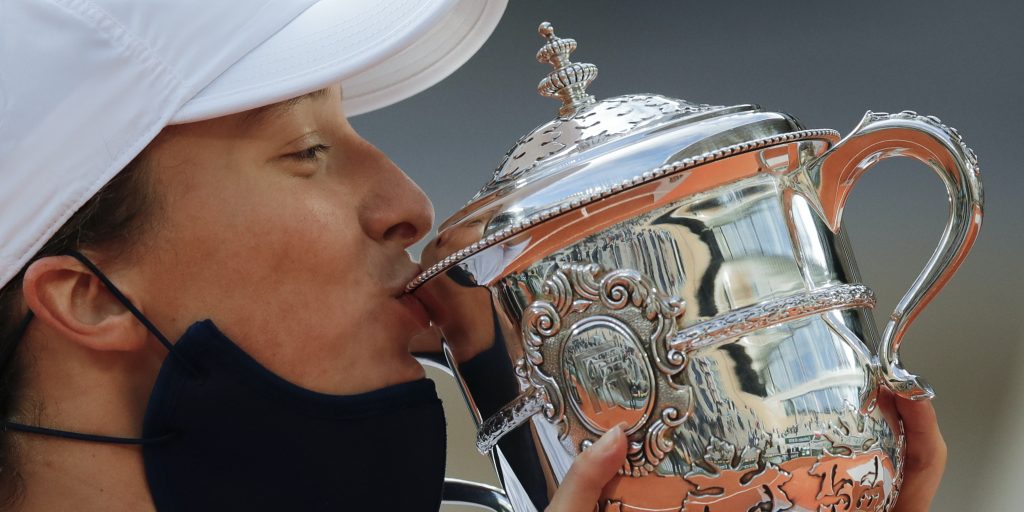 Iga Swiatek announced herself as tennis’ newest teenager superstar by winning the French Open title at Roland Garros on Saturday.

The 19-year-old from Poland defeated Sofia Kenin 6-4, 6-1, winning all her matches at the tournament without dropping a set.

Swiatek’s father, Tomasz, was an Olympic rower who competed in the quadruple sculls event at the 1988 Games in Seoul. Her initial foray in sport came in swimming, but Swiatek told ausopen.com earlier this year: “I was scared of water so tennis was much better for me.”

Swiatek’s tennis marks her out from her fellow teenagers but so does her musical taste. Classic heavy metal and rock is her preferred genre and she walks out for matches listening to the likes of AC/DC and Guns N’ Roses.

Swiatek’s walkout tune this fortnight has been Welcome to the Jungle by Guns N’ Roses. Asked about it following her quarter-final victory, Swiatek said: “I wanted to change it because right now it’s kind of boring to listen every day to the same song. I stayed with Guns N’ Roses because I wanted to win.”

Swiatek is a keen student and she combined her tennis career with finishing high school, where her favourite subject was maths. She described this season as her gap year before she decided whether or not to go to university. The decision has surely now been made.

This is Swiatek’s second time lifting a grand slam trophy. Her first came at Wimbledon in 2018 when she proved herself to be head and shoulders above her peers by sweeping to the junior title, convincing herself in the process that she could play on grass.

Swiatek is unusual in not just using a sports psychologist but travelling with one. And it was a very happy birthday for Daria Abramowicz as she watched the teenager lift the Coupe Suzanne Lenglen.

“I just believe that mental toughness is probably the most important thing in tennis right now because everybody can play on the highest level,” said Swiatek. “But the ones that are tough and that can handle the pressure are the biggest ones. So I always wanted to develop in that way.”