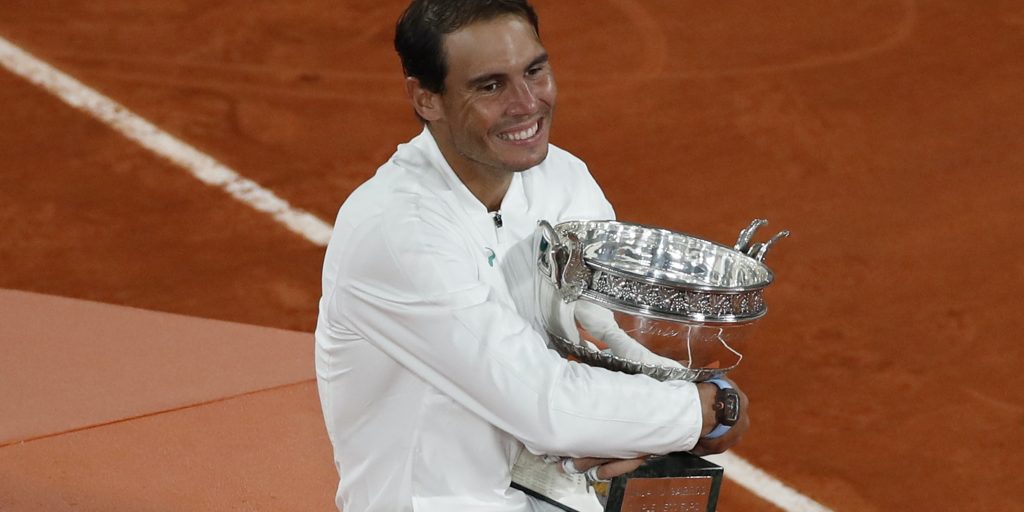 Rafael Nadal extended his otherworldly record at the French Open by collecting his 13th men’s singles title on Sunday to move level with friend and rival Roger Federer on 20 Grand Slams and pull three ahead of Novak Djokovic.

Who is the greatest of them all is a debate that will rage for years to come but Nadal’s bulging haul of Coupe des Mousquetaires means even the most ardent Federer or Djokovic fans cannot dispute the Spaniard’s supremacy on clay.

While Federer and Djokovic have their own enviable records at Wimbledon and the Australian Open respectively, the manner in which Nadal has racked up a baker’s dozen is just as scarcely believable as his number of titles.

Here, the PA news agency takes a deeper look at Nadal and his beloved red dirt in Paris.

Players with 20+ Grand Slams in the Open Era:

What a crew 💪#RolandGarros pic.twitter.com/eQuRI74Evl

An unexpected 6-0, 6-2, 7-5 trouncing of Djokovic on Court Philippe Chatrier moved Nadal to 100 wins at Roland Garros, where he has only been beaten twice in 16 years. Robin Soderling paid for his 2009 victory by losing to Nadal twice over the next two years and while Djokovic prevailed in 2015, it is his only triumph in eight attempts against his rival. On the Parisian clay, at least, Nadal is Sugar Ray Robinson to Djokovic’s Jake LaMotta.

The colder conditions and heavier balls in this year’s rearranged French Open led to Nadal casting doubt on his ability to retain his title, but he did not drop a set all tournament – the fourth time this has happened in his career, having done likewise in 2008, 2010 and 2017. What sometimes gets overlooked is how rarely Nadal is stretched to breaking point as only in two matches has he been taken the full five sets. Big-serving American John Isner caught Nadal cold in the 2011 first round and there was a titanic tussle against Djokovic in the 2013 semi-final. On both occasions, though, Nadal came through.

Only in 21 out of 102 matches has an opponent managed to take a set off Nadal, which adds credence to the theory that beating the 34-year-old at Roland Garros is the toughest task in sport today. His win-loss record in sets alone stands at 298-27. To put that into some sort of context, the last male to have won the French Open more than once is Gustavo Kuerten, a champion in 1997, 2000 and 2001, who is rightly revered in Paris and whose win-loss record in sets stands at 113-51.

How do his contemporaries compare?

I have always had the utmost respect for my friend Rafa as a person and as a champion. As my greatest rival over many years, I believe we have pushed each other to become better players. Therefore, it is a true honor for me to congratulate him on his 20th Grand Slam victory. It is especially amazing that he has now won Roland Garros an incredible 13 times, which is one of the greatest achievements in sport. I also congratulate his team, because nobody can do this alone. I hope 20 is just another step on the continuing journey for both of us. Well done, Rafa. You deserve it.

Nadal’s 98 per cent winning record at the French Open is understandably the best by a male at any of the four grand slams – Bjorn Borg’s 96 per cent at the event is second. Federer’s astonishing career has seen him reach the landmark of 100-plus wins at both Melbourne and Wimbledon. The darling of Centre Court, the Swiss holds the most titles at SW19 with eight, and 101 wins and 13 losses gives him an 89 per cent success rate. Djokovic, meanwhile, has the most Australian Open titles and his 75-8 record there gives him a 90 per cent win rate.