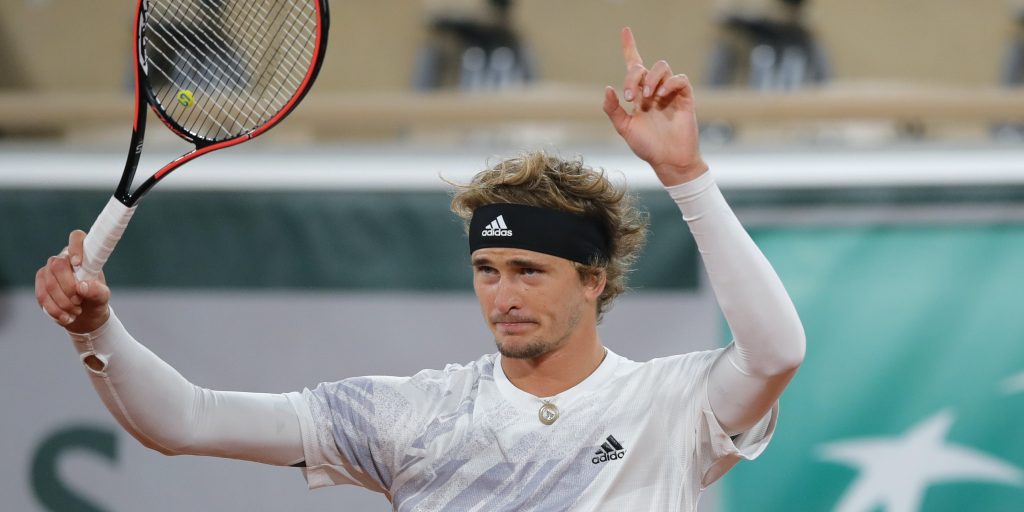 Alexander Zverev put the disappointment of his agonising US Open final defeat behind him with a convincing win in the opening round at Roland Garros.

The German was playing a match for the first time since losing to Dominic Thiem in New York after leading by two sets to love and serving for the title.

Zverev recharged on a boat at home in Monaco and was relatively untroubled by another Austrian, Dennis Novak, in Paris, coming from 5-2 down in the opening set to win 7-5, 6-2, 6-4.

All Smiles for Sascha 😁

Zverev closes out play on Chatrier with a 7-5 6-2 6-4 win over Dennis Novak.#RolandGarros pic.twitter.com/7f6t7yVlAz

The sixth seed said: “Physically I’m fine. Mentally obviously it was difficult for me. The following days after New York, I mean, you don’t want to be the first man in 70 years or whatever it was to lose a Grand Slam final from two sets to love up.

“In my mind I was also happy for him, because he is a friend to me. I do believe that he is going to win more Grand Slams, but I think the one in New York was quite important for him.

“I know how close I’ve gotten. I had one hand on the trophy, but I do believe that I can win them now.

Jannik Sinner is the only teenager in the top 100 and one of the hottest prospects in tennis, and the 19-year-old Italian pulled off an impressive upset to start the day by beating 11th seed David Goffin 7-5, 6-0, 6-3.

Sinner, making his senior debut at Roland Garros, won 11 games in a row from 5-5 in the opening set to 3-0 in the third and confidently polished off his Belgian opponent.

Goffin revealed afterwards that he has struggled with the mental demands of playing tennis in the coronavirus pandemic.

He said: “It’s the motivation, I would say. You feel kind of worried all the time. Before every tournament you don’t know if there will be a wrong test or you will be positive, negative. Every week it’s different rules. In your private life also it can be just not easy. I was a little bit empty.”

The American has been vocal in calling for fewer restrictions, and he said: “I think it’s important not to freak out too much if someone gets too close to you. We’ve got to get back to normal here.

“Normal behaviour, in my opinion, is very much needed. I’ve taken a few photos outside the hotel. They don’t allow fans inside the hotel. We keep our distance. Our masks are on. It’s totally safe. I would feel safe if we didn’t take all these precautions, as well.”

Fresh from beating Rafael Nadal in Rome, Diego Schwartzman was the most emphatic winner of the day, beating Miomir Kecmanovic 6-0, 6-1, 6-3.

It was a victory for Frenchman Benoit Paire just to be on court after he was barred from the US Open following a positive test for Covid-19 and then tested positive again last week in Hamburg.

The only positive in Paris came with his performance in a 7-5, 6-4, 6-4 victory over Kwon Soon-woo of South Korea.

Former semi-finalist Marco Cecchinato had to qualify this year and he produced an upset with a 7-6 (11-9), 6-4, 6-0 victory over 25th seed Alex De Minaur, while 24th seed Borna Coric fell to Norbert Gombos.