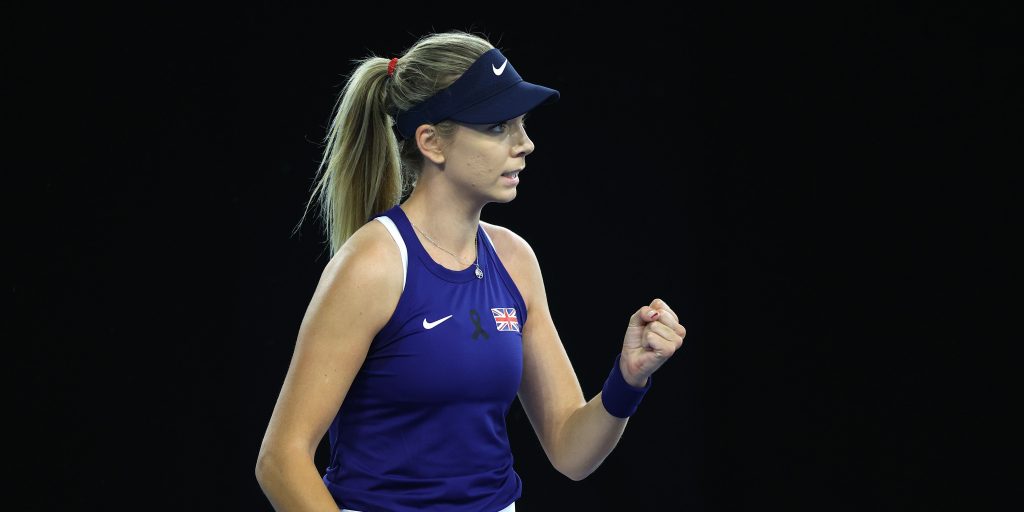 Boulter won two matches to secure a 3-1 victory in the behind-closed-doors play-off at the National Tennis Centre in London, maintaining Britain’s place at the elite level of the competition formerly known as Fed Cup.

Britain were heavy favourites even without number one Johanna Konta but suffered a hiccup on Saturday morning when Heather Watson was beaten by 285th-ranked Marcela Zacarias.

That put the pressure on Boulter, who had to wait for three hours while the tie paused to ensure there was no clash with the Duke of Edinburgh’s funeral.

But she once again showed she is a player more than capable of handling pressure situations with a 6-4, 6-1 victory over Giuliana Olmos, her seventh win from eight singles matches in the competition.

Boulter is ranked down at 291 having failed so far to return to anywhere near the heights she achieved two years ago, when a back injury aggravated in guiding Britain to victory over Kazakhstan in the same competition sent her tumbling out of the top 100.

She is one of nine British women in the world’s top 300 but only Konta and Watson are inside 100, with Harriet Dart and Francesca Jones between 100 and 200.

Keothavong did not hold back in stressing she expects better, saying: “I’ve got a lot of belief in our players. The players who were part of the team this week, I think every single one of them has the potential to be in the world’s top 100 but it’s going to take a lot.

“For those who aren’t quite there yet, they need to be able to take responsibility of their own tennis. There are no shortcuts but a lot of people believe in them and they need to find that belief within themselves as well.

“No blaming others. There are lots of people who can provide the support if they need it. It’s there for them, they just need to grab the opportunities and get on with it and not allow themselves to be distracted by unnecessary things.”

The victory sends Britain through to a first-round match next February, where they will have another shot at qualifying for the 12-team finals event.

If Boulter can show more of the power tennis and competitive grit that she produced in victories over Zacarias and Olmos, there is no reason she cannot push on significantly – providing she can put together a good schedule.

The 24-year-old has used up all the opportunities provided by a protected ranking for those players who have long injury breaks, and the women’s calendar on the second-tier ITF Tour has been badly affected by the pandemic.

“I knew it was going to be a tough match but I needed to keep my head down, get the job done and I really did that well.

“I feel like my game’s in a really good place. As I showed at the start of the year in Australia, it’s there, it’s ready to come out, it’s just a matter of doing that consistently.

“I really think it’s going to get there, it’s just a bit of patience.”

Boulter did not watch the Duke of Edinburgh’s funeral as she prepared to take to the court, but said: “I believe quite a few people had it on in the team room.

“Of course we wanted to show our respect. I felt like I needed a bit of time to prepare myself right before my match so I spent a bit of time on my own with my headphones in and keeping myself focused.”

Keothavong gave the nod to Boulter over higher-ranked players and was fully vindicated, saying of the Leicestershire player: “She loves the big stage. She’s a big-match player.

“She’s delivered in the past, she delivered again here this week. She’s a player I have a lot of belief in. I think she can go a long way.”

Watson defeated Olmos on Friday but produced an error-strewn display against Zacarias, who played well above her ranking for a 6-3, 7-6 (7-1) victory that was the best result of her career.