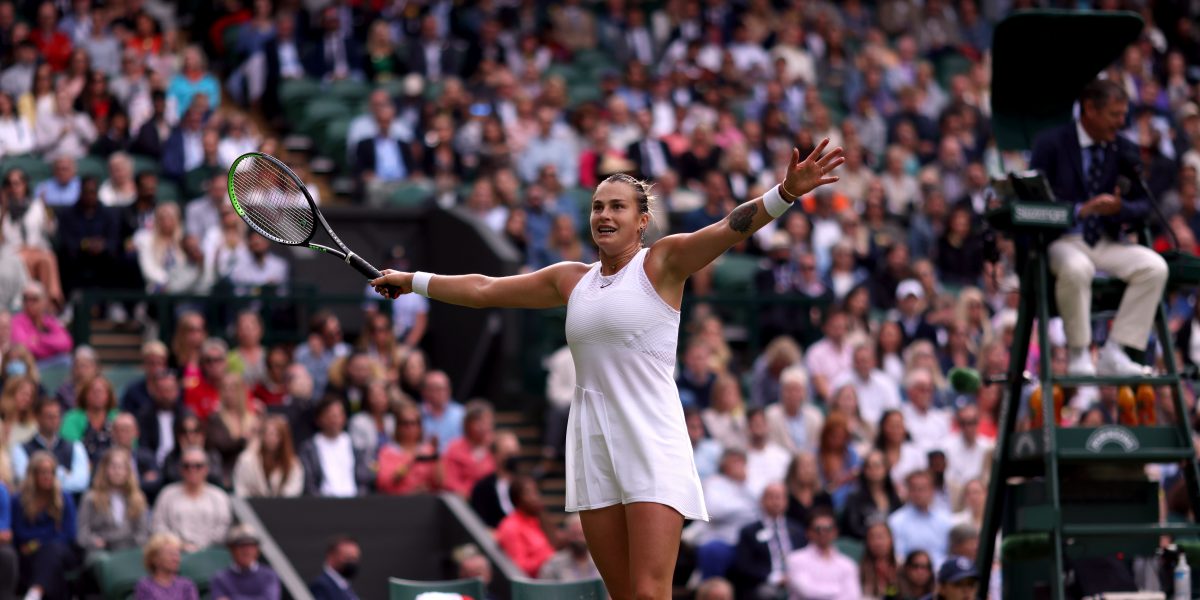 On a day where several seeds tumbled at Wimbledon, the number two seed came through a tough battle against Boulter, winning 4-6, 6-3, 6-3.

She recovered from a difficult start to silence a partisan crowd and progress to the third round.

“I’m proud that I actually could get through this match because I was really emotional in the beginning and I didn’t really feel the surface out there,” said Sabalenka.

“She was playing really great. Of course, the crowd was supporting her more.

“I felt like everything was against me, and I’m really happy that I could, like, separate myself from the people and everything, and just think about my game, what I have to do.

“So really proud that I could stay focused and keep fighting for every opportunity I had.

“I was really nervous because I knew there’s a lot of people there supporting her. It’s Centre Court. I haven’t play on the Centre Court yet. Like I didn’t know what to expect.”

Fourth seed Sofia Kenin’s horrible 2021 continued as she crashed out in the second round.

The American, who won the Australian Open in 2020, was beaten 6-2, 6-4 by compatriot Madison Brengle to become the biggest casualty of the women’s draw so far.

Kenin only made it to the second round at this year’s Australian Open and got to the fourth round in the French Open.

She said: “I really did not feel my game. Of course she played well. She’s playing well, obviously. I just feel like leading up to Wimbledon I didn’t have enough preparation on the grass.

“I kind of had like a minor injury leading up to Wimbledon, which is why I had to pull out of Eastbourne.”

Fifth seed Bianca Andreescu also went out after losing in the first round to Alize Cornet.

The former US Open champion, who is seeded fifth, was playing just her second ever match at SW19 and first since 2017, but was taken down 6-2, 6-1.

The match was postponed on Tuesday because of rain and Andreescu will wish it never started on Wednesday.

Third seed Elina Svitolina did prevail with a 6-3, 2-6, 6-3 win over Alison Van Uytvanck in her delayed first-round match.

And she is dreaming of a third round date on Centre Court, followed by watching her native Ukraine beat England in Euro 2020.

Seventh seed Iga Swiatek also made it through beating Vera Zvonereva 6-1, 6-3, while 2015 champion Garbine Muguruza is looking in ominous form as, after only dropping one game in her first round win, she posted an impressive 6-1, 6-4 victory over Lesley Pattinama Kerkhove.

Venus Williams, 41, potentially played her last match at Wimbledon as she was beaten 7-5, 6-0 by Tunisian Ons Jabeur.