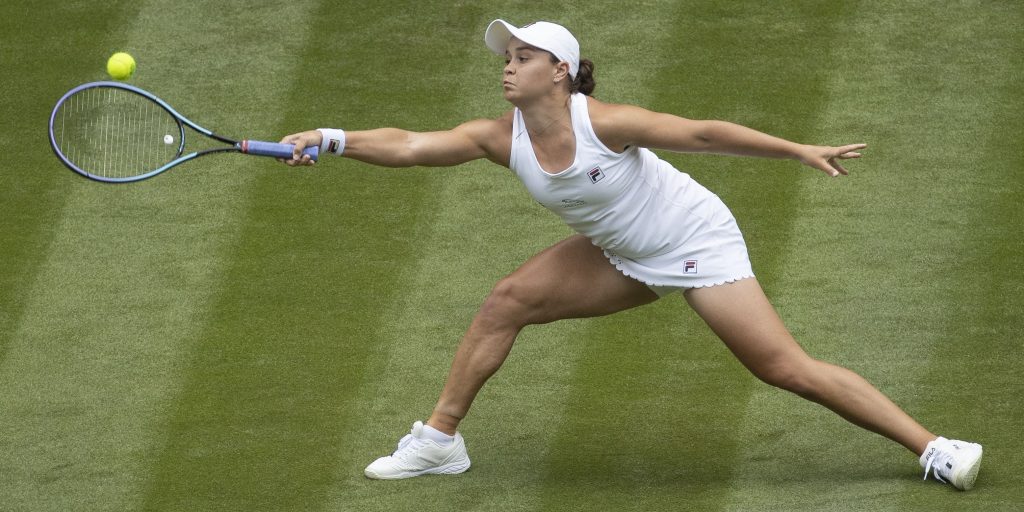 World number one Ashleigh Barty is feeling “ready” to mount a challenge for a second grand-slam title after making it through to the quarter-finals at Wimbledon.

The Australian, the 2019 French Open champion, made it past the fourth round at SW19 for the first time after a 7-5, 6-3 win over Barbora Krejcikova.

Barty had to pull out of the most recent tournament at Roland Garros with injury, but she is feeling fit again and is preparing to go even further at the All England Club.

“I’m feeling great. I’m feeling ready,” she said. “Obviously getting more and more matches is really nice to be able to feel the court under my feet.

“The focus in between matches is exactly how it always is. It’s recovery and prioritising that recovery.

“Always been a massive part of my career. Being able to do that this week has been great.”

Angelique Kerber showed who was the Centre Court boss by ending Coco Gauff’s run at the fourth round.

Kerber has fond memories of the main show court at SW19, having won the title in 2018 and reminded everyone why with a 6-4 6-4 win over the teenage prodigy.

Twelve months after Kerber’s triumph, Gauff became the new sweetheart of Centre when she broke on to the scene as a 15-year-old and she has followed that up this year.

But she came up against an opponent who had the skill to absorb Gauff’s power and Kerber eased to a comfortable victory.

Karolina Pliskova is also in the last eight for the first time, completing the set at all four grand slams after a 6-2 6-3 win over Liudmila Samsonovic.

The Czech has been a curious performer at SW19 as her game is suited to this surface but never really performed.

However, she is playing with freedom which she says can help.

“I am super happy that I made it in singles. So now finally it’s my last grand slam which I was missing to go to quarters.

“I feel quite free no matter how like the first part of the season was or even the tournaments before, but I just said that before I felt like actually quite good on court no matter the results, and that’s the mindset which I keep having for the days here.

“Quite positive, even though like let’s say some results were not really the way I wanted, but I think we are working quite hard to feel this way.

“I mean, if I feel like this and if I play like this, I think that’s why the matches go like this. So hopefully it can stay a bit longer.”

Second seed Aryna Sabalenka is also enjoying a maiden run to the last eight at a grand slam, but has eyes on a bigger prize following a 6-3 4-6 6-3 triumph over Elena Rybakina.

“This is not my final goal. I’m trying to be happy but at the same time be focused and be ready for the next one because it’s also not easy match.

“But of course I’m really happy I finally broke this wall. I’m in the quarter-finals and really looking forward for the next match. Hopefully I can keep going.”

She will meet Ons Jabeur after the Tunisian’s fine run continued with an impressive 5-7 6-1 6-1 win over Iga Swiatek.

Karolina Muchova made it back-to-back last-eight runs at Wimbledon after a 7-6 (8) 6-4 success against Paula Badosa while Viktorija Golubic is another debutant at the quarter-finals after a 7-6 (3) 6-3 win against Madison Keys.