Ashleigh Barty satisfied with her performance on injury return at Wimbledon

World No 1 Ashleigh Barty was pleased with her level of performance after a hard-fought win over Carla Suarez Navarro in the first round at Wimbledon on her return from a hip injury.

The top seed battled through after one hour and 44 minutes on Centre Court following a 6-1, 6-7 (1-7), 6-1 victory over an opponent who was playing at the All England Club for the last time.

Suarez Navarro will retire at the end of the season having only recently recovered from Hodgkin lymphoma and while she impressive fought back from a break down to level in the second set, Barty proved too strong with 38 winners and 13 aces overall.

Having come through her first match on grass in two years, the 25-year-old said: “To be able to go out there and play the way I did was really nice and overall it was a really solid match to start things off.

“It was an opportunity to test myself against someone who has proven it over a massively successful, long career.

“You have to compete at the very best to match with Carla and I felt I was able to go to that level, so overall happy to get a start here at Wimbledon, play a solid match and now we work our way through the tournament the best we can.”

A 25-minute opening set sent a message to her rivals, but Barty found life tougher afterwards and the majority of the second went on serve.

It was the top seed who registered the first break and served for the match only for her 33-year-old opponent to hit back and produce flawless tennis to clinch the tie-breaker.

That was as good as it got for Suarez Navarro, who could not handle the quality of the former French Opener winner in the decider but was given a special farewell from the Centre Court crowd.

Barty joined in the applause and added: “She is a hell of a competitor and hell of a fighter.

“It was a privilege to share the court with her today because I hadn’t had that opportunity to play Carla and it was really special to experience what she can bring from the other side of the court. 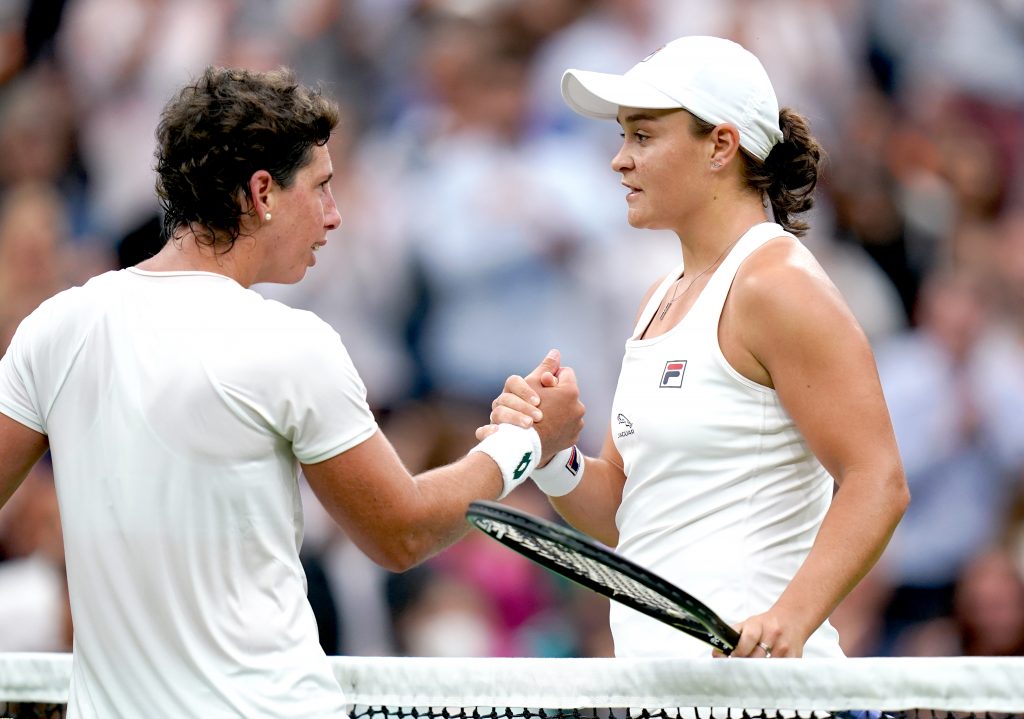 “All credit goes to her for her resilience to come back from the adversity she has faced and to be able to have that moment with her was nothing short of remarkable.”

Suarez Navarro’s mum was a popular figure in the crowd and continued to snap the occasion on her phone at every opportunity.

The Spaniard, who will represent her country in the Olympics at Tokyo later this summer, was emotional during the final exchanges and admitted her last day at Wimbledon was perfect.

“I am in love with this tournament, this court and this crowd,” Suarez Navarro admitted.

“A long time off court, so I was a little nervous but in the second set I play a really good game and I was enjoying the match.

“I was trying to do my best and I know what I have to do to win. But my body is not the same as two years ago and I was tired.

“Still I cannot ask for anything else better than this day. One of my last match, here against Ash, number one, Centre Court, with the roof. It was amazing. I am the most happy player.”
]Follow us on Twitter @T365Official and like our Facebook page.