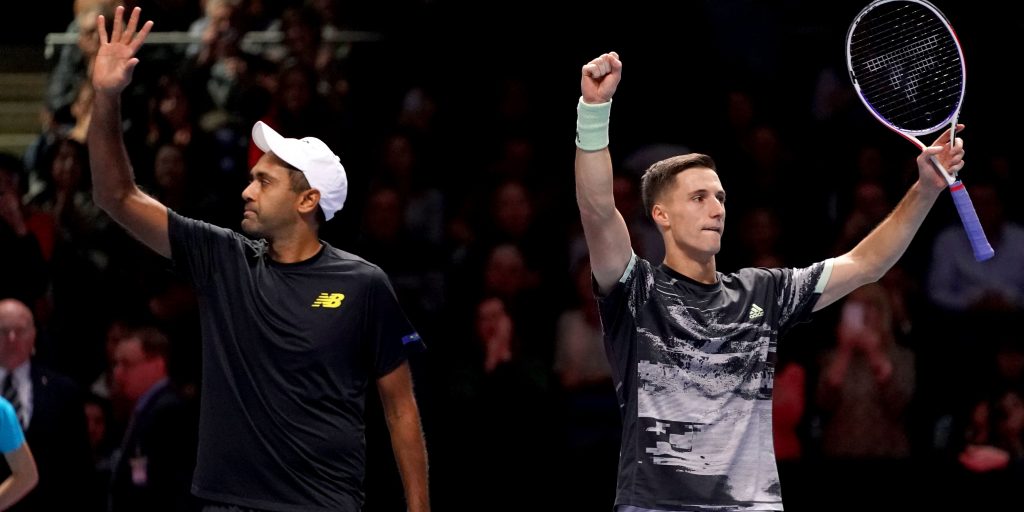 Joe Salisbury has his sights set on becoming a multiple Grand Slam champion after he and Rajeev Ram reached a second consecutive Australian Open men’s doubles final with victory over Jamie Murray and Bruno Soares.

Murray and Soares were looking to repeat their 2016 triumph after reuniting at the start of the season but it was defending champions Salisbury and American Ram who came out on top of a tight contest, winning 6-4, 7-6 (7-2).

Salisbury said: “It was a tough one. Very tight match throughout. We got off to a bad start, were broken, 3-0 down. I think we were a bit frustrated about that, and I think it was good that we got back on serve straight away.

1⃣1⃣ @AustralianOpen wins in a row…

“Then, we played really well the rest of that set. I’m sure they were pretty frustrated that they let that lead go. But then we felt good. Then the second set was really tight. I think we both weren’t serving as well as we can. I felt like they were a little bit on top in the second set.

“But we knew if we got it to a tie-break we’d have a great chance. We managed to get through that in two sets.”

It is rare for British players to find themselves on opposing sides of the net at the latter stages of Grand Slams but Salisbury was able to put nationality aside.

He said: “Obviously we really wanted to win. It was the semi-final of a Grand Slam, so you’re going to want to win just as much whoever you’re playing against.”

Salisbury and Ram will play ninth seeds Ivan Dodig of Croatia and Filip Polasek of Slovakia in Sunday’s final bidding to make it 12 straight wins at Melbourne Park.

At 28, Londoner Salisbury is a relative youngster in the world of doubles and he sees no reason why he cannot go on to win many more major titles.

He said: “I knew it was possible but maybe didn’t think it would be so early on in my doubles career. I definitely think after last year when we won I knew that I could win lots of Grand Slams and that’s the goal.”

Salisbury and Ram’s achievement is all the more impressive considering they did not practice together between November’s ATP Finals and a week before the Australian Open after the American was confined to his hotel room for a fortnight as one of the players in hard quarantine.

The defending champs are into the final!@RajeevRam/@joesalisbury92 keep their #AO2021 title hopes alive with a 6-4 7-6(2) win over Murray/Soares.#AusOpen | #AO2021 pic.twitter.com/Cw9TNV8F7F

Salisbury is thankful it was not the other way around, saying: “It was tough for him, obviously not ideal being 14 days without being able to practice or get out of the room at all, physically and mentally tough.

“I think he dealt with it pretty well. Of all the people for it to happen to, he’s not a bad person. It was better it was that way around and not me in the 14 days and him out. I think I would have struggled a lot more.

“One of his best qualities is that he just hits the ball so well. He hits it clean. I think it only took him a few days when he came out to be feeling like he was hitting OK. It was more just physically how his body would hold up.

“After a week or so he was kind of feeling back to normal, and obviously now we have had a few weeks so he’s feeling good.”

Ram is also through to the mixed doubles final but Salisbury missed out on facing his partner for another trophy as he and American Desirae Krawczyk lost out 7-5, 5-7 ,10-8 to Australian duo Matt Ebden and Sam Stosur.