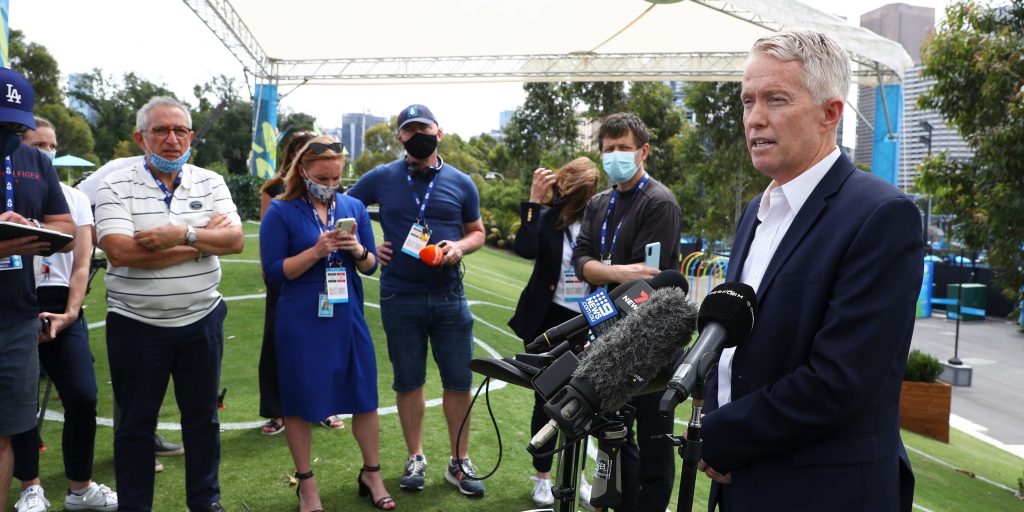 No matches in the six warm-up events being held at Melbourne Park were played on Thursday after an employee at one of the hotels used for the two weeks of quarantine tested positive for the coronavirus on Wednesday.

More than 500 players and support staff deemed casual contacts are having to isolate until they receive a negative test but all the matches scheduled for Thursday have been moved to Friday, where forecast rain presents another headache.

Tournament director Craig Tiley told a press conference: “This does give us three days for the lead-in events to complete. Obviously tomorrow we’ve got some challenging weather, so we’ve got to work around that as well, and the intention is to start the Australian Open on Monday.

“We’re absolutely confident the Australian Open’s going to go ahead. We know we’ve got a period now we’ve got to work through with those players and their staff that needed tests. The probability is very low that there’s going to be any issue, we fully expect them all to test negative.

Tiley and his team have spent months negotiating arrangements to allow the tournament to happen, including funding charter flights and quarantine hotels for players and their support teams, and he added: “We want this to happen and we’ll do whatever to make it happen.”

There were plenty of complaints from players regarding the two weeks of quarantine, especially after it emerged that 72 would have to spend the entire period in their rooms following positive tests for people on three of the flights.

Tiley insisted there were no grumblings this time, though, saying: “The players have been remarkable. When we made the calls last night they completely accepted it. They’ve all gone and got tested. They’ve been really good and very appreciative of the opportunity to play.”

It is not known how the man who tested positive caught the virus, and this incident, which has meant restrictions have been reinstated for all Melburnians, will add fuel to the fire of those who believe the tournament should not have taken place.

Tiley said: “We’ve all been through a tough time for the past year and we would not have made this decision to go ahead without the full endorsement and support of the Victorian Government.

“There’s no such thing as no risk, there’s always going to be risk and the objective is to minimise that as best as possible.”

The draw, which had been scheduled for 7am UK time on Thursday, has been pushed back to the early hours of Friday.