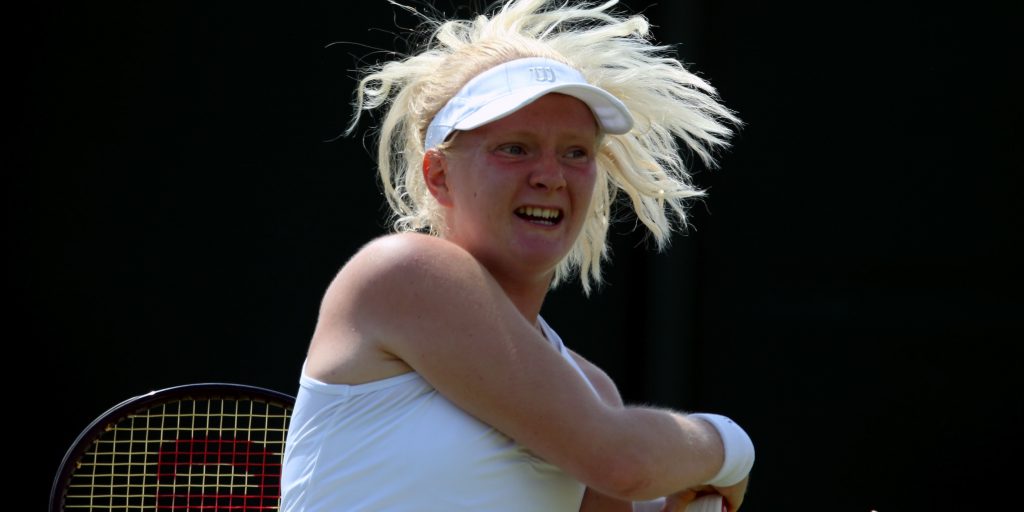 Francesca Jones hopes she can be the Beyonce of tennis as she continues to spread her inspiring message.

The 20-year-old from Bradford is preparing for the next step in her career with her grand slam debut at the Australian Open after coming through qualifying.

Jones, who will play American Shelby Rogers, was born with the genetic condition ectrodactyly ectodermal dysplasia, which affected the development of her hands and feet.

She only has six fingers – plus two thumbs – and seven toes and plays with a specially adapted racket.

Jones is very willing to talk about her condition and the impact of it, and hopes she can provide inspiration to others with her achievements.

Asked about her childhood idols, Jones cited Serena Williams, Rafael Nadal and Amelie Mauresmo, but top of the list is American megastar Beyonce.

“I’m a pretty big Beyonce fan,” said Jones. “I love her feminism. I love how she uses her platform to make a difference. That is something that I, obviously, would like to do.

“I hope I am doing that in a very, very small way now and hopefully I can build on that in the future.

“I think Beyonce is an incredible role model – everything that she has done against racism, for females across the globe. I think she is a phenomenal woman.”

There are many ways in which Jones is not your average 20-year-old tennis player. Her childhood ambition before she left home at nine to move to a Spanish tennis academy was to study at Oxbridge – something she may pursue after her playing career – while she stays away from social media.

During her two weeks of quarantine she spent little time watching TV and could instead be found listening to music, with her head in a book or researching Melbourne restaurants she wanted to visit.

She said of her dislike of screens: “Sometimes I feel unproductive. I like to do things that I feel are helping me to grow as a person.

“Don’t get me wrong, I love sticking ‘Friends’ on in the background when I’m cooking or when I’m sorting whatever it is I’m sorting out. I do watch the odd thing, but you’ll rarely see me sat in front of a screen.

“I’m happy leading a private life. I’m happy sharing the important moments of my life with my inner circle. I don’t like the influence social media has on children, on teenagers.

“It frustrates me how it sways someone’s opinion. I’m quite an opinionated person and I like to create my own opinions, so I don’t wanted to be swayed by someone’s post or a picture.”

Food is a big passion and she estimates she spent an hour planning each restaurant visit.

“I honestly love that I am being asked about food – this is like the most important thing for me being over here,” she said.

“I have been to Italian, Argentinian, I was at a Middle Eastern place last night. I went to an Asian place. I am literally just picking and choosing from each cuisine. I create lists for every city I go to and I tick them off.”

Jones is strikingly mature and self-assured, and her decision to leave home at such a young age is surely a big factor.

She trained at Barcelona’s Sanchez-Casal Academy – where Andy Murray also spent time – between the ages of nine and 16 before moving to a different academy in the same city.

She is supported by the Lawn Tennis Association through its Pro Scholarship Programme as one of the best 16-24 olds in the country.

Jones said: “I was a stubborn little kid so I knew what I wanted and I think that focus every day distracted me from what I had left behind in the UK. Of course it’s tough not to see your parents, not to go home to your mum’s cooking and put yourself to bed.

“I didn’t know anything different and I knew what could help me achieve what I wanted to do in the short term as well, so you look back and think there are occasions I missed out on with my parents and my family but you have got to keep an eye on the bigger picture.”